The next step in the liquid-cooled 'New Gen' Sportster plan has already been revealed, courtesy of images of a base model that leaked via a survey sent to some Harley customers.
The online survey included six pictures of a future 'Standard' Sportster to complement the 'S', complete with traditional bobber styling and a twin-shock chassis, but on the Revolution Max water-cooled DOHC engine that debuted in the Pan America and Sportster S.
The sharp eyed may have noticed three snatched close-ups of the bike in the official reveal video for the Sportster S that was shot in Scotland - no doubt as a teaser for the next step in the master plan.

While the Sportster S bucks tradition by using monoshock rear suspension, upside-down forks and high-level exhausts, the base model Sportster will feature much more familiar styling. The front gets a circular headlight with a small cowl around it above conventional forks and a large 19in front wheel.
The frame - made up of small front and rear subframes with the engine as a central, structural component - appears to be identical to the Sportster S, but the swingarm is different, with twin shocks mounted on alloy extensions either side of the bobbed rear fender. The rear wheel is much smaller than the front, probably 16 in in diameter, wrapped in a specially designed Michelin tire.
The tank is similar to the Sportster S, with the normal Sportster shape, but the seat is significantly lower and there's more rear bodywork. Mid-mounted footrests replace the forward controls on the S, and there's a very apparent radiator in front of the engine - Harley is making no attempt to pretend this is an air-cooled bike, so there are no fake cooling fins or attempts to hide the radiator.
A two-into-one exhaust, seen in Harley's official teaser images, is also apparent in the leaked pictures. Much lower than the Sportster S system, it leaves space for pillion pegs above it, which means saddlebags will also be viable. 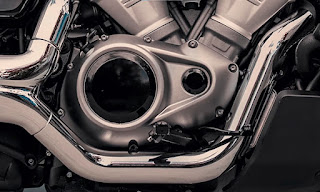 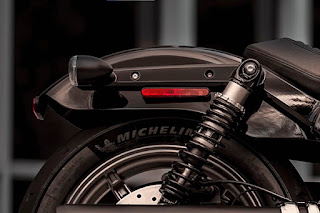 What's unclear at the moment is the detailed specs of the engine. The Sportster S has a 1,252 cc version of the Revolution Max, sharing the Pan America's variable valve timing but significantly detuned with a peak power of 121 bhp instead of the adventure bike's 150 hp.
However, with slimmer forks and a single front brake disc, with a conventionally mounted caliper instead of the radial unit on the S, the base Sportster is likely to have less power.
Harley has already developed a 113 hp, 975 cc version of the Revolution Max engine, originally due to have been launched this year in the since-cancelled 'Bronx' streetfighter - which is also expected to appear in a future version of the Pan America. This smaller engine seems a likely initial choice for the base Sportster. 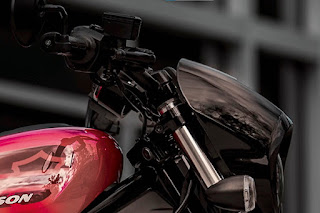 Just as the old Sportster range featured 883 and 1200 models, the new line-up will eventually use both 975 cc and 1,252 cc versions of the Revolution Max. Options look likely to include silver, bronze or black engines, chrome or black exhausts and silver or black wheels. Harley's official teaser images imply that the version with silver wheels, silver engine and a chrome exhaust appears to have been given the green light.