According to the latest data from RAI Association, BOVAG and RDC in the Netherlands, 2020 saw the highest number of new motorcycles sold in the Netherlands in more than a decade with 14,622 new units registered, an increase of +4.7% compared to 2019 (13,962 units).
In addition, the "specialist trade sold an absolute record number of 52,175 second-hand motorcycles. The corona crisis is having a major influence on travel behaviour," says RAI spokesperson Floris Liebrand. 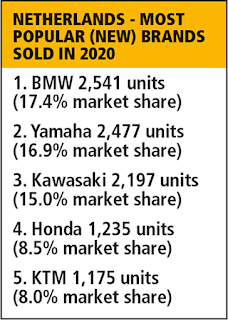 "Since the crisis started last March, the need for individual transport has grown. This is not only noticeable in the sale of bicycles and scooters, but also in the registrations of new and second-hand motorcycles - this despite the international lockdowns in the spring, which halted the supply of parts and the production and distribution of two-wheelers worldwide.
"As a result, new engines already on order could not be built and stores were not stocked. From the summer months on, there was a clear catching up that continued until the end of the year."
"RAI Vereniging and BOVAG are happy with the popularity of the motorcycle. Motorcycling is 'in'. People not only opt for the great experience of motorcycling, but also for the practical side. The moto is ideally suited to move from A to B quickly, safely, cleanly and hygienically in today's society.
"The potential is enormous, as only half of the 1.5 million Dutch motorcycle licence owners currently own a motorcycle. Moreover, the moto fits into an urban mobility policy, with parking space at a premium. The sector is also accelerating its efforts to improve sustainability with the development of cleaner engines."