Is Harley Dreaming of an Electric Strip?

Is Harley Dreaming of an Electric Strip?

Press released just a few days before Harley announced it was to end its hugely successful Factory Drag Racing relationship with Vance & Hines in favor of supporting dealership race efforts (coincidence?), a new 10-minute video released by Harley blows more smoke in the direction of the LiveWire and an electric future for drag racing. 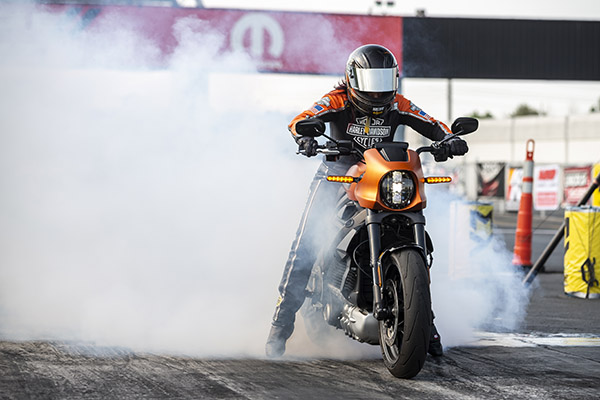 "Science of Speed" allows enthusiasts to "see what it takes to win in the NHRA Pro Stock Motorcycle championship and the future of drag racing with the 10-time champion Harley-Davidson Screamin' Eagle/Vance & Hines drag racing team. Team racers Eddie Krawiec, Andrew Hines and Angelle Sampey talk through the skills, strategies and experience of running a motorcycle through the quarter-mile dragstrip."
"Science of Speed" looks at how electric vehicle propulsion will change the sport of drag racing by comparing a 2020 Harley-Davidson FXDR motorcycle to a 2020 Harley-Davidson LiveWire motorcycle. "With the LiveWire motorcycle's immediate torque and seamless twist-and-go acceleration, the racers are immediately aware of what the future of fast can bring: more time for preparation before launch, thrilling, instant acceleration and seamless speed to the finish line."

As reported in September 2020, Sampey, a three-time Pro Stock Motorcycle champion, set new records for elapsed time and top speed by an electric-powered production motorcycle with the LiveWire on a drag racing course. "She stepped off her Harley-Davidson FXDR™ Pro Stock competition motorcycle to pilot the LiveWire bike to capture world record-breaking runs on the quarter and eighth-mile, covering the eighth-mile distance in 7.017 seconds and the full quarter-mile course in just 11.156 seconds at 110.35 mph. The 2020 LiveWire motorcycle's top speed is limited to 110 mph."Maybe the possibility (probability) of an all-electric future for drag racing, of all classes, indeed of entirely new class concepts, has got something to do with its race program rebuild, maybe it hasn't.Maybe, in drag race terms, the dealer teams that the factory will look most kindly on for a share of their support dollar largesse in the future will be those who develop LiveWire based endeavors. Maybe, maybe not. What price a Harley pimped electric Drag Race class or series?If new CEO Jochen Zeitz remains serious about the electric future and going back to Harley's legacy in order to build its future - an important part of which was building brand through track success - then why not? Just sayin'!
Posted by Onno "Berserk" Wieringa www.madnessphotography.nl at 17:38