Harley-Davidson Looks Set To Go Ahead with the Chinese Made, Benelli Derived 338R

Harley Looks Set To Go Ahead with the Chinese Made, Benelli Derived 338R

By Ben Purvis
Having forged a deal with Chinese firm Zhejiang Qianjiang, parent of Benelli, Keeway, Generic and the newly-launched QJMotor brand, Harley-Davidson has been quietly working on a Chinese-made, small-capacity model for more than a year.
Despite the upheaval following the departure of H-D CEO Matt Levatich in early 2020 and a wholesale change of plans introduced by his replacement, Jochen Zeitz, the project appears to remain on track for a 2021 launch.
When Harley first announced the project in 2019, the firm showed two sketches of the new machine. However, more recently, design patent drawings have emerged showing precisely what it will look like. The designs confirm that the frame, swingarm, forks and engine design are the same as the Qianjiang-made Benelli 302S, but it loses the Sino-Italian machine's rather nondescript styling in favor of a flat track-inspired shape.
The 338R's planned 338 cc capacity appears to come from using the short 45.2 mm stroke from the Benelli 302S's 300 cc parallel twin combined with the 69 mm bore from the same firm's larger 500 cc model. Since Harley announced its project, Qianjiang has announced another model based on the same mechanical components - the QJMotor SRK 350, which features a 353 cc version of the same engine thanks to the 45.2 mm stroke and an even larger 70.5 mm bore.
Early prototypes of the SRK 350 even featured the words 'Harley-Davidson Motor Company' cast into the engine covers.

The similarities between the three machines - Benelli's 302S, QJMotor's SRK 350 and Harley's 338R - mean we can take an educated guess at its weight and performance. Both the 300 cc and 353 cc engines made around the same power - 38 hp - although the larger motor peaks at 9,000 rpm and the smaller one at 11,000 rpm. The 338 cc Harley is likely to split the difference. Weight will be around 180 kg.
The small parallel twin is intended not for the West, but as a means to bring the Harley name to customers in developing markets around Asia. By putting a low-cost Harley onto those markets, the idea was that as riders there become more affluent, the firm's more luxurious offerings will pick up sales. 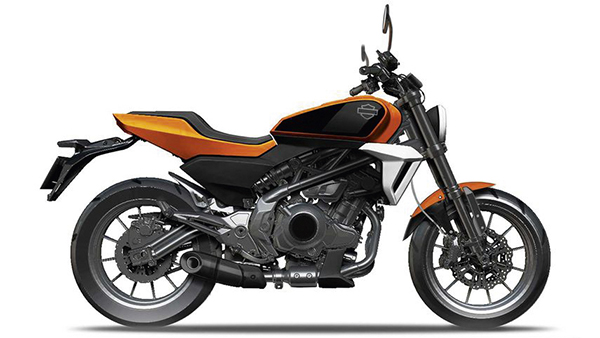 Although Zeitz has overturned much of Levatich's ambitious 'More Roads to Harley-Davidson' plan for the future, canceled the water-cooled Bronx streetfighter that was shown in late 2019, and pulled the brand out of 39 markets to refocus on Harley's core products, elements of Levatich's scheme have survived.
The 1,250 cc water-cooled Pan America adventure bike, for instance, and the similarly engined but as yet unnamed custom bike that was previewed in 2018, have survived the cull. At the moment, it seems that the 338R has also remained on track, perhaps because its development was already well advanced when Zeitz took the reins.
Asked about the small displacement bike during Harley's Q2 earnings presentation, he deflected the question, saying: "As I said, we would like to reveal our products much closer to actual launch. And whether and when we are going to launch specific products is not something that I would like to elaborate on right now. We will provide further detail in the fourth quarter. At this point, there's really nothing new to say about that."
However, investor-relations documents from the latest presentation still list "the Company's ability to … develop and maintain a productive relationship with Zhejiang Qianjiang Motorcycle Co., Ltd. and launch related products in a timely manner" as an important factor in the firm's future results.