Vance & Hines and H-D to Race in Different Directions

Vance & Hines and H-D to Race in Different Directions

In what has to be fall-out from CEO Jochen Zeitz' Project 'Rewire', the hugely successful Harley-Davidson and Vance & Hines' 20-year race partnership is to end, with both businesses taking new paths to checkered flag glory.

It is not known what, if any, role the recent success of the Latus Motors H-D race team's AFT success may have played in Harley's decision to reposition its race efforts - the Gladstone, Oregon dealership delivered Harley its first 'new era' AFT Championship title when James Rispoli won the riders' and manufacturers' Production Twins Championship on the XG750R at Daytona on the final weekend of the rebuilt 2020 AFT series.

Vance & Hines has stated that with Harley choosing not to field factory racing teams in American Flat Track (AFT) or NHRA drag racing in 2021, it will be redeploying its racing development team "towards creating high performance products for a variety of vehicles, brands and race series in both two and four-wheel segments.
"We thank Harley-Davidson for being a partner with Vance & Hines for 20 years. Together, in AFT and NHRA, we have celebrated 116 wins and 11 championships," said founder Terry Vance. "Harley-Davidson has been one of the best partners we've ever had."
The company has said that the Indy Operations Team will be refocused on performance products for two and four-wheel vehicles and will be redeployed under the name Vance & Hines Racing Development Center (RDC).  "Vance & Hines will continue its racing tradition in 2021 with sponsored riders in a variety of racing series."
In addition, Vance & Hines will remain the sole licensee, manufacturer and seller of Harley-Davidson XG750R Production Twins motorcycles and Harley-Davidson XG750R Super Twins motorcycles. This racing variant of the Harley-Davidson Street 750 was the motorcycle with which Rispoli and Latus Motors won the AFT Production Twins championship in 2020. The Production Twins bike is being manufactured and shipped to Harley-Davidson dealers at this time. 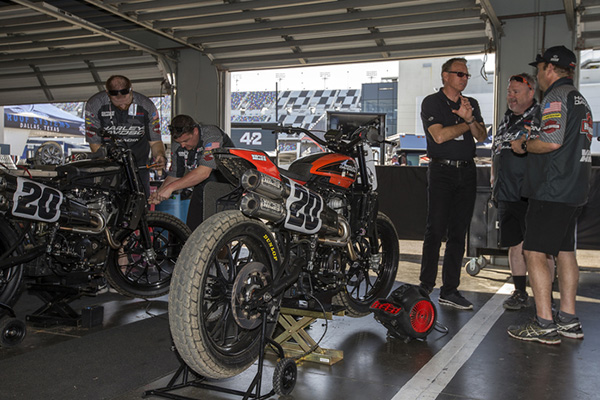 "Vance & Hines is having its best year in over a decade. We're strong and we have a strategy that drives our growth and expansion in our current markets and in new ventures," said Mike Kennedy, President and CEO. "While we loved our time running the factory race teams for Harley-Davidson, we couldn't be more excited about the future."
Vance & Hines has been contracted to run factory race teams for a range of companies during its 41-year history including Suzuki, Yamaha and Ducati. The partnership with Harley-Davidson was focused on drag racing and flat track racing.
Meanwhile, in what is an interesting move and one in-line with what is known so far about the firm's future intentions in terms of supporting "stronger and better dealers," Harley-Davidson has said that it will "refocus racing efforts on dealers' competitive programs" with support in AFT SuperTwins, Production Twins and NHRA Pro Stock Competition.
In doing so it says it is "harkening back to the foundations of the company's competitive spirit by refocusing on building within the brand and celebrating the heritage of grassroots flat track racing by offering support to its entire dealer network through the development of contingency programs." 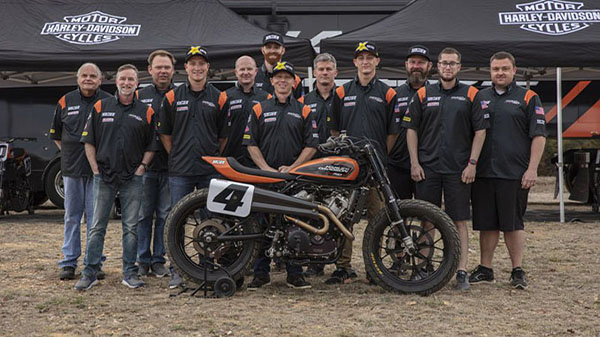 "Harley-Davidson's heritage is rich with racing lore and legacy, and throughout our brand's history, Harley-Davidson dealers have been the cornerstone of our racing programs," said Jon Bekefy, General Manager of Brand Marketing. "We are excited to continue to support the XG750R racing motorcycle and NHRA Pro Stock Motorcycle efforts through our dealers."
The company went on to say that "as it leans into a more grassroots approach, Harley-Davidson would like to thank the Vance & Hines organization, the riders, team members, and every individual involved with the Screamin' Eagle/Vance & Hines NHRA Pro Stock Motorcycle and American Flat Track (AFT) team efforts for their passion, commitment and expertise for over a decade of winning competition and championship titles.
"Over the past 18 seasons, the Screamin' Eagle/Vance & Hines NHRA Pro Stock Motorcycle team has been wildly successful, generating 107 wins and ten championships, proving to be one of the most successful programs in the history of the sport.
"Additionally, Vance & Hines has been instrumental in ushering a new era of flat track competition with the development of the Harley-Davidson XG750R SuperTwins and Production Twins motorcycles and earning a championship in AFT Production Twins for the 2020 season. Vance & Hines will continue to manufacture and support the sale of XG750R SuperTwins and Production Twins bikes to qualified teams.
"In a return to the foundations of Harley-Davidson's racing efforts, the company will refocus efforts by offering support to dealer racing programs in 2021, including the development of contingency programs for AFT. To kick off, Harley-Davidson is already committed to supporting Latus Motors Harley-Davidson as they campaign their XG750R in the AFT SuperTwins series."
www.vanceandhines.com
www.harley-davidson.com
www.latus-hd.com
Posted by Onno "Berserk" Wieringa www.madnessphotography.nl at 07:07