POOR ROAD SURFACES CAUSE MORE THAN 500 ROAD ACCIDENTS in U.K.

Fewer potholes are now being repaired

Poor or defective road surfaces, one of the major causes of motorcycle accidents, were a contributory factor in more than 500 reported road accidents. That’s according to analysis by TrackDays.co.uk, a leading track day provider, of the latest figures from the Department for Transport (DfT). 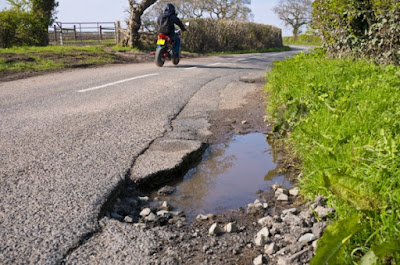 Just as alarmingly, recent research by the Asphalt Industry Alliance found that the average local authority highway maintenance funding is now 20 per cent less in real terms than in 2010, with one in five local roads now classed as structurally poor.

Dan Jones, operations manager at TrackDays.co.uk, said: “These are worrying findings for all motorists and motorcyclists in particular. Poor road surfaces, such as potholes, can present a real danger.

“While there has been a slight drop in recent years in these types of accidents, it is still not enough, especially when you consider that other independent research shows that the number of potholes being repaired in England and Wales has fallen.”

Meanwhile, further data analysed by TrackDays.co.uk from the DfT’s Reported Road Casualties Great Britain Annual Report 2019, discovered some of the other most common causes of accidents where the road environment was a factor to blame.

However, as autumn and winter arrives, traditionally the wettest months of the year, by far the biggest cause of accidents was slippery roads due to inclement weather, which was a contributory factor in more than 5,500 reported accidents.

Dan added: “Slippery roads cause on average more than 15 accidents a day, so we would urge all car drivers and motorcyclists to take extra care as we enter autumn and winter, normally the wettest months of the year.”

For more information about TrackDays.co.uk, whether it’s for an own vehicle track day on a motorbike or in a car, or for a driving experience in a supplied car, visit www.trackdays.co.uk.