Guernsey-based record-breaker Zef Eisenberg has died in an accident

Guernsey-based record-breaker Zef Eisenberg has died in an accident

at Elvington Airfield. He was 47 years old.

Over the course of his career, Eisenberg set more than 90 British, World, UKTA, ACU and Guinness Speed Records on two wheels and four. The most recent of those came at Elvington in late September, when he set four new FIA benchmarks on the EISENBERG V8 motorcycle. 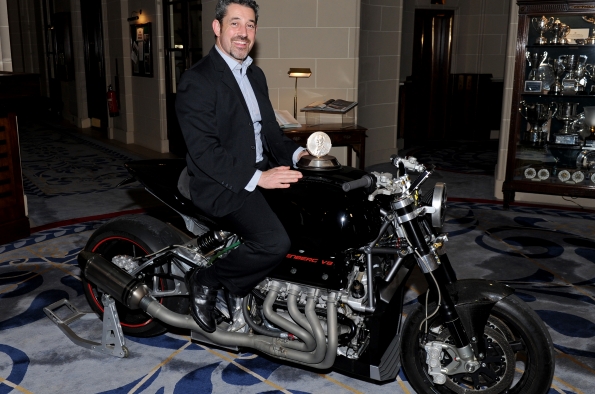 Eisenberg grew up in North London and attended UCS school in Hampstead. He was passionate about skateboarding from the age of 12, and would often skateboard all the way to school. Being very creative with wood, plastic and metal, he stayed behind every evening and worked in the technology department, and at the age of 15 he decided to install an electric motor in a bicycle. To his great delight it worked, and in recognition of his success he was given a grant for his innovation from a large electronics company.

At the age of 16, he decided to take up bodybuilding, and after a year of hard work and family encouragement he became junior bodybuilding champion of Great Britain. To keep in shape, he needed to take protein powder. At that time it was quite costly, so he decided to start a business making his own. He studied for a BSc in nutrition in his own time and developed a winning formula that was used by many bodybuilders, athletes and sportspeople throughout the UK. 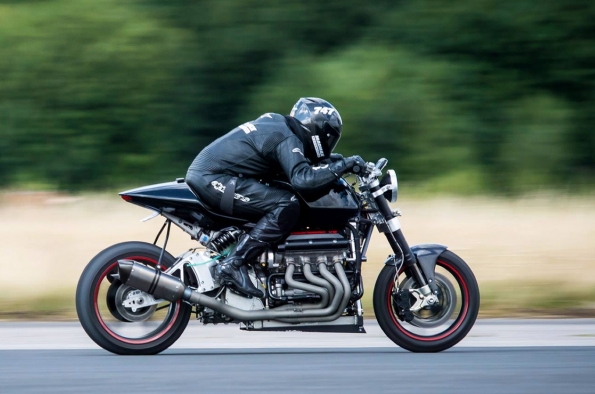 The birth of his business coincided with the early days of the internet, and he used online channels to grow it exponentially. Maximuscle soon became the leading product in the marketplace, and GlaxoSmithKline eventually became interested in adding it to its portfolio. Eisenberg sold up, made his home in Guernsey and embraced the island life.

He applied his analytical approach and determination to the science of his other great passion – motorsport. As he once said: “The human body and a vehicle engine have close similarities. Both require the best care, fuel and maintenance to perform at their best.”

He dedicated himself to demonstrating what could be achieved when pushing the boundaries of both human and machine in record-setting challenges. The self-confessed performance junkie learned his trade with V8 muscle cars and drag motorbikes, before creating the world’s most powerful turbine motorbike. Five years of intense work resulted in a number of accolades, including a new Guinness record for the fastest turbine bike in the world at 234.01mph.

In September 2016, he survived Britain’s fastest-ever motorcycle crash when the turbine bike

failed to stop at the end of the Elvington runway. He shattered his pelvis and broke his pubic bone, hip, femur and seven other bones, and spent three months in hospital – during which doctors told him that he’d never walk again. That was followed by three months in a wheelchair and six months learning to walk – and 12 months to the day after the accident, he was back at Elvington competing on the rebuilt bike.

Eisenberg’s infectious enthusiasm, and his unique ability to explain in layman’s terms the most complex subjects, led ITV to approach him for a new TV programme, aptly named Speed Freaks, focusing on the design, build and engineering of extreme cars. Those included a bespoke 1200bhp Porsche 911 Turbo in which Eisenberg recorded a speed of 223.4mph on the famous Pendine Sands in south Wales. He became the only person in history to hold both car and bike outright speed records at Pendine, and the only person to hold records at over 200mph on sand on both two wheels and four.

In early 2019, Eisenberg began development of the world’s fastest electric motorbike. His MADMAX race team worked in close collaboration with Nottingham University PhD students and created a bespoke machine from scratch. In September 2019, he rode it to three World FIM records and one ACU British record for the fastest unfaired electric motorbike in the world.

His passion for education led to Eisenberg taking the turbine motorcycle to schools and colleges, with the intention of inspiring youngsters to challenge conventional wisdom and motivate them to achieve anything they wanted with the right mind-set, attitude and belief. He also sponsored and promoted the ‘Emergency Hero of Guernsey’ award, which recognises the invaluable work of medics, helicopter crews, surgeons and intensive care staff, and was central to a charity project that created the largest children’s playground in the Channel Islands. In 2019, it won the Pride of Guernsey award for Parish Champion of the Year, and the same team subsequently restored the famous Japanese hut at the far end of Saumarez Park pond.

When he was approached by a group of skateboarders to raise money to build some skate ramps, Eisenberg recognised an opportunity to promote the positive benefits of teenagers engaging in the sport, and set about building a state-of-the-art concrete skatepark in a 15,000 square-foot location at Beau Sejour on Guernsey. Once it was finished, Eisenberg and his team continued to maintain the park, and this year he was seeking fresh funding in order to add new features.

He was also a keen supporter of other local sports, such as the Guernsey Badminton Association, and via his MADMAX team he backed motorsport talent such as hillclimb star Darren Warwick. In October 2019, the Royal Automobile Club awarded him the Simms Medal in recognition of his outstanding contribution to motoring innovation. The Medal is among the most prestigious honours bestowed to individuals or a small company. John Wood MBE, Chairman of the Simms Committee, Royal Automobile Club, said: ‘Zef Eisenberg is an individual driven to exploit technology to the ultimate.’

Known for the enthusiasm that he applied to each of his projects, Eisenberg injected his positivity into everyone he came into contact with. They, in turn, were left feeling upbeat and in an enlightened mood. He was a great mentor for many friends and business associates who admired him. His family have described him as a ‘true genius with unique talents’.

Eisenberg leaves behind a loving partner Mirella D’Antonio and two children. His parents and four siblings all adored him and followed his progress with great admiration. All have expressed their great sadness and ask for their privacy to be respected at this tragic time.