The crackle and bark of blown fuel drag racing ricochets once more around Santa Pod Raceway next weekend (11-13 September). Fans starved of nitro’s sensory spectator experience will have their patience rewarded as Top Fuel Dragsters and Funny Cars return to action for the first time in a year. The weekend was scheduled to host the European Finals, the biggest drag race on the calendar, when racers would pour in from across the continent to decide the season’s FIA/FIM European championships. Covid-19 put an end to that, forcing the cancellation of all national and international competitions and series.

In its place, Santa Pod unveils NOT The European Finals presented by STP, a socially-distanced version of the big race in miniature – yet not so miniature: the current entry list stands at a respectable 181 cars and motorcycles, with entrants from no fewer than six continental countries (down from the usual 16 or 17) praying that quarantine regulations will work in their favour.

Making the big noise at the head of the programme are a pair of nitro-burning Top Fuel Dragsters, three nitro Funny Cars and a trio of historic-style Nostalgia Funnies. It will be exactly a year since fuel cars last pounded the Santa Pod track. Starring in match-race action, the weekend’s Top Fuel stars are Susanne Callin, representing the UK, and Finland’s Antti Horto. Callin, who holds the unique distinction of world’s first 300mph teenager, returned to the track last year after a 14-year family-life break. Like her, Horto cut his racing teeth in the Junior Dragster class and makes his first Santa Pod appearance since finishing second in 2018’s European Top Fuel championship. 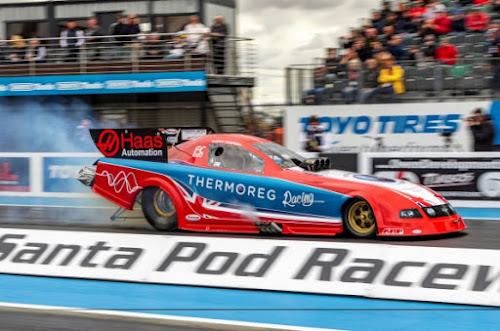 The supporting programme includes a full range of Sportsman classes on two and four wheels, including Top Fuel Bikes, plus exhibition Jet Cars, a Monster Truck and stunt driving and riding displays. For a few quiet – but no less quick – seconds, Denmark’s Hans-Henrick Thomsen will attempt a quarter-mile world record on an electric drag bike.

Santa Pod began hosting behind-closed-doors events in early July, and ventured into “covid-compliant venue” territory with paying spectators admitted from the end of that month, all under the strictest local authority scrutiny. Immense efforts have been made to ensure that social-distancing, hygiene and safety measures are maintained, with the local authority reviewing risk assessments in detail every week.

Accordingly, spectator numbers are limited and all tickets must be booked in advance, online at santapodtickets.com or by telephone at 01234 782828. There will be no ticket sales on the gate. As usual, under-16s are admitted free (up to three per paying adult) and socially-distanced overnight camping is also free.

NOT The European Finals takes place at Santa Pod Raceway, near Wellingborough (NN29 7XA) from Friday 11th to Sunday 13th September. Full event information is available online at santapod.co.uk/nottheeurofinals.php. Sunday’s fuel car runs will finish by 4pm, allowing families to head home in time for a school start next day.

Fingers in ears, please, and hold on to your hats. It’s getting fast, furious and loud again at Santa Pod.