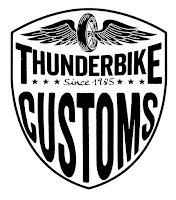 In Europe, the company will be represented by Thunderbike in Germany, believed to be Europe's largest authorized Harley-Davidson dealer by volume and one of the European V-twin industry's most prolific custom bike builders and parts and accessory designers.
Founded, owned and still operated by Andreas Bergerforth, a one-time AMD World Championship of Custom Bike Building winner (in 2012 with 'PainTTless', a thinking man's Ironhead Sportster), Thunderbike will have the monoshock Slamtail available from inventory for dealers throughout Europe.


In Japan, the Slamtail will be available from respected Osaka based custom motorcycle engineer and parts/accessory importer and distributor Trijya Custom Motorcycles.
We first saw Slamtail in AMD in 2015 with an all-new rear suspension lowering system for Twin Cam Softail Harley-Davidson motorcycles from 1999. As an alternative to the conventional "airbag" type kits in which 'Hydraulic Rams' are used, the Twin Cam Slamtail reused Harley's OEM spring and shock units, rather than scrapping them, therefore offering better value, with
the original ride quality retained and no change to damping and spring rates - the brainchild of ex-Formula 1 senior suspension design engineer Ken Rutherford (who numbers the Benetton F1 team among his impressive credentials).

Last year Ken stepped it up with a new design for the monoshock Softails - wide and standard frames. With the system fully raised, the ride quality and suspension travel is the same as the OEM original, and the system re-uses the OEM Showa shock unit, replacing the OEM coil spring with a bespoke high-stress steel tapered wire coil spring with a progressive rate.

The Slamtail-equipped bike can be ridden at any height whilst still retaining the stock ride comfort. The new system lowers the ride from stock height to an absolute minimum, with supplied polyurethane bump-stop installed. An additional 10 mm of preload adjustment is available for specific rider/pillion demands.

A new side stand mounting clevis is also included in the standard Slamtail kit, for use with any aftermarket lowered M-8 Softail (including all air systems). It replaces the OEM side stand clevis and allows the bike to be safely lowered without falling over. Optional kit extras include handlebar- mounted key fob bracket and dummy preload adjuster knob to replace the original preload adjuster knob, filling the hole left in the RHS side cover.
www.slamtail.com
www.thunderbike.de
www.trijya.com
Posted by Onno "Berserk" Wieringa www.madnessphotography.nl at 16:46