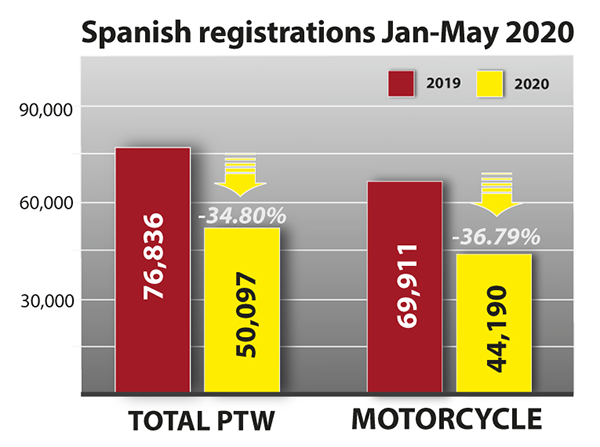 
With only 820 new mopeds reported as registered for May, statistically, the motorcycle figures alone were not much different to the total for all PTWs at -43.68% (10,152 units).
For the year to May, the motorcycle market in Spain is -36.79% (44,190 units sold), having been +13.39% (69,911 units sold) for the first five months of 2019.
Following his participation in a transport industry wide initiative in Spain that called for Government help for the sector, Jose Maria Riano, General Secretary of ANESDOR, stated that "the commitment by the Government to invest in the recovery of the Spanish automotive industry is very important for the sector."
The Spanish Government has confirmed that a system of grants (as opposed to loans) is being made available. Riano went on to say that "it is necessary that these grants are carried out efficiently. With regard to the two wheels sector specifically, this means that the measures should address the particular circumstances of the motorcycle market, which in many respects is quite different to that of passenger cars."

Speaking to the May numbers, Riano said: "The asymmetry of the de-regulation process, with the delay in opening some of the major national markets such as Madrid, Barcelona, Valencia and Malaga, has significantly slowed the process of recovery."
The top selling motorcycle above 125 cc in Spain is the Kawasaki Z900 (1,020 units YTD), and Honda remains market leader in all PTW terms, followed by Silence (whose S02 electric scooter is Spain's top selling model overall at 2,564 units YTD), Yamaha, Kymco and BMW