Postponed from May, the 34th annual Biker Fest
and Italian Bike Week will now be staged on the
weekend of September 17-20 at its spectacular regular
Lignano Sabbiadoro peninsula venue an hour
north of Venice on Italy's stunning Adriatic coast. 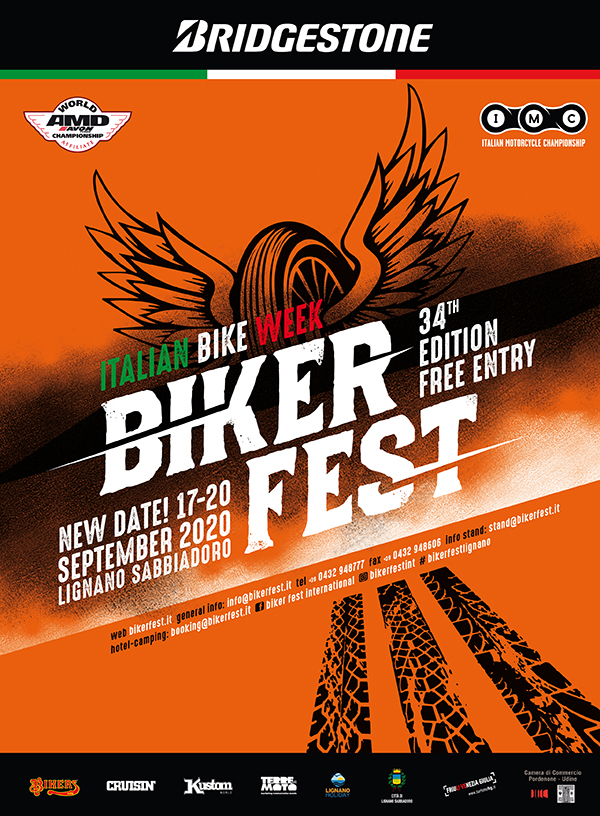 Sponsored by Bridgestone Tires, Biker Fest is a long standing AMD World Championship of Custom Bike Building Affiliate and regularly sends at least three superb Italian custom bikes to compete for top honors at the 'AMD'; the event will also again be hosting the final of the 14-round Italian Custom Bike Championship.

Last year saw thousands of bikers descend on Lignano Sabbiadoro for one of Europe’s oldest custom bike events, the brainchild of father and son team Moreno and Micke Persello, creators of the original Chopper and Custom Show at Padua back in the 1990s, and publishers of leading Italian custom lifestyle magazine Bikers Life.

This will be the seventh time the ever popular Biker Fest will play host to the climax of the Italian Bike Championship with no less than four builders winning 1,000 euro each of expenses to compete at the next 'AMD XIV'. Over 100 bikes in total were on display at the impressive Terrazza Mare last year, and classes will again include Freestyle, Modified Harley-Davidson, Metric, Streetfighter/Sportsbike, Cafe Racer, Scrambler, Bagger and Old Style, with the three ‘Best in Show’ winners and ‘Public Vote’ pick scooping the ‘AMD’ prize money being put up by the show organizers.


While it remains to be seen what impact the coronavirus pandemic has on an event that is being staged in northern Italy, an area that has been particularly hard hit, last year there was an expanded additional "customizer" vendor area opposite the Terrazza (in addition to the usual vendor lot at Luna Park), with some 35,000 riders attending the event weekend.
www.bikerfest.it
Posted by Onno "Berserk" Wieringa www.madnessphotography.nl at 10:00