Spain: April PTW registrations -93.47%
The latest new PTW registration numbers from ANESDOR, the motorcycle industry trade association in Spain, continue the predictably depressing impact seen in the second half of March as the market there remained under 'lockdown' for the whole of April.
Total new PTW registrations were down by -93.47% in Spain in April at 1,074 units, from 16,436 units in April 2019.
After a good start to the year, with January +13.45% and February +21.43% (with over 14,000 new PTWs sold in each of the first two months of the year), March was 43.66% down (9,128 units), giving us an insight into what two weeks of 'lockdown' meant. Now the April figures show us what a full month of lockdown means!
In 2019 Spain saw total PTW growth of +12.17% for the full year (194,663 units), but having lost two months of the "annual market action" it remains to be seen, as Spain emerges carefully from 'lockdown' in May and beyond, the extent to which lost sales will be picked up later in 2020 (if at all). 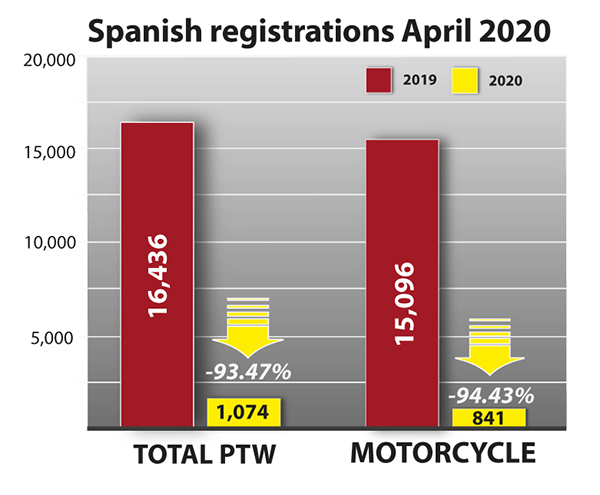 Statistically the figures are even worse in Spain when looking at motorcycles alone. The market there was -94.43% (841 units) in April, having been +19.28%/12,825 units in February, +11.96%/12,373 units in January and -46.64%/7,997 units in March.
For the year to date,  the motorcycle market in Spain is -34.40% (34,038 units sold), compared to 51,885 units sold in the first four months of 2019.
Moped registrations in Spain were -82.61% for April (233 units sold) and are just -5.92% YTD (5,089 units sold) following a strong start to the year.
In a transport industry-wide initiative, Jose Maria Riano, General Secretary of ANESDOR, has signed a request to the Spanish government for a "crash plan" that will contribute to "stimulating the market and allowing companies to sustain jobs".
"We need the Ministries of Industry, Ecological Transition and Transport to have the motorcycle in their plans to rebuild the automotive and mobility sector. Spain has 5.5 million registered mopeds and motorcycles, and so far this year 13% of all registered vehicles have been motorcycles and represented 12% of total vehicle registrations in Spain in 2019.

"Motorcycles and mopeds have a long social, industrial and sports tradition in Spain, and, driven by consumer choice, their presence on the streets of Spain has grown significantly in recent years. Their effectiveness and efficiency in today's mobility environment has allowed the motorcycle market to have almost doubled since 2013."
"In this framework, it is necessary for administrations to have the two-wheel sector in mind when developing their strategic plans for the future. Ministries and municipalities must not forget the motorcycle sector when planning for mobility - the future of companies and their workers is at stake."
Riano went on to remind us that "ANESDOR is keeping the communication channels open with the government of Spain and, through ACEM in Brussels, with the European Commission, with the objective of seeking coordinated social and economic solutions to the crisis."