It is about one hour of tram, railway and about ten minutes foot march from the Messe Zuerich in Oerlikon to one of the most scenic panorama views of the Swiss Alps: Looking down from the Uetliberg –just above the city and lake, once the „last stand“ in times of war – one can see the importance of Zuerich as Switzerlands main business city, as well as the crowded conditions inside the city limits and the surrounding countryside. 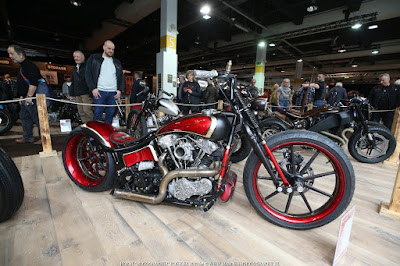 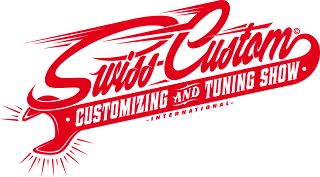 Zuerich remains THE secret capital of Switzerland and is still expanding into the countryside. But the newly built tower on top of the 869 meter high peak also gives a stunning view on the Alp mountain range that offers so many great riding opportunities for motorcyclists – at least when the weather allows. Swiss Moto/Swiss Custom in Zürich, for years the complete showcase on Switzerland’s enthusiastic motorcycle scene and the “gateway” to what is happening to the Swiss scene. As small as the country might be, there are major names in European Customizing at home in Switzerland – and that includes all cantons of the country! 2020, the annual HOG Rally will again hit Lugano –and the LOVE RIDE will hopefully recover from last years devastating „rain out“ – snow in may! Who needs that?  Switzerland has a lot to offer, but it certainly has its price... 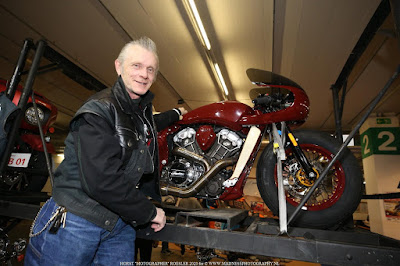 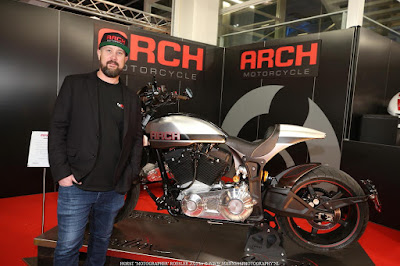 When it comes to travelling, Switzerland does not range among the „bargain“ countries to have a vacation. SFr. 5,-- for a bottle of plain water, 24,-- for the entrance fee – and don‘t ask for accomodation and getting a dinner after a hard and busy show day. Having travelled in and around Switzerlands motorcycle scene for 40 years, „Swiss Moto“ and „Swiss Custom“ have become „hit and run“ affairs that can be performed in a one day visit – including the long awaited tour to the Uetliberg Panorama Tower, which was on the authors „to do“ list for twenty years, since the first Swiss PERFORMANCE hit Dietikon in the year 2000. Swiss PERFORMANCE is now history, having been part of Swiss Moto for some time, but the spirit of customizing is still alive, despite rising challenges, of which costs for displaying at Zuerich Trade Fair have become a considerable portion. 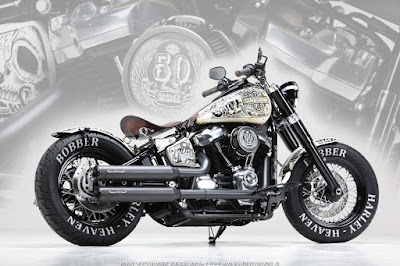 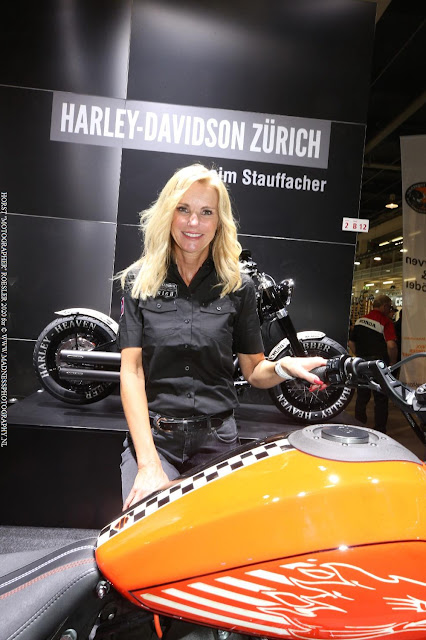 The “Swiss Custom” portion of the Swiss Moto event includes a scenic bike show, embedded into a “Western Town” setting that also features presentations and a stage program which is highlighted by performances of the “Fuel Girls” from England. This year, the event has shrunken back to just one hall – and even in this hall, some former display booth seemed to have been filled with bikeshow competitors. Not too surprising, as exhibitors like Dr. Jekill & Mr. Hyde and Kess, both manufacturers of adjustable (and LEGAL) exhaust systems, are greeted with a 3-floor high banner „Laut is out“. No need to translate... 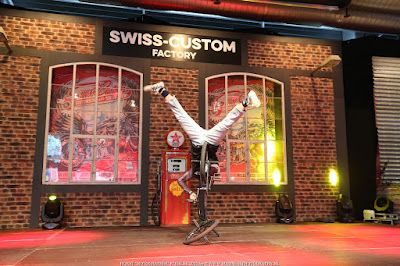 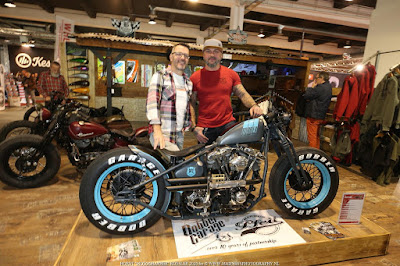 The eastern „Swiss Custom“ hall was occupied by the completely tarmac floor for the still legendary „European Indoor Stunt“ competition of years past – only that the back then superb championship was not to take place again – and only former competitor Humberto Ribeiro, without doubt one of the top motorcycle stunt artists in Europe, had to perform by himself for four show days and the new „Pre-Opening“ evening. Humberto gave it all, but remembering Motor Bike Expo‘s Stunt competition in January, motorcycle acrobatics have moved on too... 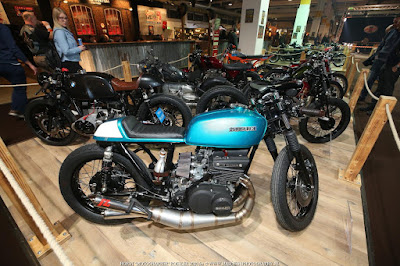 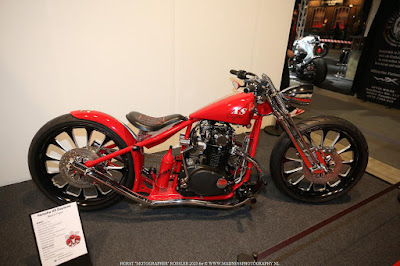 For several years, Ted Smith of the “Rats Hole Chopper Custom Show” hands out one of his trophies at Swiss Custom, bringing over some of the Rats Hole Judges and this year, the spectacular flame spitting V8 Trike of Paul Andreota, who built the “Alien Trike” all by himself and was choosen at Daytona Bike Week for the trip. He then had his 2000+ hp trike completely repainted and the flamethrower changed to allow it for indoor use. Handing out little Aliens and UFO stuff to the kids at each flame-spitting performance made him a crowd pleaser at the Swiss Custom hall, let alone the mighty roar out of eight blank pipes. No need to ask for Swiss homologation here... 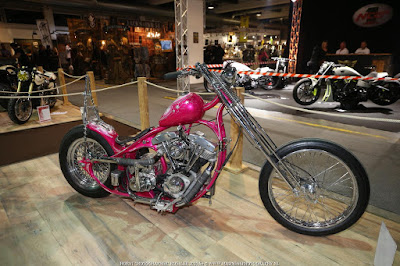 None of the distribution companies are left on Swiss Moto or Custom – the import and tax issues bringing any exhibition items or bikes into Switzerland, including possible traps by modified/added laws –are not worth the effort. Especially since the Messe Zuerich now controls if items/bikes have been imported and pre-taxed correctly. As a matter of fact, Rats Hole „Big Daddy“ Ted Smith had to sell „Swiss Custom shirts rather than bringing in his own popular „Rat‘s Hole“ T‘s. 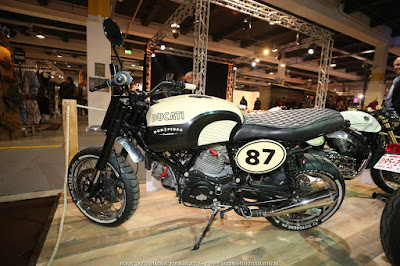 The two main awards – the Rat‘s Hole „Best of Show  and the trip to the Emirates Custom Show in Dubai thus remained in Swiss hands: CUSTOMBIKE Build-Off winner McSands took the „Rat“ and Bobber Garage‘s „Reini“ Servello the trip to compete at the middle east motor-mecca. It was up to the „Fuel Girls“ to bring some hot  action to the Swiss Custom stage – their fire show is the best in Europe and combines acrobatic skills with perfect choreography when spitting flames or waving the torches! 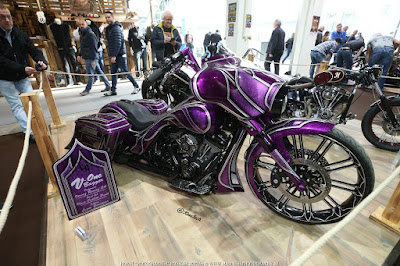 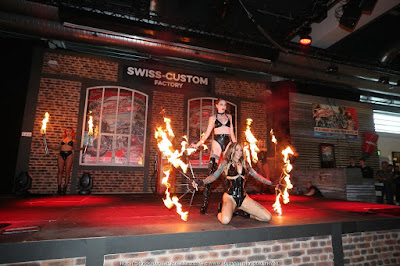 As Portuguese stunt pro Humberto Ribero had his own hall on the top floor, Swiss Custom was compressed to just one hall, but the visitors interest was still high. Traditionally, Harley-Davidson and Indian battle it out on the lower floors, with Baechli Harley-Heaven, Buendnerbike and Bixe being present as national Dealers on their own displays with brandnew custombikes. Without a national „Custom Kings“ contest running, Buendnerbike displayed a „history“ of BB-built custombikes in a tunnel-like arrangement, while Bixe and Harley-Heaven remained in the open, the latter sharing the booth between Harley-Heaven and Harley-Davidson Zuerich, now operated by Denise Baechli. During the opening day, Wednesday evening, Harley presented the new CVO Touring models as well as the EICMA-premiered design studies of „Pan American“ and „Bronx“. From Harley‘s booth, a quick „walkaround“ into the halls did show the „Pan America“ competitors, of which there are plenty! 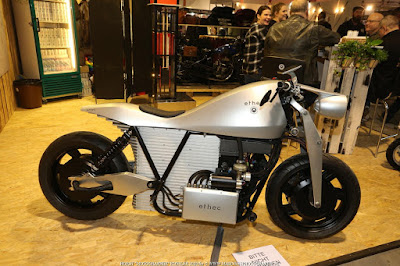 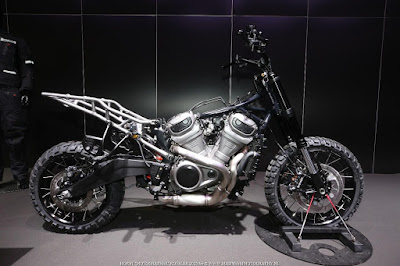 BMW, Honda, Yamaha, Suzuki, Kawasaki, MV-Agusta, Ducati, Moto Guzzi and Triumph all have long-time Off-Road Tourers with race heritage, in case of BMW, the brand itself not present at the show, a 40 years advance! Good luck to beat that! Swiss top customizer Danny Schneider took a seat on the „Live Wire“ and who knows – maybe his next custom project will electrify his „Hard Nine Chopper“ fans. As a shocking news came the resignation of only recently promoted Dr. Christian Arnezeder, who stepped down from his September 2019 assigned post as General Manger Central Europe. Christian Ulmann was collecting Farewell-Greetings from the Swiss Authorized Dealers on a orange jerry can during the show hours...


Indian had not just the complete „stock“ model line present, Patrick Meyer of PM Performance and others presented new – and sometimes extreme – custombike projects, introducing a supercharged „111“ V-Twin recycled from a accident „parts spender“ that is looking for a new life! Mark Wilsmore of Ace Café London heritage enjoyed a visit to Switzerland, as the very active Ace Café Luzern was exhibiting at the Indian booth. Mark is exited that his Swiss-based location, just beside the motorway from Zuerich to Luzern, is creating as many events as the London original and buzzing with themed motorcycle and car dates!
The halls of Swiss Moto were wandered quickly: Many manufacturers ssem to have cut down the size of theit booth space – and many Italian brands were missing. Clubs and motorcycle organisation seemed to be fewer than in previous years, but the event nevertheless is an opportunity to meet a lot of the „main players“ in Switzerland.


With this years HOG Rally in Lugano running again, it will be a great chance to ride the Swiss mountain roads again. Lugano also has the benefit of being close to the Italian border and thus cheaper accomodation. The Dead Riders Sumiswald will also be held July 22nd to 26th –and this is certainly a place to be in 2020, as the event is with free entrance – something that is rarely seen in Switzerland these days... 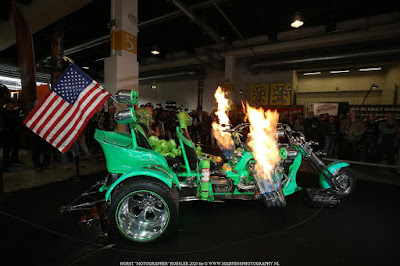 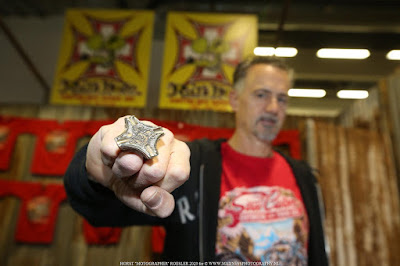 ALL IMAGES: As every year, Harley-Heaven and Harley-Davidson Zuerich have introduced several new custom bikes, based on current and past Harley models. „Motographer“ Horst Roesler had them photographed in the Harley-Heaven Showroom and on his Studio at Motor Bike Expo.


See for all the photo's Swiss Moto 2020
www.madnessphototgraphy.nl - photo galleries - 2020

SWISS MOTO/CUSTOM might have been the last big event held in Switzerland for some time.

Following a one year absence from Swiss Moto/Swiss Custom, Motographer Horst Roesler returns to the Swiss Motorcycle Showcase and the two Swiss „Main Players“ Bächli Harley-Heaven and Harley-Davidson Zürich, again introducing about a dozen new custom-made bikes for their clients.

Rumour has it, that the obvious „exodus“ from Swiss Moto/Swiss Custom is due to the ever raising costs, not just to exhibit at Zuerich Messe, arguably a expensive location to book. With extended exhibition time, in particular a limited access „Pre-Opening“ on Wednesday night, the fair tried to get additional attention, but also pressured the exhibitors in having their displays and staff available early.

Switzerlands motorcyclists enjoy some of the nicest roads you can ride in Europe, but were and are under pressure by strictly enforced rules and regulations that make riding in Switzerland anything but fun. Which backfires now to the sales  of motorcycles and scooters which otherwise would be a certain alternative for the notoriously jammed traffic conditions in some Swiss towns.

I state it here, but I hope I am wrong: The 17th Edition of Swiss Moto could have been the last, at least in this format and at this location...