Having reduced its once controlling interest to a 33.5% stake some years ago, Honda has announced that it is to buy up all outstanding shares in Showa and two other well-known Japanese motorcycle component industry majors in which it also has significant stakes - Keihin and Nissin - in a massive deal with automotive supply giant Hitachi Automotive Systems (HAS) to create a new combined business that will swallow up all three of the component makers. 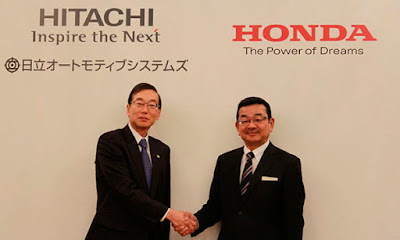 The new business will be jointly owned by Hitachi, who will own 66.6% of the shares in the combined business, with Honda owning the remaining one third. Honda currently owns 33.5% of Showa, having once held a controlling interest, 34.86% of Nissin and 41.35% of Keihin. It is reported that the combined business will have around 1.8 trillion yen in sales ($16.5 billion).

The deal will bring together, into one integrated business, three areas of component manufacturing - suspensions, fuel management and brakes - that are increasingly interdependent; a trend that can only increase in the future as automotive and motorcycle systems themselves become ever more integrated and economies of scale become ever more important.

The merged company will focus on developing components for EV and self-driving systems, along with new on-demand mobility services, combining their scale in a bid to come up with products more quickly and efficiently.
Hitachi said that the increasing complexity of vehicle technologies required bigger R&D capabilities and a bigger global footprint and access to a bigger pool of talent. "The merged company will be a mega supplier and will deliver competitive advanced technologies and solutions," Hitachi Executive Vice President Keiji Kojima told reporters. "We will leverage our strengths and our scale to expand globally."

The new business will be known as Hitachi Automotive Systems in what is being termed an "absorption-type merger," with the Showa, Keihin and Nissin names likely to disappear altogether in time. Showa's OEM client roster currently includes Harley-Davidson, Kawasaki and Suzuki, with Nissin supplying those and Yamaha. It's not known how this merger will affect current OEM customers of the trio.
Honda has said that "this merger will enable combination of the respective advanced technologies of Keihin's powertrain business, Showa's suspension and steering business, and Nissin's brake system business with the strength of HAS."

Keihin needs little introduction as a once dominant and still legendary name in carburetors, and though best known in 'metric' markets, Nissin is believed to have equipped more motorcycles with brake calipers than any other manufacturer.

Showa has a storied history in the motorcycle industry, not least with its historic connections to Harley-Davidson. These days Showa is known as a purveyor of suspension products to Harley, but its links with Milwaukee go back to the 1950s, and using 'Honda' front ends (i.e. Showa front ends) was a significant pawn in Harley's 1985 near death experience. Founded in 1938 as a manufacturer of aircraft suspensions for the pre-war Japanese military, in 1950 Showa acquired Rikuo Motorcycle, which made licenced versions of Harley-Davidsons in the 1930s and 1940s. The Rikuo brand lasted until 1962.

When Harley was in deep trouble in 1985, Showa front ends became a bargaining chip in Vaughn Beals' and the United States Trade Representative's financial and tariff dealings with Honda (and Yamaha).