At the time of press it is still difficult to discern just how much of the global response to the new Coronavirus pandemic and the COVID-19 disease it can spawn in vulnerable victims is hype and how much is realistic - but by any measure, it's not looking trivial.
Even if the virus itself turns out to be less pernicious than feared, the impacts of the panic it is creating are locked-in and will color and shape the global motorcycle industry business ecosystem for months or maybe years to come - regardless of whether it turns out to just be a short, sharp shock or to be the trigger for a long-term economic downturn. 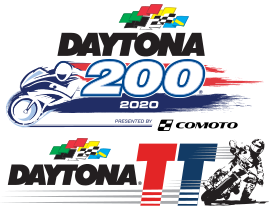 At this point in the news cycle, the latest news was of the AMA's decision (just 24 hours out from race day) to postpone the much-anticipated Daytona 200 and AFT TT double header slated for 14 March. The Daytona 200 will instead be staged during Biketoberfest, with the Daytona TT delayed to an as yet unspecified date.
It is highly likely that there will be further AFT casualties, with the Atlanta ST (March 28) and Charlotte HM (April 04) looking particularly vulnerable.
The impact has already been felt on national and international race series around the world, with the Qatar (second) round of the World Superbike series postponed (currently the next planned round is in the Netherlands on April 19) and the first three rounds of MotoGP canceled or postponed (Qatar, Thailand and Austin, Texas) - the series is presently scheduled to get underway in Argentina on April 19.

Neither has the motorcycle show calendar been immune. Expos in Japan, Taiwan and Indonesia have already been either canceled for 2020 or (tentatively) re-arranged for later in the year. In Europe, while we here at AMD have been lucky so far with the first two of our 2020 World Championship Affiliate events being staged in the Czech Republic and Spain just before those countries effectively went into lock-down, industry events such as the Madrid International Motorcycle Fair (Vive la Moto, Madrid, Spain) and Roma MotoDays (Rome, Italy, in April) are either canceled or postponed.

In the United States, Mama Tried and Flat Out Friday (Milwaukee, March) and Revival Cycles' Handbuilt Motorcycle Show at Austin, Texas, planned for the MotoGP weekend are both postponed.
The market's major distributors (Drag Specialties, Tucker V-Twin and HardDrive/WPS) got their shows away just in time in January and February, as did popular shows such as Motor Bike Expo (Verona, Italy), The One Show (Portland, Oregon), Swiss Moto/Custom (Zurich), Motorraeder Dortmund (Germany) and the Progressive International Motorcycle Shows series with its J&P sponsored Ultimate Builder shows in January and February.