Following news last month about the growth of the AMD World Championship of Custom Bike Building's Official Affiliate event program, as we enter 2020, the year of the 14th World Championship ('AMD' XIV), there is news of further growth in the number of pre-entries for the October 2020 Championship.

At the time of writing there are still nine months to go before entries for the 'AMD' close, and there are already up to 60 'Builders' and over 72 bikes from over 20 countries (including four builders and their bikes from the USA) slated to compete in the five classes at INTERMOT Customized, Cologne, Germany, (October 6 to 11).
This is well above the comparable stage for any prior year, with 53 confirmed entries and another 19 Affiliate event winners receiving automatic entry - either for their Affiliate event winning bike or a new build – 2020 looks set to be another banner year. Plus, if 2018 is anything to go by, more than half the bikes this year will have been built specifically to make their global debut at the 'AMD'. 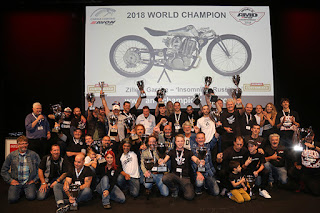 This year will see the first significant refinements to the World Championship class structure for a decade. The primary class from which the competitors (and selected prior competitors and VIP judges) will choose their 2020 World Champion will again be the Avon Tyres Freestyle class, and Avon are again offering free tires to builders for competing bikes.
The Modified Harley-Davidson class has been renamed Modified American V-twin class to allow Indian models that meet the criteria to compete head-to-head with Harleys for the first time.
The start-point must be a 1984 or later Harley-Davidson, or 'Gilroy', 'Kings Mountain' or later/current Indian engine and frame as the basis. The stock frame geometry must be maintained; the only modifications allowed are smoothing of welds and other moldings, sheet metal additions, tab and/or bracket relocation or removal and arising smoothings/ moldings (such as exhaust bracket relocation for example).
Swingarm/rear end changes, of any kind, including replacement swingarms, are permitted; fat or skinny rear end conversions are permitted; as is frame or rear end lowering or raising, provided the basic stock frame geometry is unchanged. Case internals can be replaced, along with cylinders, heads and internals. Turbochargers, superchargers, NOS kits etc. are permitted. Screamin' Eagle/JIMS and Gilroy Indian era S&S engine cases are permitted. Frames/cases can be from two different models (from the same manufacturer).
The Retro/Modified class is for any modified motorcycle with any drivetrain on any chassis configuration that is based on a pre-1984 engine, styled to have the appearance of a motorcycle manufactured prior to 1984. Use of some contemporary parts/design elements is permitted. 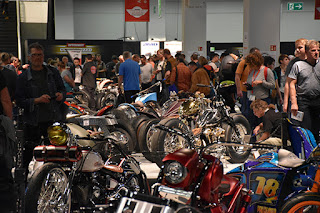 Entirely new for 2020, the Modified Street Custom class is for all manufacturers/brands with a 1984 or later major OEM volume production engine and frame as the start-point. The neck may be cut to rake or stretch the frame, and hard tail sections and wide tire alterations are acceptable, but the bike must be a two- or three-wheel motorcycle configuration.
Previously two separate classes, Café and Street Performance have been combined as a class designed to showcase customs where the primary intention of the customizer is to improve the street use performance of a motorcycle, and showcase the customizer's streetable performance engineering, tuning and handling skills and techniques. This class is open to all or any kind of motorcycles, of any platform or drivetrain, air-cooled or liquid-cooled (or even alternative energy) - 'metric', Whitworth/AF and SAE measure motorcycles, all kinds of performance engineering and enhancement/tuning techniques, including supercharging, turbocharging, NOS, fuel injection etc., with vintage or modern café racer, drag or sport bike styles among those permitted.
Also new for 2020 are a series of 'Cross Class' Awards - including the Detlev Louis sponsored Public Choice (as selected by public ballot) and New Energy Vehicles (NEV) - to be chosen from entries utilizing electric, hybrid, hydrogen or fuel cell power, or any other energy sources considered to qualify.
INTERMOT Customized fills Hall 10, one of the largest at the Cologne Exhibition Center complex, and one of the six halls in use for INTERMOT this year, with the 'AMD World Championship' as the center piece. Set-up day is Monday October 5th; Press Day is Tuesday 6th; Trade and Preview Day is Wednesday 7th; Public days are 8th - 11th October, with the live streamed awards ceremony at 3:00 pm on Sunday 11th.