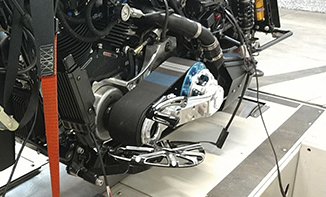 A few months ago we reported on Bandit applications for M-8 models, and now we have news of a drive specifically for Outlaw Bagger racers - a lightweight drive that saves up to 10 lbs over previous models, equipped with outboard bearing supports front and rear, and with access for a remote starter if desired.

Two models are offered - one for 2000 to 2006, and one for 2007 to 2017. Both are available with spring only clutches, or with single stage, multiple stage, or MTC Gen II engine driven lock-ups.
The same lightweight version is also available for Dyna and Softail chassis.
Developed with a "whatever it takes" philosophy to make it the finest and best performing product of its type and originally developed in 1987 for racing to suit the needs of the fastest H-D gas class racers and used to set records and win races in all major sanctioning bodies since then, Bandit has been updating its designs, engineering and manufacturing capabilities and features ever since.
Street versions for more conservative motorcycles are available - still made with the same attention to detail and use of premium materials. 9, 10 and 11 plate friction plate packs are offered to suit the application and to hold major power with a light lever pull.
Drives are built with or without outboard bearing supports in 2", 2.5", 3", 3.35" and 4" belt widths, and for transmission offsets without the need for spacers - several standard transmission offsets are available off the shelf and special order offsets are available in any dimension up to 2".
They are offered in left side or right side rear wheel drive models to suit the transmission used, in custom configurations for custom bikes and specials for race bike builders, with motorplate models for all 1990 to current Big Twins - indeed drives and clutches are available for all Big Twins from 1941 to present.
Best known for the Drag Race bred Superclutch, the 'Sportsman' street application is now available in three Big Twin application models for '90 -'97, '98 -'06 and for 2007-up, which now includes M-8 Softail and Touring applications.
Pictured here on a 2017 Road King without a lock-up unit, it is available with or without lock-up, and "the Sportsman clutch will handle a great deal of power without a centrifugal lock-up," says John Magee.
"The new Sportsman Superclutch is an economical, easy to install, high performance clutch upgrade with all of the quality, design, performance and service racers, performance engineers and dealers have come to expect from Bandit Machine Works."
Features include increased friction surface area of +217% of stock for 1990 to 1997 Evo models; +229% of stock for 1998 - 2006 Big Twins and 11 friction plates to produce a thumping +280% increase over stock for 2007 and up models. "That's more than any other high-performance H-D clutch," says John, "and delivers greatly increased torque and horsepower capacity - right through to the rear wheel.


"Our Sportsman Superclutch design means lighter lever pull for greatly improved 'feel' and ease of operation, with coil springs allowing infinite pressure adjustment to tailor the clutch to your bike - there's no more choosing between 'too much'
or 'not enough' - with the Sportsman Superclutch you can get it just right."
Bandit Machine Works uses Energy One friction materials exclusively.
BANDIT MACHINE WORKS
www.banditmachineworks.com