The recent instability on Wall Street hasn’t helped Harley-Davidson’s cause. The volatility seen in its share price since the start of October has seen the company looking at starting 2019 with its share price in the mid to upper $30.00 range from a 2018 high of $56.50.

This represents a loss in its Market Value of around -17 percent in less than three months and nearly 40 percent in less than a year (the 2018 high was $56.50 in January). A year that has seen Harley-Davidson break cover on the most detailed and ambitious long-term strategic plan any motorcycle manufacturer has ever disclosed to its investors. A year in which Harley 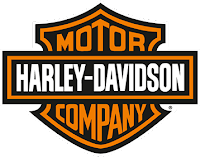 continues to maintain shareholder dividend growth and a dividend rate that has seen it comfortably outperform the S&P 500 investor return average for several consecutive years.
At the time of writing, the Harley share price had plummeted as low as to $34.79, a seven year low. By mid-December 2018 Harley’s Market Capitalization (“Market Cap” – the real measure of the value of a publicly traded business) had been dragged down to a low of $5.69bn, a drop of over $4.6bn (nearly -45 percent) since its March 2017 two-year high of 10.32bn; it has more than halved with a loss of nearly -60 percent (-$8.31bn) since its April 2014 five-year high of over $14bn. 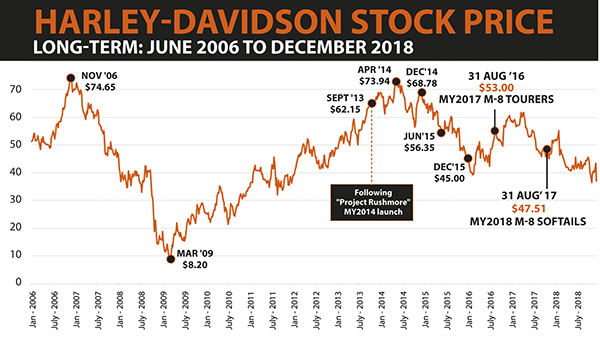 Harley’s share price has only once threatened to get back to the levels seen before the financial crisis. Since 2014, investor sentiment has been mostly negative despite healthy dividends.

Its all-time Market Cap high came in November 2006, before the financial crisis started to erode all stock price values, at $15.34bn, when its share price was trading at close to $74.00; the highest its share price has been since then was around $70.70 in May 2014.


Harley’s share price dropped to below $8.50 in March 2009, the recessionary low-point for most of the shares of the then listed corporations who are currently still in the S&P 500; at that time Harley’s Market Cap dipped as low as $1.62bn.

There is no question that the volatility seen on Wall Street since the start of October, as markets appear to lurch unsteadily between Bear and Bull, has been a major factor in the instability of Harley-Davidson’s own market fortunes. But it is far from being the only factor.
Harley-Davidson has been more exposed than many to the wider economic and geo-political concerns that are also creating an environment of unease and uncertainty – tariffs especially.
In the course of 2018 successive short-term Harley share price rallies have proven to be just exactly that, short-term. Quarterly shipment/retail numbers have overshadowed the EPS news, and the ‘More Roads’ strategic plan, and then later in the year, the MY2019 announcement also failed to move Harley’s needle in any meaningful sense.

Many analysts are now pointing to the late January 2019 full year fiscals announcement for 2018 as being a potential watershed moment for the stock market’s patience.
As regularly repeated, mantra-like, by both CEO Matt Levatich and CFO John Olin, one of the key pillars of Harley’s strategic planning is to keep its current “investment and return profile and capital allocation strategy intact through 2022” - when the new models forecast in its ‘More Roads’ strategy document should start to boost revenue and eventually profits, rather than drain capital.
Harley remains adamant that its ‘More Roads’ initiatives will be self-funded by continuing to “drive revenue growth” in the meantime and simultaneously “expand operating margins”. 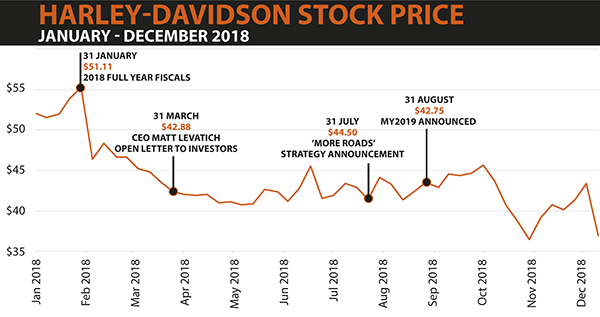 2018 has been brutal - even “More Roads” has failed to impress investors.
Harley’s third quarter EPS (Earnings Per Share – total dividends arising from net income expressed as a factor of the number of outstanding shares) shows that the company remains profitable and, arguably, theoretically, increasingly so. The $0.68 EPS was a massive 70 percent up on the third quarter of 2017, with Q3 revenue having been driven up by increased shipments - which Harley claims to have done while still managing inventory carefully - compared to Q3 there were 2,200 fewer unsold bikes in showrooms as the quarter closed.

While international sales are up (in most markets, but especially in Europe in volume terms), the fact that CFO John Olin was able to point to the  Q3 results being “in line with our plans” doesn’t bode well. There will come a point where investors may run out of patience, especially if portfolio returns are being squeezed elsewhere if the 9-year Bull Run has now ended.

According to analyst blogs, there is widespread concern that, with its focus being on units, investor sentiment could turn and that Harley’s focus on being in the top quartile of S&P 500 shareholder returns may prove insufficient to keep the share price where Harley needs it to be. The sharks could be about to start swimming in ever decreasing circles.