Custom Chrome Europe rolls out the latest "Bolt On" custom highlighting several new Milwaukee Eight Softail relevant products! Following a completely new line-up of 4 top „BOLT ON AND RIDE“ motorcycles that range from Sportster to Bagger and will not just cover most current Harley-Davidson model lines, but also a new Milwaukee Eight Tourer and CCE's first 2018 model year Softail, this "latecomer" features the latest new parts of Thunderbike, EMD, TXT and more manufacturers which now have been adapted for the new "Milwaukee Eight" powered motorcycles, just introduced in September 2017. 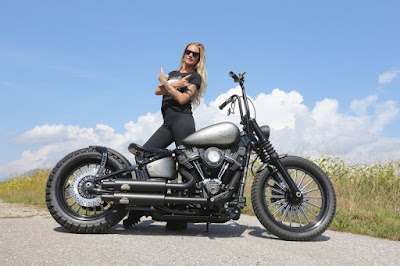 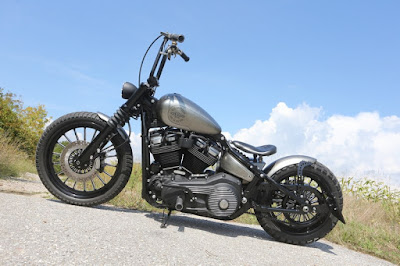 Thunderbike in Hamminkeln/Germany took the lead for the fifth bike of the 2018 "Bolt On and Ride" season and created a stunning cross-over custom, based on the new FXBB "Street Bob" rolling chassis, lowered and modified by the German top-shop and parts manufacturer who is distributing his parts through Custom Chrome Europe. 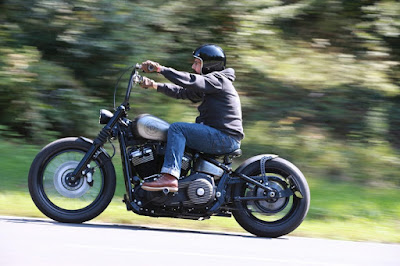 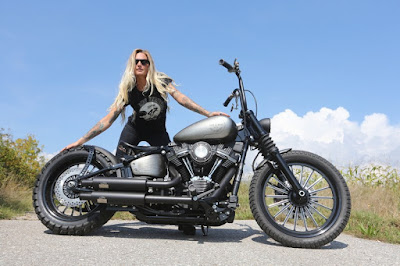 The "inofficial unveiling" took place at the Arneitz Custom Show on Monday, September 4th with Andreas Bergerforth of Thunderbike delivering the bike personally to the CCE booth, where the bike was shown to the public.

As the other 2018 „Bolt On and Ride“ motorcycles, the "Cross Bob" will be ridden by CCE staff, custombike specialists and you, the press – check in with Custom Chrome Europe Marketing for your own “Testride” feature of the 2018 “Bolt On and Ride” Motorcycles – or meet the members of the CCE Staff “on the road” when the bikes are ridden “unrivalled” to events all over Europe! See you on the road! 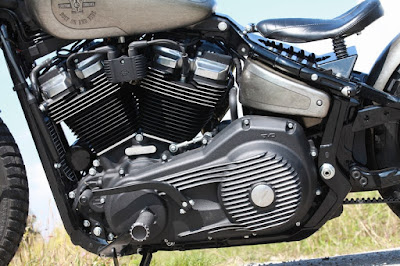 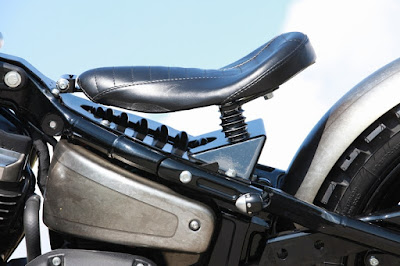 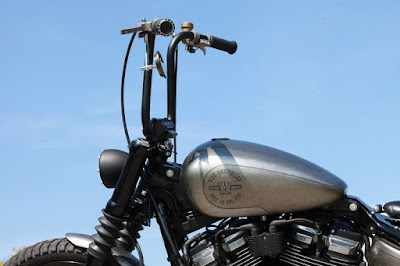 Time does not stand still, as much as we all want it – and retain some of the old values, some old, well etsablished habits – and those custom styles that we have come to enjoy through the last 6+ decades of customizing Harley-Davidson motorcycles. While Harley-Davidson as a manufacturer is venturing off in multiple directions to motivate and create new customers to ride their bikes, a surprising number of newcomers to the scene still cherish the "old ways" of riding and customizing, be it through riding and preserving a real antique motorcycle or by adapting old and popular styles to the new Harley-Davidson generation of motorcycles, currently undergoing a more radical change than ever before in the history of the Milwaukee-based manufacturer. As one of the top names in German customizing when it comes to all types of custom Harleys from mild to wild, Thunderbike again came up with an outstanding retro-look face-change for one of Harley-Davidson's most popular and undisputedly most successful models: The "Street Bob". Here's the story how they did it. 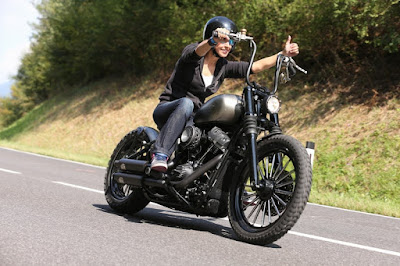 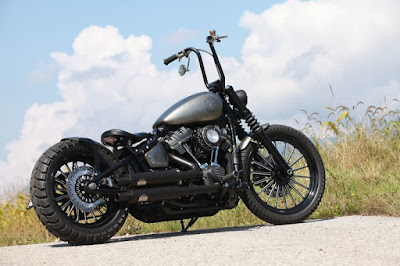 To premiere a new "Bolt On and Ride" bike at the end of the riding season might be somewhat counter productive when it comes to the term "ride": But it certainly IS the perfect date for the up-coming customizing time and to present the latest parts developed during the "riding season". Especially since the impressive premiere bike "Cross Bob" is coming from renowned customparts manufacturer and long-time CCE partner Thunderbike from Hamminkeln/Germany. The "Cross Bob" arrived in time for the "hot phase" of European Bike Week at the Arneitz Custom Show on Monday, September 3rd and was on display for the full week, if not used for filming, bike-presentations at the Arneitz Show Mile or riding – for which the stylish 2018 model year Street Bob "Bobber" was built in the first place! And riding it did! Not just for this photoshoot, but also for video- and news-clips set on the scenic roads around southern Carinthia and its neighbouring countries. 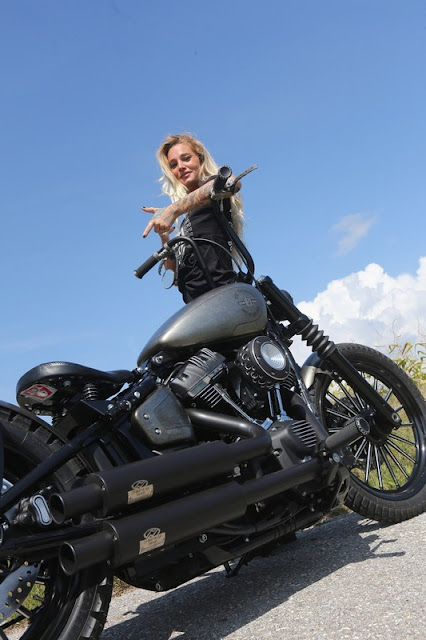 What Harley-Davidson is continuing into the 2019 model year has its roots in the development of the 2017 introduced new "Softail" models: While everybody was expecting the "Twin Cam" motor to be replaced in the 2018 model year, few expected a completely new motorcycle from front to rear. With the new frame and the "sudden death" of the Dyna-type motorcycle line, Harley-Davidson surprised again – and not everybody applauded to the bold move. The sudden merge of the Dyna and Softail frame into one rolling chassis, albeit continuation of the long-established model names, is sure challenging for future historians and Harley-riders, nevertheless conclusive: Never change a successful name! So, the product designator "Street Bob" lives on in an all-new rolling chassis which has very little overlapping components to its successful 2006-2017 Twin Cam powered ancestor, but Harley tried to preserve the essentials: The style and the spirit! The "old" Street Bob's idea was that of a cheap, no-compromises riding machine for those Harley-riders that want to burn up some roads, ride the hell out of the bike and get a lot of Harley out of a minimum price for the base packet. Yep, many "Street Bob" owners upgraded their bikes in later years – and some modified them to extreme, but the "riding spirit" always prevailed. A theme that is likely to be continued into the new Milwaukee Eight powered "Street Bob", albeit it is now less important which basic Harley-Davidson "Softail" you choose as a base for your project. Pretty much, only the number of parts that are un-mounted and stored or scrapped differ. And the fewest parts to dispose may still be on the "Street Bob", slightly re-christened as FXBB. The Thunderbike project came up with some pretty cool solutions for creating a "New School" runner out the stock "Street Bob". 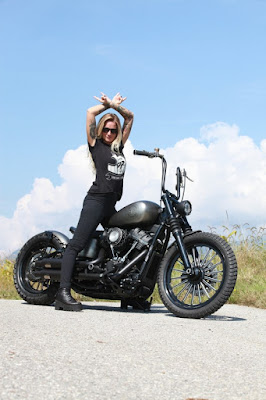 "We did it again", smiles one grinning Werner Mueller of Mueller Motorcycles at the 2017 edition of CUSTOMBIKE in Bad Salzuflen: "Everybody said that the new 2018 Softail models can not be lowered, as we did with the Evolution and Twin Cam models, but we have a solution!" Well, knowing Werner Mueller for 25 years of his career, he was never somebody making false promises – and his ideas often "inspired" Harley-Davidson itself (to put it mildly ...) to improve their products in recent years. Of course, due to the technological change from the two Softail-style shocks under the engine to the single shock of the 2018-up Softails, Mueller Motorcycles solution is more extensive than the previous adapters, but it also takes off up to 35 mm (40 mm for show!) at FXBB and FXBR models. Thunderbike followed up quickly with a fork lowering kit for all Milwaukee Eight Softails, this lowers the seating position even further. The stock Harley wheels where exchanged for RevTech's "Nitro Black" wheels in “Midnight” contrast design, of course with a full compliment of fitting brake rotors and drive pulley to complete the packet. The "Old School" look is further highlighted by the choice of multi-terrain profiled Heidenau K60 Scout tires.
The "bodywork" was altered with heavy metal TXT tailend and front fender, already available for the M8.

The FXBB "Cross Bob" marks the second 2018 model year "Softail" in the 2018 "BOAR" line-up – and the first whose ancestry derives from a former "Dyna" model, the FXDB "Street Bob". A true premiere for CCE's 10th anniversary "Bolt On and Ride" history and a true showcase and proof that – despite the complete new rolling chassis and engine by Harley-Davidson – old styles can be sustained, kept alive and even somewhat re-freshed with modern manufacturing technology produced parts.

"The future of M8 customizing has just started", noted CCE Managing Director Andreas Scholz during the presentation of the new bike on Saturday, September 8th, when Andreas Bergerforth of Thunderbike handed over the keys to Scholz, just before the start of the Custom Chrome International Bike Show Series Ride-In Bike Show trophy ceremony in Faak. And there is no doubt that Custom Chrome Europe is prepared for this future. But first let's "bob around" a little bit on this beautiful ride, the days are getting somewhat shorter …