With 17 weeks to go (at press time) until entries close for the AMD World Championship of Custom Bike Building (Cologne, Germany, October 3-7), the response to what will be the 13th ‘AMD’ has been universally positive. Entries are running way ahead at this stage in the planning cycle compared to prior years – either in Europe or in the USA – with over 80 bikes slated to compete already. 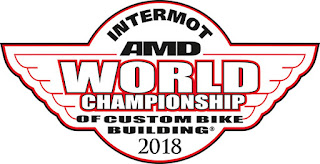 There is always ‘churn’, but the field is comfortably some 20 or 30 bikes ahead of the kind of pre-entry levels that would normally be expected at this stage and normally yields an eventual showing of some 70 to 75 or so bikes.

The primary reason appears to be the ongoing change and decline being seen in several of Europe’s historically strong custom shows and the increasingly widespread acceptance that INTERMOT ‘Customized’, where the AMD World Championship will be staged again (Hall 10 at INTERMOT/Cologne Exhibition Center, October), is now firmly established as the primary international custom motorcycle industry Expo in the world.

This year sees the Hall 10 footprint expanded as INTERMOT ‘Customized’ expands to occupy the whole of the lower level of what is the largest hall at the Cologne Expo Center, the only one of the original double-deck halls left, resulting in a satisfyingly retro and chic environment that works well for the custom motorcycle industry’s exhibition values.
the world’s largest custom industry expo

Hall 10 is located adjacent to the three primary public entrances to the Cologne Expo Center and in 2016 attracted some 150,000 visitors - this year the public days are expanded to five from four days.

With more than five prior World Champions already confirmed among the 2018 competitor community and bikes already slated to compete from some 26 countries worldwide, the Hall 10 attendance looks set to be another all-time record for a custom bike show at an international motorcycle industry expo.

In the interests of promoting craftsmanship and innovation, the AMD World Championship only features five classes, the most famous of which is the now almost universal Freestyle class concept first introduced to the motorcycle industry by AMD in 2004 - this is the class from which the competitors choose who will represent them as World Champion for the next 24 months. The other classes recognize the impacts that custom builders’ platform and design and engineering decisions have on custom outcomes to include the prestigious, immensely popular and highly influential Retro Mod class; Modified Harley-Davidson; Street Performance for cutting-edge high-performance engine and chassis work and a platform-diverse Cafe Racer showcase.

Most of Europe’s major V-twin industry parts and accessory distributors are already confirmed – Motorcycle Storehouse, Custom Chrome Europe and Zodiac International among them – with several of the major OEs again taking additional booths to showcase their customization programs.