ACE CAFE CELEBRATES ITS 80TH BIRTHDAY AT THE SILVERSTONE CLASSIC

ACE CAFE CELEBRATES ITS 80TH BIRTHDAY AT THE SILVERSTONE CLASSIC

The immortalised Ace Cafe will be celebrating its 80th anniversary in spectacular style with a huge presence at this summer’s spectacular Silverstone Classic (20-22 July). 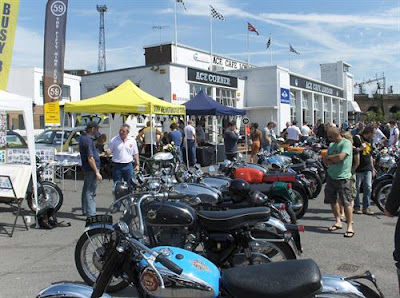 Saluting its legendary status among motorcyclists, the Ace Cafe will recreate a special homage to its remarkable heritage at the home of British motor sport and be the iconic hub at the heart of the huge paddock display of classic bikes. Fittingly, 80 of these will be selected for an evocative track parade.

First opened in 1938 as a wayside traffic café on London’s new North Circular Road, the Ace Cafe quickly became a Mecca for bike riders, notably with the speedy ‘Ton Up Boys’ in the fifties and then the Rockers in the sixties. 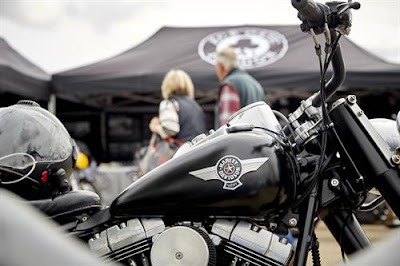 With changing cultures and the opening of the M1, the original cafe closed its doors in 1969… but the story did not end there. Following the huge success of an Ace Cafe reunion organised by Mark Wilsmore in the mid-nineties, the original building was refurbished and reopened in 1997, and ever since has been attracting biker pilgrimages from all over the globe.
Bringing that magic to Silverstone, the Ace Cafe will ‘take over’ the Pit Stop Café in the circuit’s National Paddock with menus, displays, dressings and music all embracing the unique
appeal and character of the original diner in north west London.

Adding to the festivities, the setting will also be home to a massive gathering of classic motorbikes – 80 of which will take to the hallowed Silverstone Grand Prix circuit for an astounding 80th birthday track parade at lunchtime on Saturday.

To encourage all classic bike owners to join the celebrations, a special Ace Cafe Motorcycle Display package is being offered in keeping with the historic values of the event. The package includes two general admission tickets and in-field parking in the dedicated Ace Cafe display area plus free parking for support vehicles and trailers if bikes are transported to Silverstone.
“This is a wonderful opportunity for all bike lovers to share in our 80th birthday celebrations and, of course, our ageless passion for motorcycles,” enthused Wilsmore, Managing Director of the Ace Cafe. “The Silverstone Classic is an absolutely incredible event and we are expecting a huge turn-out of both bikes and fans. It’s going to be a daunting ­– yet exciting – task for us to hand-pick just the 80 standout bikes that best represent 80 years of Ace Cafe history for the commemorative track parade.”

Although predominantly a peerless classic car and historic motorsport extravaganza, bikes are now very much part of the record-breaking show at the annual Silverstone Classic.
Recent events have seen some of the greatest names in two-wheeled motor sport back aboard their brutal period two-stroke machines as part of the epic World GP Bike Legends showcase. Now the addition of the Ace Cafe 80th Anniversary party, will further fuel the Classic’s appeal for bikers of all ages.

Classic bike owners wishing to be part of the revelries are asked to contact Ace Cafe directly or email experience@silverstoneclassic.com for details of the exclusive Ace Cafe Display Package.
All those wishing to attend this summer’s Silverstone Classic – whether two- or four-wheel fanatics – can still take advantage of a range of Early Bird offers if they act swiftly and purchase their tickets before the end of March.

As has proved so popular in the past, all these tickets – which must be purchased in advance – provide access to both Silverstone racing paddocks, all open trackside grandstands, live music concerts (topped by Soul II Soul and UB40 featuring Ali, Astro and Mickey), air shows, Drive Live test drives, funfair rides and the vast majority of the family entertainment on offer. Options on camping and hospitality are also available. Full details of all 2018 ticket prices are detailed on the silverstoneclassic.com website