The UK’s biggest independent road safety charity IAM RoadSmart has announced it will be renewing its contract with pioneer racer Maria Costello MBE as its Rider Ambassador for a further year. 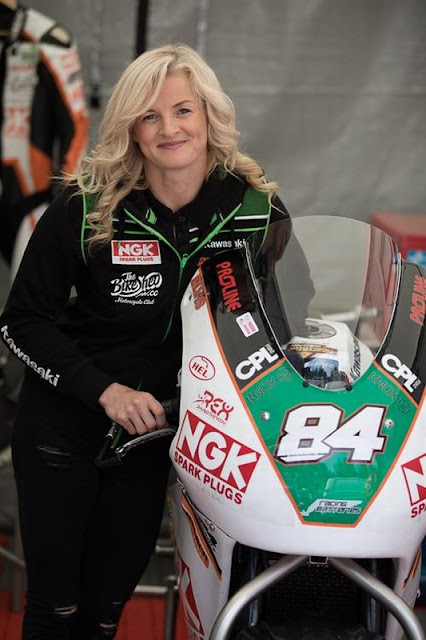 Maria, often known as the ‘Queen of Bikers,’ was hired by IAM RoadSmart to promote the road safety message in her work as a professional solo biker and sidecar racer. She will also talk about current developments on rider safety and advanced riding through her well-read social media channels.

In 2017 Maria staged a women-only biking track day at Donington Park in September, offering free places to IAM RoadSmart members. Maria will also be heading up a ladies’ day for members of IAM RoadSmart on 11 July this year at Thruxton circuit.
She was a special guest on IAM RoadSmart’s stand at Motorcycle Live at the Birmingham NEC last November.

In her professional career Maria needs no introduction. She has made 40 starts at the fearsome Isle of Man TT and became world famous as the first women ever to claim a podium on the island – with third place in the Ultra Lightweight category of the 2005 Manx Grand Prix.
For five years Maria held a Guinness World Record at the Isle of Man TT, when she lapped the Snaefell mountain course at an average speed of 114.73 mph in 2004 – becoming the fastest woman to have done so.

Maria said: “I am delighted to continue working with IAM RoadSmart, an organisation that is totally committed to reducing the number of deaths on the road for all users. It is a goal I believe in passionately, and the chance to work together for a further year on some exciting new projects was too good to pass up.”
Added Sarah Sillars, IAM RoadSmart Chief Executive Officer: “Having Maria as an ambassador for riding safety is a significant boost for IAM RoadSmart and the work we do. Having someone the calibre of Maria on board helps us reach an important audience – people who love bikes and riding them – and she will help inspire those enthusiasts that riding safe is the only way to ride!”