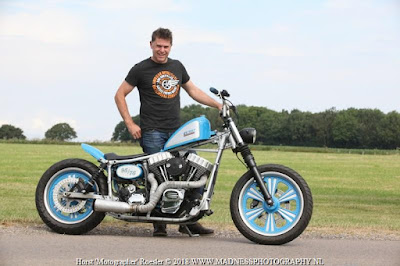 British Customizers still enjoy some freedoms – other than the over-regulated friends of the continental side of the Channel, the creativity to build "one-off" bikes with outstanding technology and designs that, to put it mildly, are "off the beaten path". Andy Tozer is also Sales Representative for renowned aftermarket distributor Custom Chrome Europe. Since 2007, Andy Tozer knows the British scene inside out – as well as the parts distributed. Because he also is working with them – for decades. His first BSA C15 looked already „bobbed“ and through the years he has owned numerous Evos and Twin Cams, most of which were modified – especially after he teamed up with CCE. "Tuff Burner" nevertheless is a very special project, into which Andy not just put a lot of thoughts and craftsmanship... 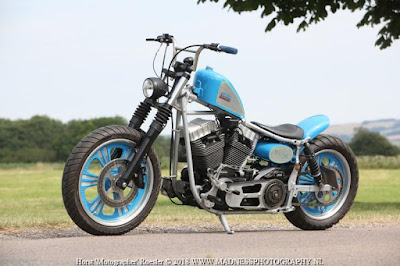 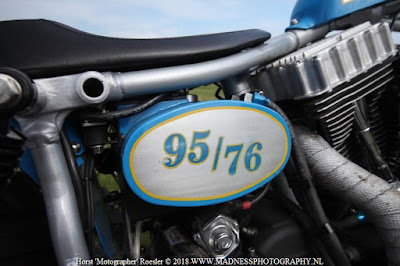 For tourist's, Kent is always highlighted as the "Garden of England" – and when you arrive in Dover, preferably on the Ferry (which offers a much better impression when watching the white cliff rising out of the mist or shining bright in the sunshine) rather than the faster, but highly un-romantic "Chunnel", you can explore that at any country road right from the start. Sellindge, base of CCE's UK sales representative, is situated just north of Folkstone, on a ridgeline from which in 1940 the "Homeguard" may have held watch for German invaders, but which has also a great view on the Romney March, for some decades the home of the legendary "Kent Custom Show", Englands cool and much missed biker event which also lured the
continental custom-pros onto the island to compete with British creativity. 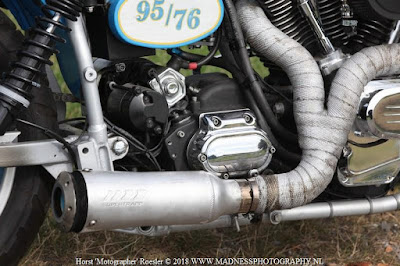 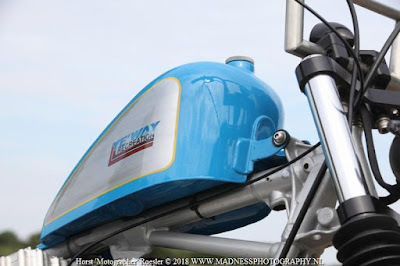 But that is history, other than Andy's pride and ride which is reality: When starting his project, the ideas came almost automatically – because instinctively he knew where this would be leading, althought he did not start with this specific intention: “It was a dark and wet November night when I decided to sort out a few issues with my Harley Softail. I should say that this was a perfectly sound and reliable Softail and it only needed the smallest bit of attention. I cleared a space in the garage and commenced to pull the bike apart – so I could tidy up the frame paint – intending to then turn my attention to fixing a few niggles. 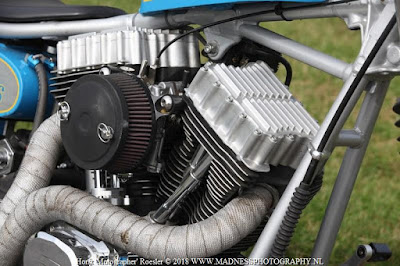 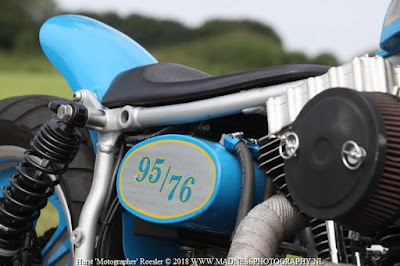 I was enjoying myself so much that I stayed in the garage until the wee small hours and only stopped when I’d run out of beer", introduces Andy the start of the project, "The next morning I got up, threw open the garage doors and ground to a slightly horrified halt. “Oh my gawd – what have I done?” was the first thing that went through my mind. It may not have quite as polite as that. It appeared that the beer had lasted longer than it should have and, in my addled state, I’d obviously got carried away with dismantling the bike..." What was spread all over the garage was the Softail in "components" or rather pieces, all of which were soon to become a new meaning and use. 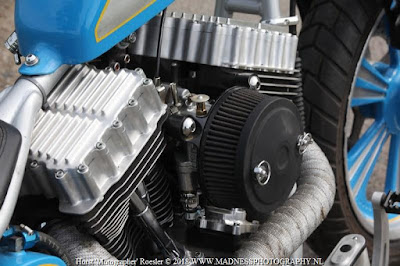 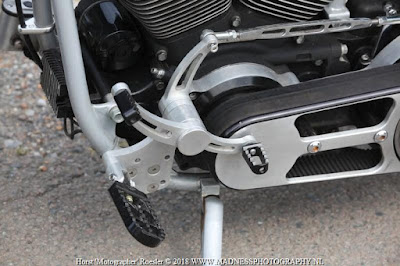 Everybody's history is defined by experiences in his or her youth and when and where you grew up: "Old School" is a term that may also be defined by the time you started, as well as the time frame to which you look back. As Andy prodly states: "To me it’s the 1980s. Football boots that only came in black. Curly Wurlys (Note by the author: A "girder-shape" chocolate bar by Cadburys, mmmhh!). The A-Team ... and my BMX!" His pride any joy at that time: "In 1982, when I was twelve years old, my Mum bought me a Raleigh Tuff Burner on ‘tick’ from the Littlewoods catalogue. Back then, Raleigh had just launched its range of BMX bicycles and the Tuff Burner was a fancier version of its base "Burner" model. It was blue with yellow five spoke Skyway mag wheels. I was made up! I spent the following school holidays building jumps and ramps, breaking the bike and myself. It was great!" 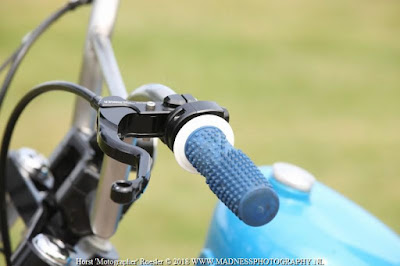 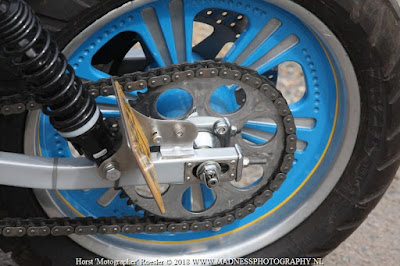 So why not re-creating some of these great memories in form of a Custombike? Not as agile and lightweight as the original, but quite more powerful. "I figured that I’d build a BMX out of my Softail", grins Andy, "and everyone I told of this plan just rolled their eyes and shook their heads in derision ... much the same as my Dad used to do after finding tyre tracks in his flower beds!" Little did the doubters probably knew about Swiss Customizer Danny Schneider, who after his FMX career became "Hard Nine" famed Customizer and hit the international magazine covers with his "DMX" themed 1942 WLA Flathead that Danny not just built like a lightweight BMX, but subsequently RODE it like a BMX! While parted by Channel, Alps and distance, the Custom Chrome Europe Dealershow somewhat connected Andy and Dany, as does the spirit to create something unique. 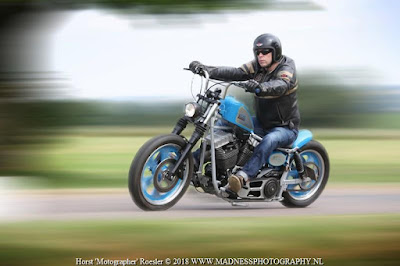 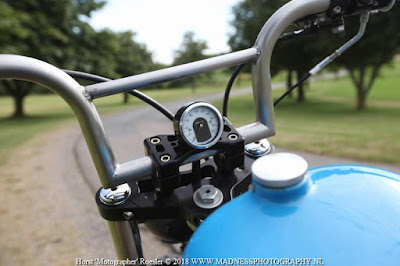 “Now, I’ve always loved Shovel frames – the cast headstock and subframe joints", says Andy,  "so, I did some research, finding diddly squat about putting a Twin Cam motor in a Shovel." Which – to say the least – was at that time a rather unorthodox idea, knowing the quality and benefits of engine, gearbox (connected for more stability in the stock setup) and rolling chassis of the Twin-Cam Softails. Germany's MB Cycles "Murder One" Build-off winner and HD Wuerzburg's "Twin Cam Single" were still a few weeks away or in planning, so Andy was already "pioneering" new fields. The essential accessory – one of the components not available from the Custom Chrome Europe cataloge – an authentic Harley-Davidson Shovelhead frame. Andy knows his business so "I just spurred on Facebook for a frame and Destiny Cycles contacted me to say they had one available. A couple of phone calls later and after some explanation of what I actually wanted, it was arranged that I would take the engine, gearbox and oil tank up to deepest, darkest Yorkshire", adds Tozer, as showbike experienced Vic and Lynn would be a perfect choice to machine the neccessary adaptions such as modifying the typical Shovelhead rear downtube to fit Twin Cam engine case and and gearbox (upgraded with a RevTech 6-speed kit) together into the old frame. The connecting BDL primary belt drive that runs visually open is still protected by a sideplate. Four weeks later the job was done and Vic and Lyn Jefford of Destiny Cycles dropped the frame off to me when on their way to the annual spring Pecquencourt show in northern France. 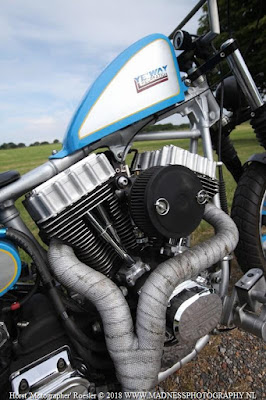 “From there on, the build was straightforward with much of the modifications and fabrication done by myself", states Andy: "Some parts were recycled from other projects – such as the rear mudguard (which has a recessed panel to house the electronic components) that has been modified for a number of bikes, getting shorter and shorter every time it’s re-used!" Knowing the CCE catalogue inside out,  "I did use some of the pick of the best the aftermarket parts industry can offer, like Kustom Tech grips, Beringer Aerotech calipers, Rocket Bobs’ Zombi ’bars, and given for whom I work, Custom Chrome parts like the RevTech wheels came as a natural choice – and they are a fitting design too! 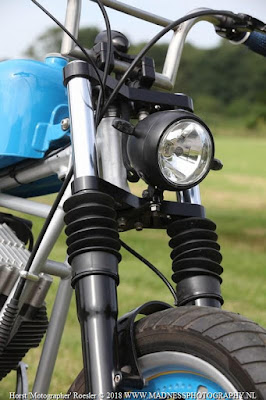 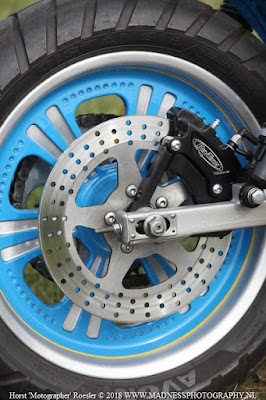 No need to mention where the "blueprint" for tha colour came from: “The finishing touch was the paintwork – in as close as possible to the blue of my good ole Raleigh "Tuff Burner" – by Stig at Sickboyz Customs", concludes Andy, "just five months after that "rash night" in my garage, I was taking the bike to shows and events around the country as part of my Custom Chrome Europe display." Catching considerable attention! The frame is now only 25 mm longer and 20 mm taller than that of a stock Shovel frame and, with very little weight and the power of the 95 cubic inch Twin Cam motor, it’s great for arsing around town and honing through traffic. Which comes very handy on those narrow Kentish roads. It may not be the BMX dream bicycle of 1982, but it's a superb substitute! And it's far from a mass-produced catalogue-item, this "Tuff Burner" its handcrafted, all unique and a complete one-off. Just what you expect from a British-made custombike – and you don't have to pedal any longer... 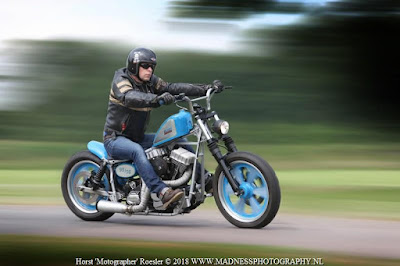