Harley-Davidson’s response to its hugely disappointing 2017 4Q and full year results is to constrain future manufacturing capacity by closing two factories for a total net job loss of around 500 jobs in what it describes as “Manufacturing Optimization”, and point to “progress in building riders” and expanded product development through increased investment in electric motorcycle technology. 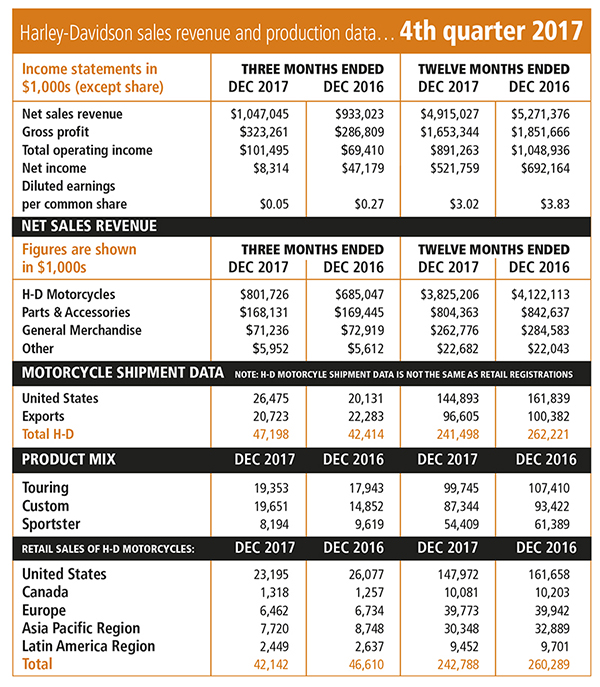 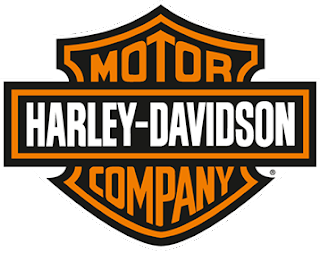 The company’s worldwide retail motorcycle sales were down -6.7 percent in 2017 compared to 2016, with domestic U.S. retail sales down -8.5 percent while international retail sales fared better at down -3.9 percent.
“Our actions to address the current environment through disciplined supply and cost management position us well as we drive to achieve our long-term objectives to build the next generation of Harley-Davidson riders globally,” said Matt Levatich, president and chief executive officer, Harley-Davidson, Inc.

“We finished 2017 with over 32,000 more Harley-Davidson riders in the U.S. than one year ago, and we delivered another year of strong cash generation and cash returns to our shareholders.”
Harley’s release went on to say that “as the company executed against its long-term objective to build the next generation of Harley-Davidson riders globally, 57 new international dealer points were added in 2017, and U.S. dealers trained more than 62,000 riders through the Harley-Davidson Riding Academy. The company also maintained its number one 601+cc motorcycle market share position in countries including the U.S., Canada, Japan, Australia and India for 2017.” When asked, the company was unable to say how many of these new riders had bought a Harley-Davidson motorcycle as a result of their Rider Academy training.

Harley’s statement went on to say that the company “remains fully committed to investing in product development to inspire new riders through redefining its product in traditional spaces and expanding into new spaces. The company is on target to launch its first electric motorcycle
within 18 months. Today, the company announces it will invest more aggressively to lead in the application of electric motorcycle technology to inspire ridership among a new audience.”


CEO Matt Levatich added that “the EV motorcycle market is in its infancy today, but we believe premium Harley-Davidson electric motorcycles will help drive excitement and participation in the sport globally. As we expand our EV capabilities and commitment, we get even more excited about the role electric motorcycles will play in growing our business.”
For the record, ACEM, the Brussels based international motorcycle industry trade association for Europe says that (for the 28-member states of the European Union) a mere 4,121 electric motorcycles were registered in the whole of 2017; plus 27,029 electric mopeds (equivalent to 50cc and smaller units) and a further 3,242 electric “quadricycles”.
"4Q domestic US retail -11.1 percent" That is in a market of some 360 million consumers of riding age, where development of demand for E-blkes is at least a decade or more ahead of the United States; and in a continent where the concept of Urban Mobility is well understood and widely accepted (even at regulatory level) as a potentially major contributor to environmentally friendly and congestion busting future facing transportation policy.
Following the release of its 4Q and FY 2017 fiscals, Polaris CEO Scott Wine responded to suggestions that Polaris was perhaps falling behind the curve in E-bike terms after having been well ahead of Harley said that, for them, it wasn’t so much a technology issue but one of ROI – suggesting that it was difficult, at this stage, to see a pathway to profits in the sector in the short term.
Harley-Davidson describes its plans to close its Kansas City, MO final assembly plant as a step to “improve” its manufacturing operations and cost structure by “commencing a multi-year manufacturing optimization initiative anchored by the consolidation of its motorcycle assembly plant in Kansas City into its plant in York, PA. The company expects to incur restructuring and other consolidation costs of $170 to $200 million and capital investment of approximately $75 million over the next two years and expects ongoing annual cash savings of $65 to $75 million after 2020.”
"The EV motorcycle market is in its infancy" The closure of the Kansas City plant is expected to cost some 800 direct jobs in that area, with some 400 new hires slated for York. The other facility to close is Harley’s New Cast Alloy wheel factory at Adelaide in southern Australia at a cost of a further 100 direct jobs.
Levatich continued, saying “the decision to consolidate our final assembly plants was made after very careful consideration of our manufacturing footprint and the appropriate capacity given the current business environment. Our Kansas City assembly operations will leave a legacy of safety, quality, collaboration and manufacturing leadership.”
The annual figures concealed a dramatically disappointing final quarter of 2017, one theoretically underpinned by the new M-8 engined Softails becoming available at dealerships.
In the fourth quarter, Harley-Davidson worldwide retail motorcycle sales declined -9.6 percent compared to the prior year. Harley-Davidson domestic U.S. retail motorcycle sales were down -11.1 percent in a market that was down by around half that at -6.5 percent compared to the year-ago quarter. Fourth quarter market share was down on 3Q 2017 and 4Q 2016 share at -50.8 percent in the 601+cc segment.
Harley is making much of its management of production numbers and inventory but revealed that “fourth quarter revenue from motorcycles and related products was up versus the prior year behind higher motorcycle shipments, resulting in an increase in operating margin as a percent of revenue compared to the same period in 2016.”
For 2018, Harley-Davidson says it anticipates full-year motorcycle shipments to be approximately 231,000 to 236,000 motorcycles – down by between -2 and -4 percent. In the first quarter of 2018, Harley-Davidson expects to ship approximately 60,000 to 65,000 motorcycles.
Harley-Davidson says it expects full-year 2018 operating margin as a percent of revenue to be approximately 9.5 to 10.5 percent, including manufacturing optimization costs of $120 to $140 million.
The company anticipates 2018 capital expenditures of $250 million to $270 million which includes approximately $50 million to support manufacturing optimization.
Financial services operating income increased +5.9 percent in the fourth quarter compared to the year ago period.
"2017 international retail -3.9 percent" Fourth quarter 2017 diluted EPS decreased to $0.05 from $0.27 in the fourth quarter of 2016. Fourth quarter 2017 net income was $8.3 million on consolidated revenue of $1.23 billion versus net income of $47.2 million on consolidated revenue of $1.11 billion in the fourth quarter of 2016.
Full-year 2017 diluted EPS decreased to $3.02 from $3.83 in 2016. Full-year net income was $521.8 million on consolidated revenue of $5.65 billion versus net income of $692.2 million on consolidated revenue of $6.00 billion a year ago.
Cash and marketable securities were $687.5 million at the end of 2017, compared to $765.5 million at the end of 2016. Harley-Davidson generated $1.01 billion of cash from operating activities in 2017 compared to $1.17 billion in 2016. On a discretionary basis, Harley-Davidson repurchased 8.7 million shares of its common stock at a cost of $456.1 million during 2017. During the fourth quarter of 2017, 169.2 million weighted-average diluted common shares were outstanding. At the end of 2017, 10.6 million shares remained on a board-approved share repurchase authorization.