Indoor Flat Track making a bold return to Minneapolis
at Lee & Rose Warner Coliseum in March.
SAINT PAUL, MN (December 5, 2017) – The largest custom bike and car show in the Midwest, the Donnie Smith Show - Midwest Extravaganza, Bike, Car & Tattoo Expo, is bringing authentic Indoor Flat Track motorcycle racing back to the Twin Cities, where the roots of the sport were born. For 13 seasons, from 1968 to 1980, the revered Minneapolis Armory hosted “The Indoors,” indoor flat track racing that filled otherwise dreary winter months with handle-bar-to-handle bar, down-and-dirty, bar-banging action. Over those years, hundreds of privateer racers found a home in which to compete. As one of the largest, most successful and longest-running flat track events, The Indoors put the sport on the map. Now the Twin Cities will welcome the heart-pounding thunder of flat track racing once again on March 23, 2018 at the Lee & Rose Warner Coliseum on the Minnesota State Fairgrounds. 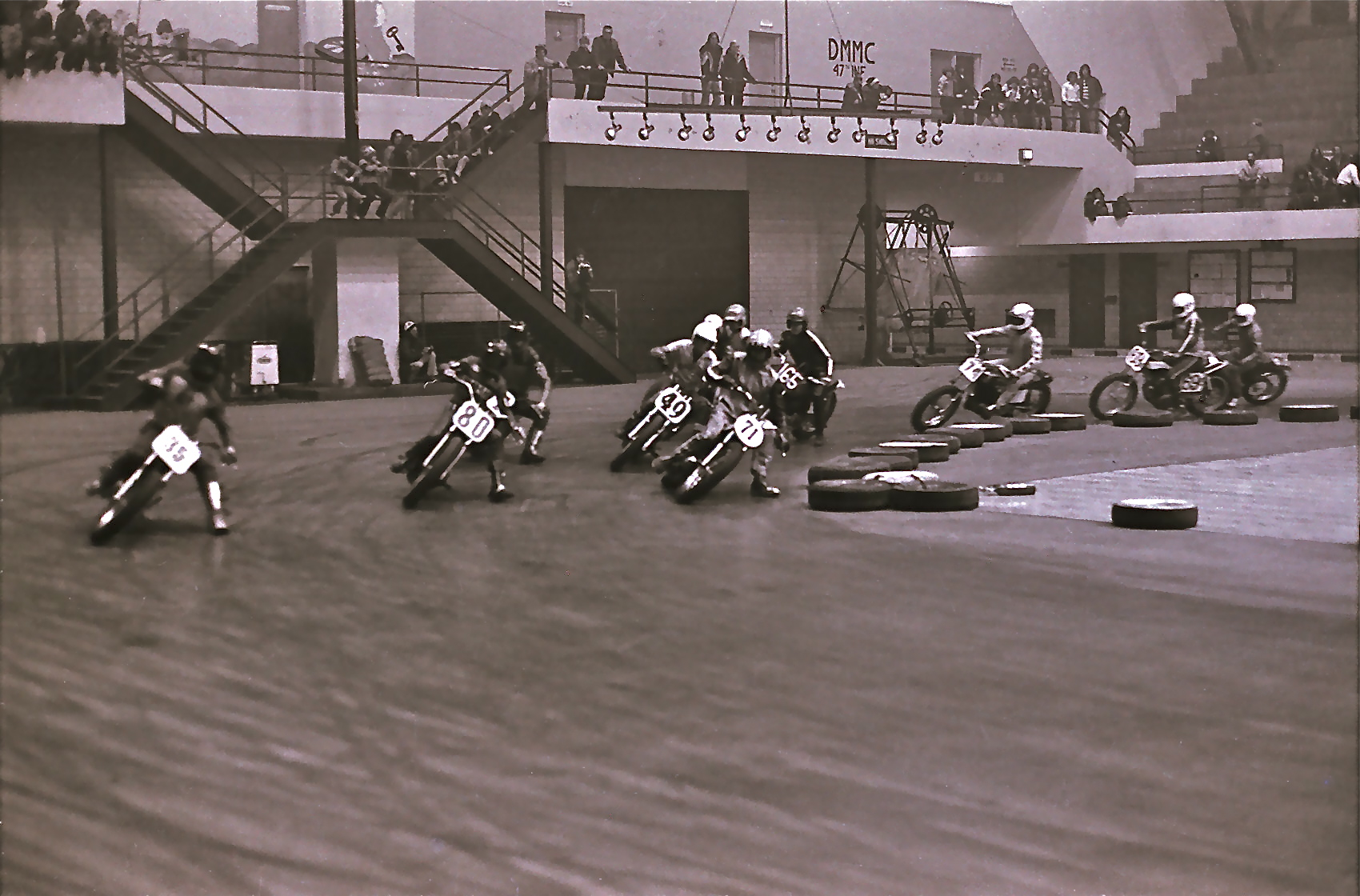 “Flat track plays into that American spirit of independence, competitiveness and the need for speed,” said Neil Ryan, promoter of the Donnie Smith Bike & Car Show. “We have a rich heritage going back into the ‘60s. The Donnie Smith Show’s always had a swap meet component, along with the biggest custom show in the region. Adding racing back to the mix brings it full circle and completes the package.”
The stars of the show come from diverse rider backgrounds ranging from crusty championship legends and pro flat trackers to battle-hungry amateurs. When these guys thunder off the line it'll be no-holds-barred as they battle it out around the track.

The historic return of Indoor Flat Track racing to the Twin Cities promises to tap into the high-energy fan enthusiasm sparked by the recent explosion of races across the country being
coupled with bike shows, concerts and pro championship events.

Classes include Pro Twin, Pro Single, Hooligan, Vintage, Amateur and Mad Dog with a $15,000 cash and trophies. Racers may enter at IndoorFlatTrack.com.

Tickets are $15 in advance on the above website. The first 500 children 12 and under in the door accompanied by a parent will receive free entry.

Donnie Smith Show
The Donnie Smith Show will take place at the St. Paul RiverCentre in St. Paul, Minn., 9 a.m. to 7 p.m. Saturday, March 24 and 10 a.m. to 5 p.m. Sunday, March 25, 2018. In addition to motorcycles and cars, the 225,000-square-foot indoor event showcases a Tattoo Expo and a popular swap meet billed as “The Largest Parts Extravaganza on the Planet.”

Tickets for the Donnie Smith Bike & Car Show are on sale at the RiverCentre Box Office, all Ticketmaster locations, charge by phone at 800-745-3000 or online at www.ticketmaster.com. Children under the age of 12 are admitted free.

About the Donnie Smith Bike and Car Show
In its 31st year, the famed Donnie Smith Bike and Car Show presented by Dennis Kirk is the largest custom bike and car show in the Midwest. The show draws the nation’s most prestigious brands, top competitors and tens of thousands to the RiverCentre in Saint Paul, Minn. It is widely known as the annual kickoff to the riding and cruising season and features a unique mix of competitions, shopping and entertainment in a fun, family-friendly environment with 35 classes of custom motorcycles, 16 classes of cars, the largest swap meet on the planet, a tattoo expo and other entertainment. The Show is reviving the historic thrills and spills of indoor flat track racing at the Lee & Rose Coliseum on Friday, March 23, 2018. Additional information may be found at www.donniesmithbikeshow.com.