Scott Wine, Chairman and Chief Executive Officer of Polaris Industries, said:  “Our emphatic return to profitable growth in the third quarter was a testament to the power of the Polaris brand, the strength of our dealer network and the competitive drive of the Polaris team. During the quarter, strong retail growth in both North America and nearly all of our international markets drove record sales and highlighted our ongoing product innovation, improving product quality and sharpened execution. 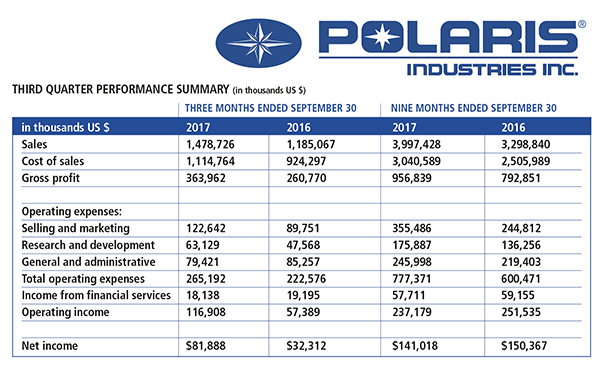 “We delivered North American unit retail sales growth of +13 percent and overall company sales growth of +25 percent, about half of which was organic, while lowering North American dealer inventory seven percent year-over-year. Results were strong throughout our portfolio, led by Indian Motorcycles’ exceptional performance as they accelerated share gains and outpaced a declining North American motorcycle market, while also delivering strong growth in Europe, Australia and Asia.

“I am particularly proud of the improved performance from our Off-Road Vehicle business, which was fueled by a well-planned and executed factory authorized clearance sale and the strong reception of our model year 2018 introductions. Encouragingly, RZR retail sales were especially strong in the quarter, and we had our best ATV retail quarter in two years.
“Most importantly, strong total company sales growth translated to bottom-line improvement. Despite higher than expected costs for warranty and re-work and complications from Hurricanes Harvey and Irma, we delivered significant operating profit growth and earnings per share expansion for the quarter. With strong growth in revenue, profitability and cash flow, I feel very good about the performance of the Polaris team and our improved outlook for the fourth quarter and beyond,” said Wine.

North American consumer retail demand for the Polaris motorcycle segment, including Indian Motorcycle and Slingshot, was up mid-single digits percent during the 2017 third quarter. Indian Motorcycles increased retail sales +16 percent, partly driven by new model introductions, including the new Chieftain Elite and Limited models and Roadmaster Classic. Indian Motorcycle market share surpassed the ten percent mark in September.
Motorcycle industry retail sales, 900cc and above, were down high-single digits percent in the 2017 third quarter. Slingshot's retail sales were down, although the rate of decline decelerated during the quarter.

The company has increased its sales guidance and expected earnings per share range for the full year 2017 from previously issued guidance. The company now expects adjusted net income to be in the range of $4.75 to $4.85 per diluted share, compared with adjusted net income of $3.48 per diluted share for 2016. Full year 2017 adjusted sales are now anticipated to increase in the range of 18 percent to 19 percent over 2016 sales of $4,516.6 million.
Off-Road Vehicle (“ORV”) and Snowmobile segment sales, including their respective PG&A related sales, were $1,007.4 million for the third quarter of 2017, up 12 percent over $895.6 million for the third quarter of the prior year, driven primarily by improved side-by-side shipments.

International sales to customers outside of North America, including PG&A, totaled $156.8 million for the third quarter of 2017, up +1 percent from the same period in 2016. Sales in EMEA and Asia Pacific increased low-double digits percent in the third quarter, with Latin America growing sales mid-single digits during the quarter.

Operating expenses increased 19 percent for the third quarter of 2017 to $265.2 million from $222.6 million in the same period in 2016, which included $1.3 million in Victory wind-down costs and $3.5 million of TAP integration expenses. Excluding these costs, operating expenses increased primarily due to the addition of operating expenses from TAP, as well as increased research and development expenses and increased selling and marketing costs related to the introduction of new products, offset somewhat by lower legal related expenses.
The company reported third quarter 2017 net income of $81.9 million, or $1.28 per diluted share, compared with net income of $32.3 million, or $0.50 per diluted share, for the 2016 third quarter.