Championship of the Americas

AIMExpo presented by Nationwide Insurance closed its doors on Sunday September 24th after four great days at the Greater Columbus Convention Center, Ohio, with promising dealer and consumer attendances leaving most exhibitors satisfied at the
progress the show is making and positive about the event’s Midwestern United States debut after four years at Orlando, Florida. 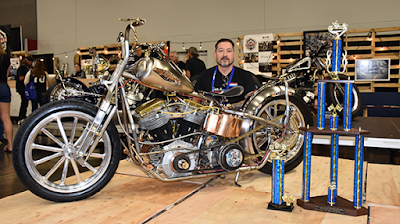 The final day saw the results announced for the Championship of the Americas, AMD World Championship of Custom Bike Building’s United States affiliate event, with the FreeStyle win, and expenses paid trip to compete at INTERMOT ‘Customized’, Cologne, Germany, in October 2018, being taken by Tim Dixon of Gas Axe Chop Shop in Tennessee. 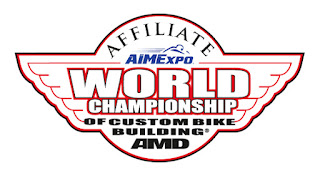 Voted for by the competitors themselves, Dixon took the win with a 1959 Panhead engined hand- crafted chopper called ‘Pennie Lane’. Custom designed, using a Model A front axle/reverse shock set-up with a Model A front spring for the rear swingarm, all the work was done in-house by Dixon with most of it on manual machines with silicone bronze welding.


The engine has an Andrews cam and the magnesium front wheel is from a 1960s dragster; all the brass/copper pieces were handmade. 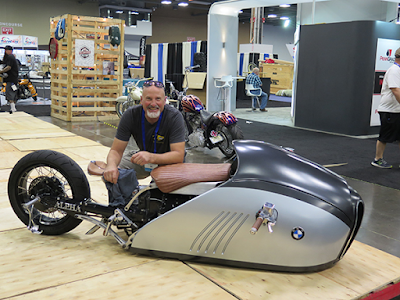 The People's Choice went to the BMW Alpha built by Salt Lake City machinist Mark Atkinson, and inspired by a concept created by Turkish designer Mehmet Doruk Erdem.
The Street Custom Class win went to Dusty Pine/Dawg’s Chop Shop with the hardtail framed 1200cc 1993 Sportster that gave him the K&N Filters sponsored Modified Harley Class win at the Cleveland round of the J&P Cycles Ultimate Builder Custom Bike Show series that is staged each winter at the Progressive International Motorcycle Shows (IMS). 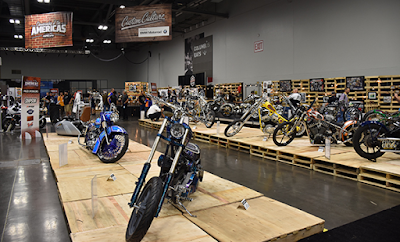