During the 77th Annual Sturgis® Motorcycle Rally™, the biggest motorcycle rally in the world organized in the American city of Sturgis, built by the Polish Game Over Cycles company motorcycle called The Recidivist won 1st place in „Most Unusual” class in the  Rat’s Hole Custom Bike Show, the oldest and most prestigous custom bike show in the world. 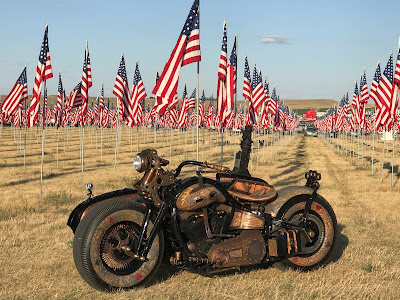 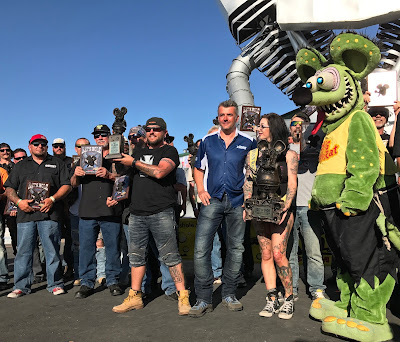 The Recidivist is world's first tattooed motorcycle. The bike, which was unveiled in 2014, in Sturgis was displayed for the first time in America and it came to the US with its new construction element – a fully tattooed sidecar which in the USA had its world premiere. Sturgis rally (South Dakota) is the biggest motorcycle event in the world. This small town with popluation just under 7000 people, once a year turns into the bike capital of the world and gathers hunderds of thousands of motorcyclists, together with the biggest media and personalities of the industry. According to the organizer's data, in 2016 over 448 000 people took part in the rally.  Rat’s Hole Custom Bike Show is world's oldest custom bike show. First event of the series took place in 1973 and today in this most prestigous event in the industry, bikes from all over the world compete for the famous Rat trophy. 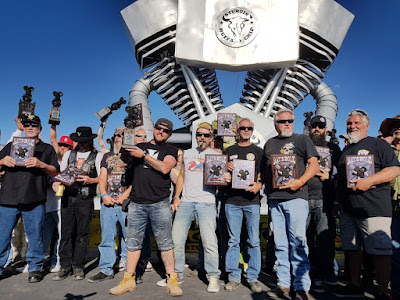 „Sturgis rally and Rat’s Hole show are legends. The biggest rally in the world and the legendary custom bike show organized in the birthplace of the customizing, so the USA. We are proud, that during our first visit to the USA with one of our bikes we were awarded in such a prestigous competition” - commented on his company’s achievement Stanisław Myszkowski, founder and the owner of GOC.

The Recidivist is a machine inspired by the art of permanent body adornment. Motorbikes are commonly adorned with tattoo motifs using an airbrush, however the uniqueness of The Recidivist lies in the fact that the bike's entire construction is covered in tattoed skin branded directly onto the bike's tires, tanks, seat, rear fender, lamp and many other smaller elements. Light colored cow hide leather - similar to the color of human skin - is engineered onto the bike. Artists from Polish tattoo studios applied traditional works of tattoo art onto the bike using. All
of that makes The Recidivist world's first tattooed motorycle.

The worlds of motorbikes and tattooes have long been kindred spirits. The theme of the The Recidivist relates to this traditional relationship. In the USA, bikers used to tattoo for personal reasons - to express their character and lifestyle - as well as their social attitude. The Recidivist  as an artistic vision references those traditions and through its construction and decorations presents a story of a man with strong character - a person, who values individuality, personal expression and sense of freedom.

References to the traditions are expressed not only in bike's theme, but also in its contruction. The motorcycle's construction include elements that draw from the look of tattoo machines. All of these parts are fully operational elements of bike's construction, and the mechanisms of these elements operate in the same way as they do in the original tattoo machines:
- bike's front suspension has the look of a traditional coil tattoo machine
- the exhaust pipe looks exactly like a modern tattoo machine, including the tattooing needles which when you start the bike, move exactly as they do when the tattoo machine applies ink under skin
Further more, the machine's design is based on a number of technical solutions drawing from the turbulent lifestyles of post-war bikers.
- the lever starting the bike has a shape of a bomb detonator lever.
- the rear light indicators look like brass knuckle-dusters
- front wheel caliper brakes have the appearance of handcuffs
- front clutch and brake handles are formed in the shape of "butterfly" knives
- the break pump lever is shaped in the form of a section sign.

The Recidivist is based on the Harley-Davidson Softail model. From the original machine only the engine - a Twin Cam 96” - and part of frame are left. All other construction elements and mechanisms are original solutions created by constructors of Game Over Cycles. Bike's unveiling took place in September 2014  at the London International Tattoo Convention 2014 - the most prestigious body adornment convention in the world.

The Recidivist's sidecar was created in 2017 and will have its world premiere at the Sturgis 2017 rally. The sidecar is fully tattooed, both outside and inside and also on the tyres. In terms of the construction the sidecar relates to the bike, mainly it's fuel tank, as it has similar construction made of two sheets of metal joined with tubes, which imitaes the look of a human spine. Sidecar tattoos also relate to motifs present on the bike, but as it is with tattoos on a human body, with time they change together with the person they are tattooed on. Given elements get bigger, change colors, shapes and meanings. That is why on the sidecar there are tattoos paralelled with the ones on the motorcycle, such as the Themis or handcuffs, but it also includes new motifs in the form of relations to the abstract art of  H.R. Giger and Polish artist Zdzisław Beksiński, as well as inpirations taken form the real life, such as selected images from the history of Harley-Davidson company.
Construction of the motorcycle and sidecar took 3000 hours. Tattooing of the bike and sidecar took over 2500 hours.
The Recidivist with the sidecar will stay in the USA for the forthcoming weeks, as the GOC crew was invitaed by the  Harley-Davidson Museum in  Milwaukee to participate in the Labour Day Weekend Rally, main event organized annually at the Museum. The rally will take place between 30.08 – 03.09 2017. Throughout the whole event the bike will be displayed in the Custom Culture Artisan Display & Tattoo Parlor. On the 3rd of August (Sunday) it will also take part in the H-D Museum Custom Bike Show.

The Recidivist and the sidecar – technical information:

• 1st place in „Most Unusual” class in the Rat’s Hole Custom Bike Show, the oldest and most prestigous custom bike show in the world organized at the Sturgis® Motorcycle Rally™, the biggest motorcycle rally in the world (08.2017, USA)

Game Over Cycles (GOC) is a Polish custom motorcycles manufacturer formed in 2012. The company is known for its original creations, such as The Recidivst - world’s first tattooed motorcycle and Behemoth Bike - a custom motorcycle created in collaboration with global Polish metal music legends Behemoth. Machines created by Game Over Cycles have won awards at some of the world’s biggest custom bike competitions. In just four years, the company received eight awards at European Bike Week, having won the prestigious “People’s Choice Award” no less than four times. European Bike Week is Europe’s largest open and free bike festival and one of the biggest in the world. The event has been organized annually in the Austrian village of Faaker-See and according to organizers' data in 2016 the event saw an attendance of more than 120,000 visitors and 70,000 bikes from around the world. In June 2016 GOC became the official dealer of legendary motorcycle brand Harley-Davidson. In march 2017 the company officially opened GOC Harley-Davidson Rzeszów, the biggest Harley-Davidson dealership in Poland and Central-Eastern Europe as well as GOC showroom.