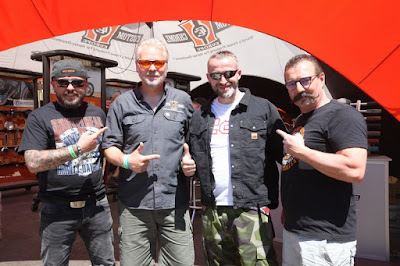 You can meet the wildest people at a Harley-Davidson SUPERRALLY: Especially when the acting motorcycle stuntmen is riding a „Sportster“ and will be a future „Guiness Book of Records“ holder like Maciej "DOP" Bielicki and his main sponsor “Game Over” Stanisław Myszkowski who were greeted by CCE Managing Director Andreas Scholz and Marketing Manager Axel Scherer who had sponsored the World record attempt with helmet, gloves and jacket, additionally connecting the rider to Avon tires which sponsored the tires for the new record. 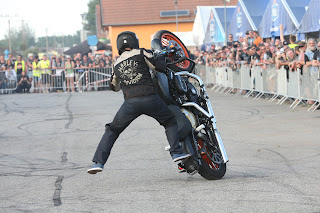 The attempt took place on Saturday, May 20 in Rzeszow/Poland, just about 100 km west of Game Over Cycles new Harley-Davidson shop in Lubaczów and succeeded in breaking the previous 2 miles (3.6 km) record established in the USA ¬– according to official measurements after the ride, the distance reached was exactly 4479.47 m which was covered in continuous rolling burnout. Maciej DOP set a new world record for the length of the rubber strip on a “rolling burnout”. 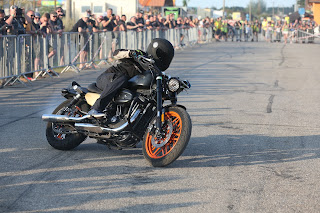 The record was performed on the new Harley-Davidson “Street Rod” 750 motorcycle, prepared by GOC. While the result is unofficial for the moment – organizers have submitted all necessary witness testimonies and video recordings to the Guinness World Records office – the confirmation to recognize the record officially is expected soon. 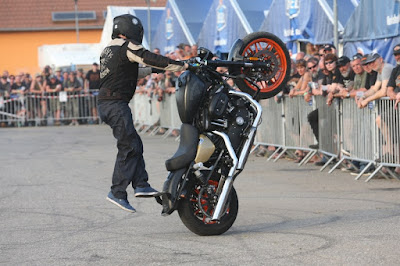 At the Superrally 2017 in Pasohlavky, Maciej "DOP" Bielicki performed his artistics on prepared “Sportster”, used for both high-speed drifts and acrobatic riding. Check out his riding skills at www.stuntstory.pl or take a look at these images, taken during Friday’s 7 pm performance.