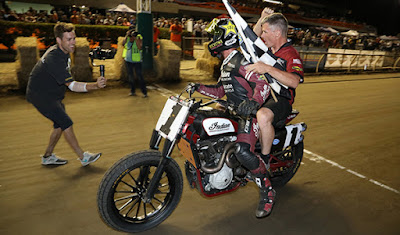 Staged at the Cal Expo Fairgrounds, the Harley-Davidson Sacramento Mile presented by Cycle Gear “witnessed both a rider and a manufacturer in action at the height of their powers.”
Smith and his fellow members of the Indian “Wrecking Crew”, Jared Mees (No. 9 Indian Motorcycle Rogers Racing Scout FTR750) and Brad Baker (No. 6 Indian Motorcycle Racing backed by Allstate Scout FTR750), “were again in a class of their own on Saturday night.”
After 25 laps Smith’s victory came by a minuscule 0.025-second margin over Mees, with Baker a further 0.05 seconds adrift in third. The win was Smith’s seventh in succession at the Sacramento Mile, and his third in a row this season.

After securing sole possession of the championship lead, Smith said “I played my cards just right. I sat back there, saved my tire, and went hard the last couple of laps.”
While he got pushed out of at least a share of the championship lead for the first time this season, Mees did manage to maintain his perfect 2017 podium streak with his runner-up result in Sacramento, saying “I’ve got to give a big shout out to my team. It was a good race, and it’s great to get another Indian sweep with these guys. It stinks getting second, but it’s great for Indian Motorcycles. I’m honored to be a part of it.”
Sammy Halbert (No. 69 Estenson Logistics Yamaha FZ-07) snatched fourth place by a narrow 0.050 second margin from quick-starting Jeffrey Carver Jr. (fifth on the No. 23 Carver’s BBQ Kawasaki Ninja 650). It was another disappointing weekend for Harley-Davidson and their XGR750R - Brandon Robinson was 9th, 14.32 seconds behind Smith, and Kenny Coolbeth Jr was 16th, having only completed 16 laps.
Next week, the American Flat Track will make the first of two 2017 doubleheader stops in Springfield, Ill., with Saturday May 27’s Springfield TT and Sunday May 28’s Harley-Davidson Springfield Mile I.