Arguably the oldest and longest established custom bike show in the world, the 43rd annual Custom Bike Show staged by Swedish riders’ club MC Norrtälje will again be staged at the coastal city of Norrtälje, an hour north east of the Swedish capital Stockholm. 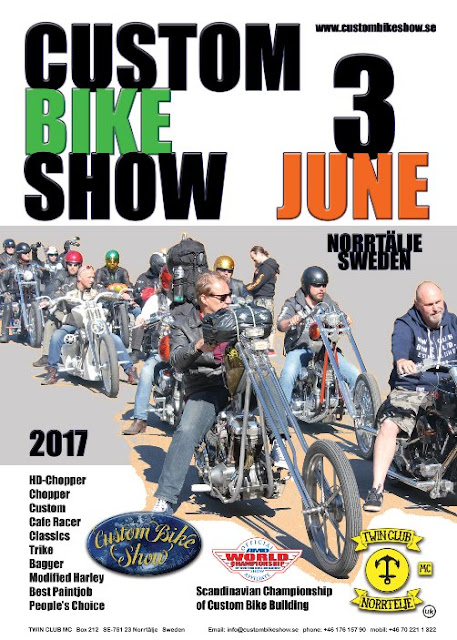 An established and iconic event in Europe’s annual calendar, the unique one-day Custom Bike Show is a fixture at the first weekend of June (Sweden’s annual national holiday weekend) and attracts thousands of visitors from as far afield as Norway, Finland, Denmark and the Baltic countries, as well as the length and breadth of Sweden itself.

Last year saw over 200 bikes in 8 classes compete for vendor prizes that included a RevTech transmission donated by Custom Chrome Europe (CCE) and an expense paid package for the winners to compete at the next AMD World Championship of Custom Bike Building at INTERMOT ‘Customized’ (in October 2018), paid for by the members of Twin Club MC.

This will be the 13th year of affiliation for the Custom Bike Show, making it the longest established ‘AMD Affiliate’. In total over 10,000 visitors are expected, and with more than 5,000 bikes descending on what is a tranquil former port city on the Swedish coast that regularly throws its doors open and welcomes bikers from all over northern Europe, the city authorities at Norrtälje are among the most “rider friendly” in Europe.

Three separate judging systems are used to determine the winners, with a jury of industry professionals deciding on three World Championship affiliate prizes, with the competitors deciding the class prizes, and a Public Choice winner, sponsored by CCE. Last year saw a Bagger class added, which provided the Public Choice winner and Best Paint award.
Last year’s winning bike, selected by the jury, and which went on to compete in the Freestyle class at last year’s AMD World Championship, was a classic Swedish style ‘70s chopper with a 93” S&S Pan-style engine in a Swedish made UCC (Unique Custom Cycles/Gordon Rooth) 40-degree rake, 3” stretch rigid frame with a 4” over Springer front end made in Finland by Mr Moore Motorcycles.