It took us over 22 hours to get there, (and on the way there of course being stopped by The Law for speeding, but the very nice officer let us go with a fair warning, thank you very much!) but man what a great show!

The Donnie Smith Show had it's 30th Anniversary this year, and on top of that we celebrated Donnie Smith' 75th birthday! 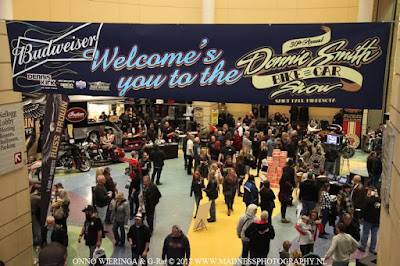 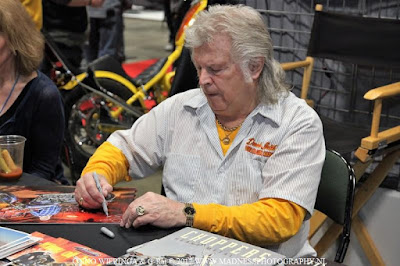 The Midwest's Largest Custom Bike & Classic Car Show is famous, since John Parham (J&P Cycles) started this show 30 years ago, it has grown and grown, recently a Tattoo convention is added to the show, where 'the biggest swapmeet on the planet' as they say, also is being held.
Plenty to do and to see, the Bagger trend is still Hot in the USA, but Old School Choppers are very popular too. During the show two worldwide reveals got the public's attention; the new Kuryakin 'Rock, Rumble & Rebellion, not your fahter's 3 R's'industrial looking 'Sport Bagger' and the S&S Dyna, a very powerfull S&S T143 c.i. motor sits in the 2016 Dyna, outfitted with small bags and a huge fairing,reflecting the muscle car Shelby Cobra styling. Both bikes drew a crowd, with Kuryakin's big boss Holger More explaining everything about their bike and S&S inviting me to ride it on the dragstrip... Should I? are you f*ckin'kidding me?! Yes, I will! More about that later. 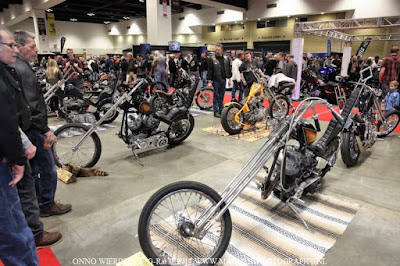 Yellow Yellow, as most Hamsters come to the Donnie Smith Show, plenty of them, of their work and bikes are to be seen, pure eye-candy for all custom bike lovers! Dave and daughter Jody Perewitz, the Ness family, Chris MCGee and his MagnaFlow exhaust systems, Dennis Kirk, Kuryakin, S&S, Sturgis Buffalo Chip, Lucas Oil, Led Sled Customs, Metzeler Tires, and so on, all were there at the Donnie Smith Show 2017. 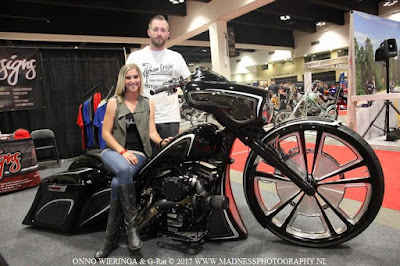 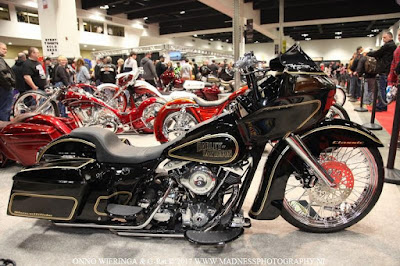 Other builders with cool bikes include Curtis Hofmann, who builds cool baggers, and coolest of all for me is by far the Shovelhead lower than low bagger by Hofmann design, of which a feature will follow soon. After checking out the bike show, next thing to explore was the HUGE Swapmeet, one of the biggest indoor swapmeets we've ever seen. From very old to brand new parts, it was all there. On the first floor the Classic & Custom Car Show was another attraction, where Hamster and show organiser Neil Ryan was so kind to show me around, thanks! And then there was the Tattoo Convention one floor higher. 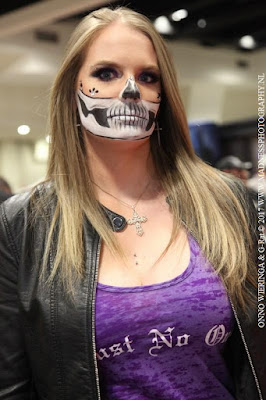 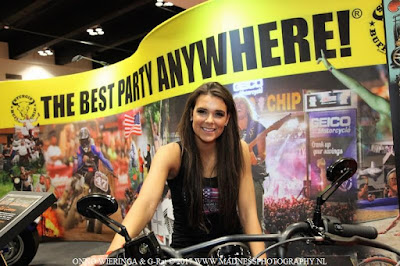 If you wanted to see everything, one day was not enough, and we were glad we came for the whole weekend.
Too many famous builders to name were at the show, having a great time and enjoying the conversations with other builders and the public. And so did we, a BIG THANKS to all the Hamsters, especially Greg Wick and Donnie Smith for your hospitality and friendship!