Get ready for Paul Sr. and Mikey's next big appearance at the MBE in Verona, in the third week of January.

Motorcycle enthusiasts and companies based in Europe will get to meet their heroes at the most anticipated weekend in Verona from 20 to 22 January, 2017 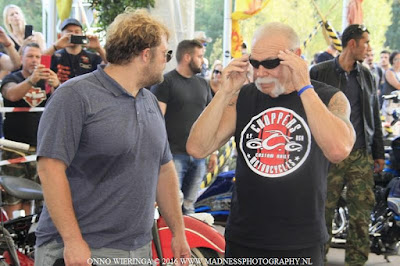 The Motor Bike Expo has always been a distinguished show due to the calibre of the guests involved during the three-day winter weekend dedicated to two-wheeled passion. The most famous people in the world custom scene continue to choose MBE as their opportunity to interact with the Italian public.

For the 2017 edition, the MBE staff, led by Francesco Agnoletto and Paola Somma, are developing a program as well as a list of special guests designed to get hearts racing for everyone present. Among those who have already been confirmed are Paul Sr. and his son Mickey from World famous Orange County Choppers. They will be launching their latest range of apparel for the European market with Burning Rubber UK Limited, who have signed an exclusive 3 year plus deal with OCC, through Rocket Licensing Ltd. Paul Sr and and Mikey will be meeting fans and signing autographs at the OCC Stand in Hall 3, booth 16F.

The company, founded in 1999 by Paul Teutul Sr., has starred in countless TV shows including the hugely popular reality show "American Chopper," which debuted on the Discovery Channel back in 2002, bringing the Custom world to millions of homes, drawing in viewers and causing an overnight global phenomenon. Working their way into the hearts of fans, they soon gave rise to a genuine "OCC Mania" which chronicled the turbulent story of a family business that had to deal with more and more ambitious projects, extreme mechanical undertakings, and demanding customers.

In short, the reality stars have become widely-recognized public figures; it wasn't uncommon for them to appear on the big screen, such as in the famous movie "Wild Hogs," not to mention the media coverage and the production of memorabilia that accompanied the success of the OCC brand. From movie stars to the NBA and multinationals like Intel and Hard Rock Cafe, the Teutel family have had a long and impressive list of clients from around the globe.

Get ready for Paul Sr. and Mikey's next big appearance in the third week of January. The atmosphere, at the very least in Hall 3, will be buzzing with excitement!
Posted by Onno "Berserk" Wieringa www.madnessphotography.nl at 07:00