British Café Racers – Do the Ton!


This is the first book to solely concentrate on the British-powered café racer motorcycle. Renewed interest in custom British café conversions is illustrated with stunning images of select sporting, racing, and ‘café’d’ British motorcycles. From single-cylinder to four-cylinder variants – see the ‘café’d’ side of British bikes!

Synopsis
Plenty of books have been published about British bikes and their glorious motorcycling racing heritage, but until now none has solely focused on the rich variety of British café racers. a genre created in 1950s Britain by the 'ton-up boys'. 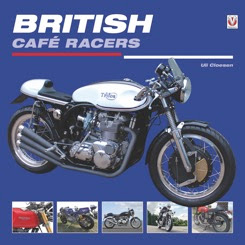 Style, speed and passion combine for an eclectic journey into the world of the British café racer. Uli Cloesen's latest book – the first dedicated to the British café racer scene – is a celebration of all things fast from Britain, a definitive overview of the caféd British motorcycle, from single-cylinder to four-cylinder variants, and going well beyond the parallel Triton twin.
Featuring a truly stunning variety of British motorcycle engine based café racers, from the UK and beyond, and complemented by owners’ stories and technical descriptions, this book presents the eye candy of the British café racer world … come and see the caféd side of Britain!

Additional Information
Café racers are all the rage again, so the theme of this book is right up there with current treds. There are fantastic British engine derived café racers out there, old and new, which appeal to British bike fans, as well as to the custom scene in general. It also shows that the variety of customised Brit bikes out there goes well beyond the proverbial Triton twin.


This book is the first all-out British café racers book,
and covers the whole range of café’d British marques.

Features
• Café’d Brit bikes are way cool, and it shows
• The first, all-out British café racer book, and a celebration of all things British
• Provides a ‘caféd’ window into British motorcycle history
• Fills a gap in motorcycle literature
• A gem for British bike fans, as well as to the lover of café racers
• All bikes powered by British motorcycle engines
• From an author involved with motorcycles for 40 years
• Covers models from singles to four cylinder variants – and from spend a little to spend a lot!
• From AJS to Weslake… it’s all in this book
• Presents the eye candy of historic British brands
Description
British Café Racers – Do the Ton!