“These are the most powerful, most responsive and most comfortable Touring motorcycles ever offered by Harley-Davidson,” said Scott Miller, Vice-President of Styling and Product Development Strategy. “The unmistakable look, sound and feel of Harley-Davidson Touring motorcycles rise to even greater heights with the improvements we’ve made this year. You truly have to ride it to feel it – so we’re inviting all riders to go to their local dealer and take a test ride.” 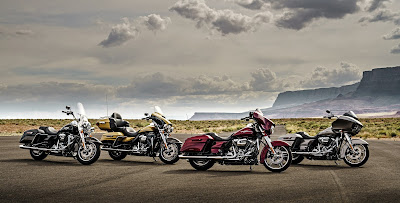 The new Milwaukee-Eight engine, the ninth Big Twin design in the company’s storied lineage, is a clean-sheet design that combines the classic look, sound and feel of Harley-Davidson Big Twin engines with improvements in every aspect of engine performance.

“The Milwaukee-Eight engine carries the legacy of Harley-Davidson Big Twins into the future,” said Chief Powertrain Engineer Alex Bozmoski. “While respecting the essential Big Twin character, we’ve created an all-new motor. Every aspect of performance, durability and styling has been improved as a direct response to the voice of Harley-Davidson customers around the world.”

“Pre-load can now be adjusted to match the load of rider, passenger and gear without tools or an air pump,” said Paul James, Harley-Davidson Director of Motorcycle Product Planning. “Once set, the pre-load will not leak down or require further adjustment.”

With the High Output Twin Cam 103™ standard for all 2017 Softail® models and the S Series cruisers with the Screamin’ Eagle® Twin Cam 110™ engine, Harley-Davidson continues to offer its most powerful cruisers ever.

To experience the transformation of the 2017 Harley-Davidson models for yourself, visit www.h-d.com/discovermore to schedule a test ride.