The sixth annual Vintage Rally at the National Motorcycle Museum was a supreme mix of people and motorcycles. It's a once a year event in the east central Iowa town of Anamosa, and showcases one of America's finest and most diverse motorcycle museums.

Vintage Rally also treated visitors to the first showing of a new Museum exhibit. This year the special exhibit theme is Land Speed Record competition, and Allstate Motorcycle STREAMLINERS presented by J&P Cycles is the exhibition. About 18 bikes and memorabilia tell the story of LSR competition even back into the 1930s. They have the famous Cal Rayborn/Denis Manning Harley-Davidson streamliner that set a record of 265 miles per hour in 1970. And there are various open bikes, some Vincents that prowled the salt but also an outrageous stretched Henderson frame with a Plymouth flathead six that ran 160+ at Bonneville in the mid-1930's.

But outside on the Museum grounds was Vintage Rally 2016 with a bike show that offered somewhat rare bikes, but also the typical, the finely restored, some superb original unrestored machines and a few really nice race bikes. A swap meet, the largest in the history of the Rally, included everything from sculpture created from bike parts to rare antique motorcycle parts, books, magazines and vintage apparel, along with some tent displays including a professional pin-striping demo. 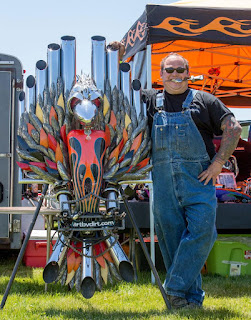 Art by Dirt
We all love the form and sound of motorcycle pipes, but this creative artist creates something you'd be proud to have in your office, even your home!


Back inside the Museum where it was cool and comfortable, and we are surrounded by over 450 bikes and thousands of pieces of memorabilia, three authors spoke on motorcycle history in special presentations. One on the experience of land speed record racing two Vincents, another on the history of the Henderson motorcycle brand, a third lead a conversation on the history of land speed record racing. You were even invited to bring lunch into the presentation hall and listen to a panel discussion on motorcycle collecting giving even the experienced some new
insights. 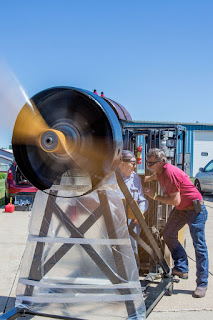 Air show AT THE VINTAGE RALLY? Traveling all the way from Minneapolis, aviation historians Denny Eggert and Bill Miller have been responsible for the preservation of the rare 1911 STECO Aerohydroplane, now in the Museum's collection, though not yet on display. They thrilled the crowd when they fired up the Steco's engine on a test stand. Fundraising work continues to get the one-of-a-kind airplane stabilized and installed in the National Motorcycle Museum.

Motor Maids, Sammie Weisner, from Pennsylvania, Glennadine Gouldman and Ellen Taylor, from Virginia, traveled the long distance to Vintage Rally. They brought along apparel and other great objects representing the life of famed Motor Maid, Helen Kiss Main. Loaning these objects for display, they helped Museum staff get them safely into showcases.

Vintage Rally is an event for motorcyclists of any brand or country of origin interest,
but some go to extremes when expressing their allegiance.

Vintage Rally was fun, had all sorts of great things and people to hang out with, but in keeping with a museum's mission, was truly educational as well. You should have been at Vintage Rally 2016, but if you were not, maybe these photos will explain why you should mark your calendar for next year's event, Saturday June 3, 2017.


Thanks to all of you for making this such a successful event!
We look forward to seeing you next Year. 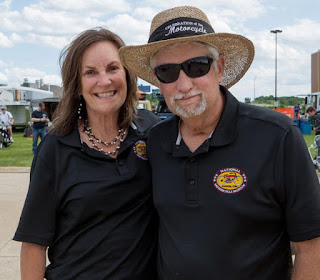 If it were not for the vision and hard work of John and Jill Parham, founders of the original J&P Cycles, now constant "volunteers" to the Museum, there would be no National Motorcycle Museum. Wishing for the National Motorcycle Museum and Hall of Fame, originally in Sturgis, South Dakota, to succeed financially, to flourish and help tell the story of American Motorcycling, Parham brought the Museum to Anamosa, Iowa and injected it with his spirit, energy and ingenuity. 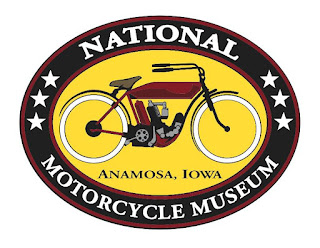