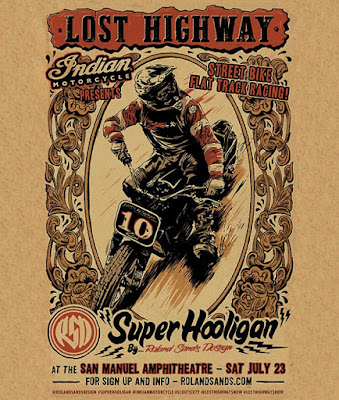 The show was recently named one of Rolling Stone’s “30 MUST SEE FESTIVALS THIS SUMMER", Lost Highway, held on July 23rd at San Manuel Amphitheater & Festival Grounds in San Bernadino, CA. is this Summers’ number one music and motor fest destination. 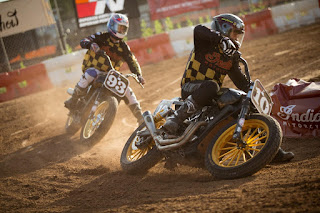 The RSD Super Hooligan race presented by Indian Motorcycle will feature a number of different classes. Modern Hooligan racers, Run What Ya Brung and Vintage bikes will be racing head to head on a specially created track situated between live music. Attendees can expect to see an eclectic group of riders on all types of custom bikes pinning it for glory and the coveted Lost Highway Super Hooligan top podium spots. 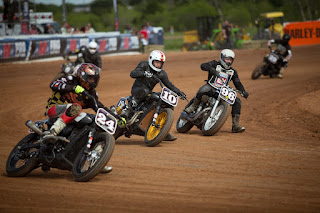 “Lost Highway is the perfect mix of music, bikes and a big party where I think the people will get more than they expected with the addition of Super Hooligan racing,” says Roland Sands.

Having a RSD Super Hooligan Race during Lost Highway is all about taking racing straight to the people who would of otherwise had no idea how much fun riding a motorcycle in a circle can be. Racing motorcycles in the middle of a music festival is insane. And that’s what we hope to bring to the event, a little insanity and good times. 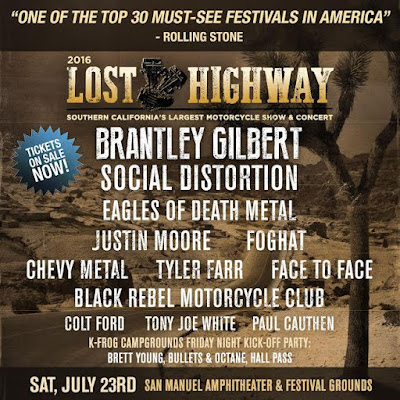 Tickets and weekend camping packages for Lost Highway are available now at www.LostHighwayFest.com.

About Super Hooligan Racing :
With its roots in Southern California motorcycle culture, today’s flat track Hooligan racing category is rapidly gaining in popularity with riders of all ages and experience levels across the
nation. Roland Sands Design and Indian Motorcycle’s recent Hooligan racing efforts are a throwback to ‘30s era racing, when you raced – and could ride home on – any bike you owned. By offering the fun of motorcycle competition in a less structured environment the Hooligan class allows racers to ride their street-legal motorcycles to track, race and ride them home just like the races of yesteryear.

About Indian Motorcycle®:
Indian Motorcycle, a wholly-owned subsidiary of Polaris Industries Inc. (NYSE: PII), is America’s first motorcycle company. Founded in 1901, Indian Motorcycle has won the hearts of motorcyclists around the world and earned distinction as one of America’s most legendary and iconic brands through unrivaled racing dominance, engineering prowess and countless innovations and industry firsts. Today that heritage and passion is reignited under new brand stewardship. To learn more, please visit www.indianmotorcycle.com.

About Roland Sands Design:
Roland Sands Design is a motorcycle, product and apparel company that has its roots in racing, custom bike building and design. Our inspiration comes from a high performance background that blends the love of two wheels with the desire to create unique products. We live the two wheeled life and our crew is a diverse collection of road racers, off-road, dirt track, super moto and custom bike builders and riders. It's this diversity that allows us to work with the best in the industry on a wide variety of projects. Follow all bike builds, new products and the life and times of the Roland Sands Design crew at www.rolandsands.com.