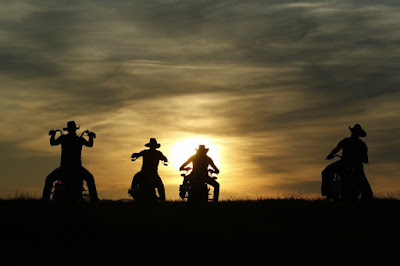 Better, cooler, funnier – and even crazier than last year: The 3rd music video of Custom Chrome Europe will set new standards for "Custom-Promotion". Following "Sexy Thing" (2014) and "This Is!" (2015), "Ride Unrivalled" continues the series of short CCE-clips, which promote "Customizing" in general. The "message": Customizing is adventure, individual as every rider – and great fun! We don't give away the plot – at the time of writing the cutting is still under way – but the "scene shots" of CCE certainly raise curiosity: Custom Chrome Europe goes Wild West! 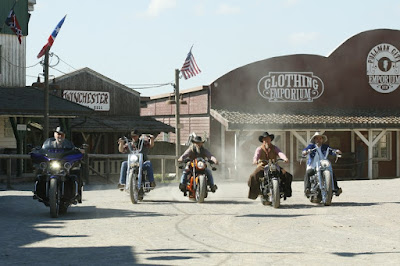 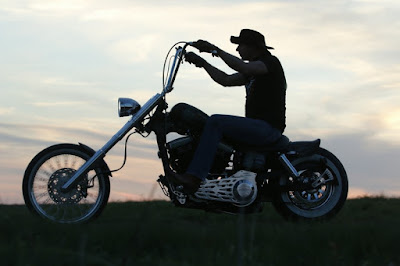 Lonely streets, wind blows dust through deserted side alleys, lanterns rattle in the wind – Carson City in August 1886? A deep rumble is rolling along, but it ain't a thunderstorm, approaching with the long expected and needed rain to Nevada's deserted landscape, relieving the gold diggers from thirst and draught. The rumble comes quick. The Sheriff looks out of the office window, four strangers come into town. Relaxed and cool, he rolls the drum of his Colt Sixshooter, checking the weapon. Will there be trouble in town today? His eyes meet the clock: 5 to 12 – High Noon. A drop of oil to the drum, turns smoothly as silk. The barrel is polished – and the last "troublemakers" left the town lying on their back. Only up to Boot Hill ... 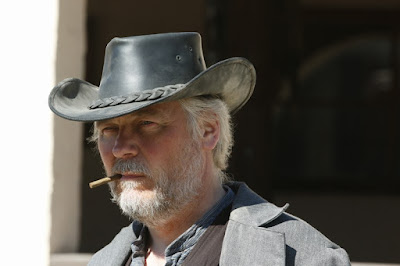 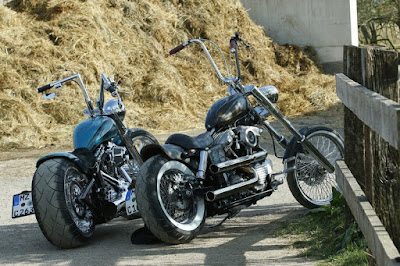 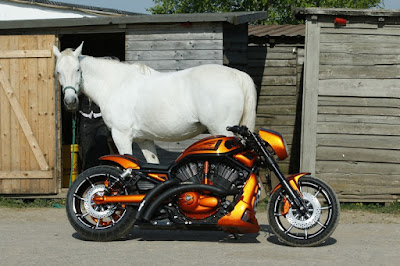 "Two basic ideas formed the concept of the 2016 video-clip", explains "Boss Man" Andreas Scholz, who also envisioned the basic plot for the music clip, "first we wanted a "new start", which means a completely stand-alone new story that would have nothing in common with the 2014/2015 videos which were succeeding stories, but we also wanted to give the Italian Sales Representative Ivano Segato the leading role, since Italy is an important market for CCE. This is also a reason why we opted for a parody of the typical Spaghetti-Western." 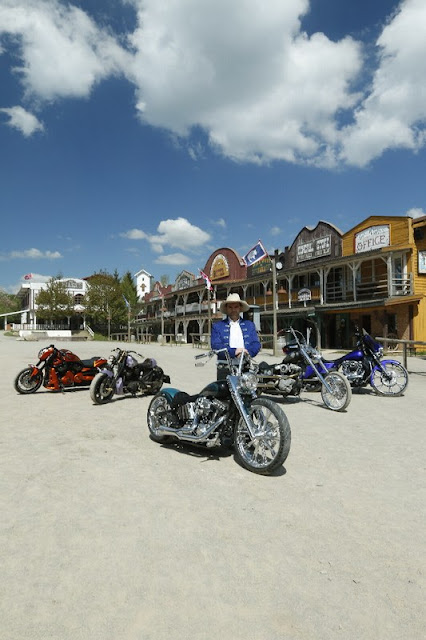 Pullman City near Hasselfelde in the eastern Harz Mountains was found perfect to film "on location" – and a themed Western town that is open to bike riders, too: Every June, the world´s biggest Boss Hoss V-8 Bike meeting takes place here, and the owner of the Theme-Park owns the first-ever homologated Boss Hoss of Germany. Several other Biker-events lure 2-wheeled visitors to the scenic location above Hasselfelde. The challenge: Filming would take place during the week but with the town opened to visitors from 10 am to 10 pm. Visitors, horses, wagons, even longhorns and bisons would be herded through town while filming – just to add to the already existing problems, on "Blacksmith Scene" day a real Blacksmith was working on the horses to change horseshoes! How the horses would react to 4-stroke Harley-sound from open pipes while hot irons are pushed onto their hoofs was not tested – nobody wanted even to try... 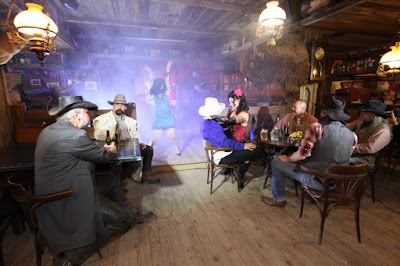 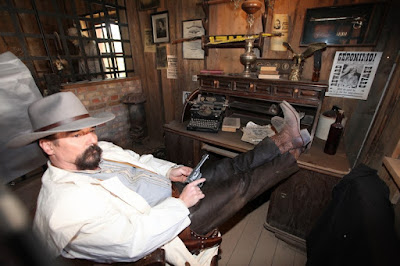 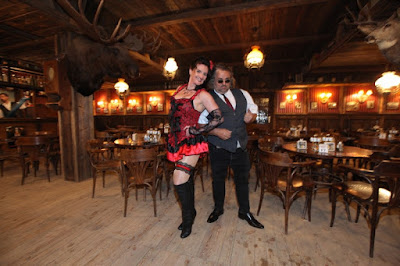 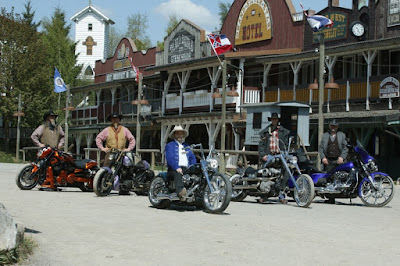 The really "hot" action scenes had to be filmed outside the regular opening times. Getting up early, masking and going to bed late became routine. Fortunately, the weather played along which is not always the case in the Harz Mountains: Even the obligatory "Ride into Sunset" found a nearby location and thanks to the sun for the long-lasting setting on that particular evening! Nobody would believe how often the take was repeated in just 20 minutes! 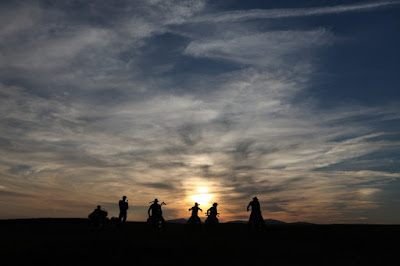 The "indoor-scenes" with party and celebration were filmed between 11 pm and 3 am which is always a good time to party, but re-creating "the spirit", this time with Ruby Shock at 7 to 10 am the same morning became somewhat challenging, to say the least. Three hours of sleep after a long day of filming wasn't easy going, but it's not visible. The film-experienced CCE team is effective and routinely integrated the "newcomers" of the cast: Henryk "Sledgehammer" Willms of HWC Cycles, well known for his "Zero Down Tube" frames, was the closest to location CCE Dealer and not just "acted" his "The Blacksmith" role professionally: He has experience in professional forging – and his old bike shop is rumoured to have looked like an old-school forgery. The part of the "Hole in the Piston" gang was performed by Andreas "Boss Man" Scholz, Carsten "Sharpshooter" Behrens, Michael "Mad Tech" Felde and Helmut "Gunslinger" Sekowski of the CCE headquarter-team in Grolsheim/Germany. Barmaid Simone "Cat Chrome" Messer usually is Assistant of the "Boss Man", but can fall back on a long-time experience with a show-dance team. "Sheriff" Scherer usually whips the marketing-department onto the hard trail traversing the magazine Badlands ... 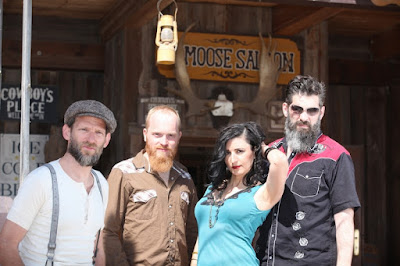 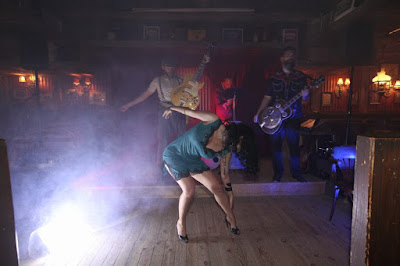 By pure chance, Ruby Shock, cult-band based in Stuttgart/Germany and already delivering a fitting song to the 2015 "This Is" clip, has completed a new album – including one song that fit the theme and idea of the video just perfect: "Morricone" is a tribute song to Ennio Morricone, composer of so many tunes and film music of an uncountable number of "Spaghetti-Westerns". 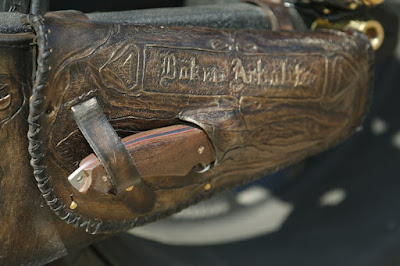 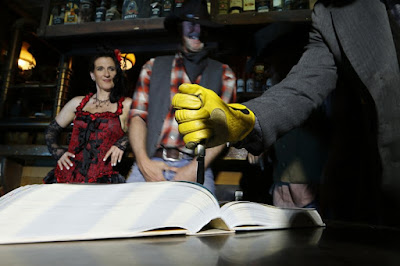 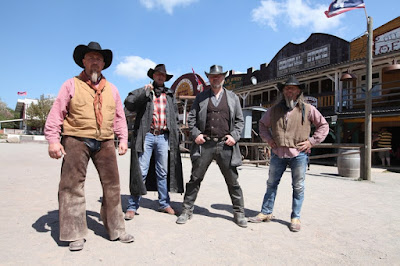 Nevertheless, the "stars" of the clip are five 2016 "Bolt On and Ride" bikes, "roughed up" during the filming really hard. In the unavoidable breaks – let alone waiting for blacksmith to finish his hoof job – cover-, riding-, product- and lifestyle scenes were filmed and photographed on the superb motorcycle roads of the eastern Harz mountains. Then with fitting helmets and proper clothes instead of the "Wild West Outfit" when prowling Pullman City.
"Pony Express", built by Harley-Factory Frankfurt, is based on a 2015 Electra Glide, equipped with Performance Machine wheels and brake rotors, a set of Rick´s hard cases plus tailend, BAHN engine covers, Danny Gray seat, Crusher exhaust system and Ness triple-trees.
Mainhattan's "Greatful Sled" was given a major role – here not to be uncovered, but watch it – and is defined by Ritz triple-trees, TTS wheels, Metzeler white wall tires and black K-Tech controls. The BSL exhaust system added to the Soundtrack at the filming, but will not be heard due to the Ruby Shock tune. 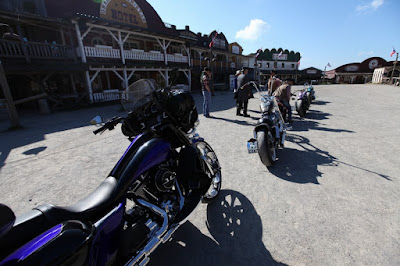 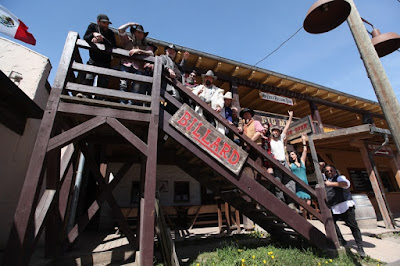 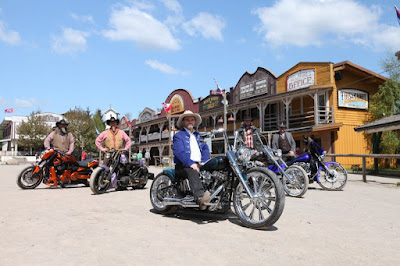 Christian Denstedt of "Maniac MechaniX" created one of the most ambitious Custom Sportsters of the entire "Bolt On and Ride" series ever: "Lily" features complete set of  EMD engine covers, changing the look of the motor completely! Add K-Tech hand controls and brakes, Biltwell exhaust, Blechfee tailend, Öhlins shocks and the (swingarm-mounted) Boeker knife, also used in the plot. Since "Lily" also was planned to score in the field of "Performance", a Deltran Lithium Ionen Battery boosts the starting power.
High-Tech in the Wild West is delivered by the "Gunslinger" V-Rod of Austria's Cult Werk. Actually, the stock original is assembled at Harley-Davidson's Kansas City/Missouri assembly line – can you get any closer to the real old "Wild West"? A complete Cult Werk "Bodykit", including Airbox-Cover (where other bikes have the gas tank ...), tailend, watercooler cover and all other small covers, is mounted – accompanied by RevTech design wheels and RST triple-trees. The BSL exhaust system blows away the dust not just in the streets of the Wild West town: A ThunderMax upgrade allows a few more "Ponies" galloping inside the water-cooled V-Twin.
"The Stranger" Ivano Segato is riding this years "BOAR-Softail" along dusty roads: German authorised Harley-dealer Thunderbike created "Blue Bandit" – another top-bike for Custom Chrome Europe, using Performance Machine design wheels, brake rotors and engine covers plus Biltwell risers. Triple-trees fork-legs and Magnaflow exhaust system are of Arlen Ness origin. 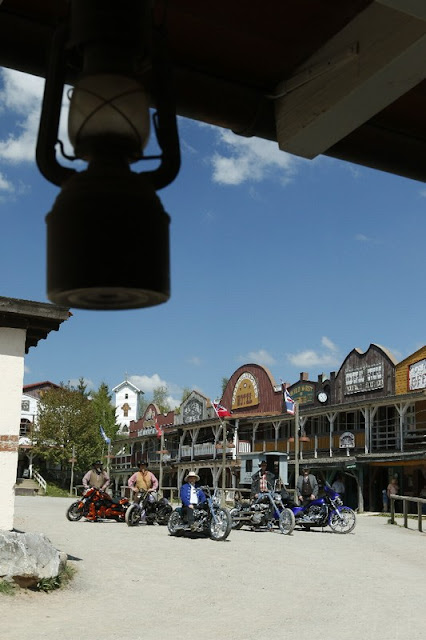 The "Ride Unrivalled" music video clip will hit the web on JUNE 17th 2016 (High Noon, MEZ) at www.Custom-Chrome-Europe.com, soon to be followed by other Internet-platforms," and we hope that the audience will have as much fun watching it as we had filming the clip", states CCE Managing Director, Andreas Scholz, and can't hold back a grin: "The shooting was somewhat "edgy" at the beginning, but in the end, it all came out round." When watching the clip, you'll know what he means: Ride Unrivalled! 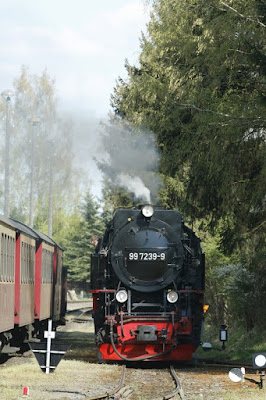 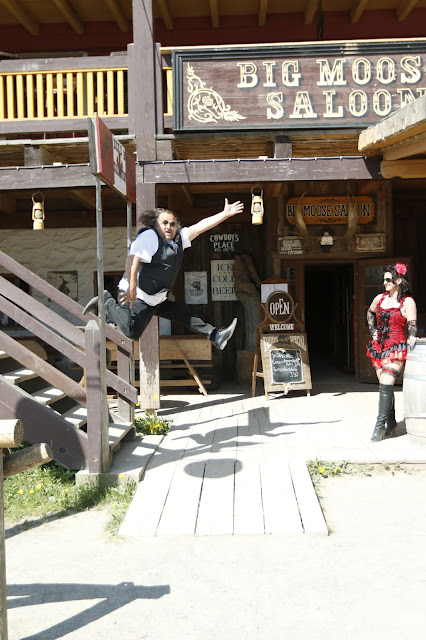