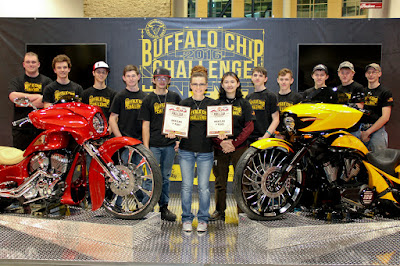 “Winning first place in competition against professionals was really exciting,” said Calvin Tohm, a junior from Spearfish Senior High School and member of Team Indian. “All of the hard work became worth it when they called us up there to accept the award. Going to the Donnie Smith Show taught me how to make a good first impression, and winning that award taught me to make the most of every opportunity.”

The program, developed by Sturgis Buffalo Chip® president Rod Woodruff and coordinated by Keith Terry of Terry Components, was designed to prepare the next generation of American motorcycle experts and cultivate motorcycle industry economic development.  Mentors Randy Cramer of Dakota V-Twin and Chris Malo of Baggster provided hands-on instruction to students from start to finish to create signature builds that fit the style of their teams' esteemed captains, Rusty Jones of Rusty Jones Customs and John Shope of Dirty Bird Concepts.

Students participating in the Buffalo Chip Challenge program are also eligible to earn $8,500 in scholarships with $5,000 going to first place, $2,500 to second and $1,000 to third. The awards, presented by Buffalo Chip President, Rod Woodruff, will be announced in April.

The two award-winning custom motorcycles will be auctioned in support of the Buffalo Chip’s signature Legends Ride® charity event on Deadwood’s Main Street on Monday, Aug. 8.


Those interested in bidding to win one of these award-winning bikes
can visit LegendsRide.com or call (605) 347-9000.