Best Five at the Bigtwin Bikeshow & Expo,
Rosmalen, The Netherlands

Out of the 80+ bikes in the Bikeshow during the Bigtwin Bikeshow & Expo, the Best Five were picked. No classes, no 1st, 2nd or 3rd place, but the Best Five got a trophy and and a cash prize of 750,- Euro's from Bigtwin Magazine in The Netherlands. And it was kind of a reunion for the Prize Winners; four out of five were together on stage winning a prize in 2012 too!
In random order: 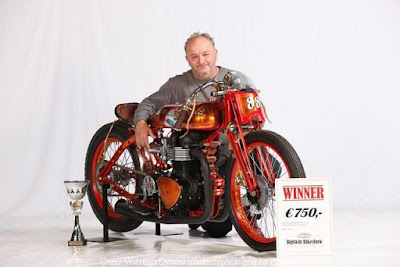 Larry Houghton and his 'Circus of Speed' Boardtracker 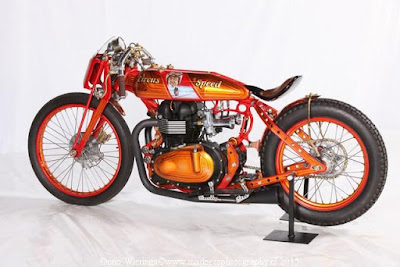 Larry Houghton with his ‘Circus of Speed’ boardtracker styleTriumph. “This bike with standard Triumph Bonneville 2010 engine, was built to replicate a 1920 boardtrack racer, but with a modern twist.” One off rigid frame, one off Springer front, 1970’s 21” front wheeel, 19” rear wheel and the eye-catching alloy tank, made on an English Wheel by Tony at Lamb Engineering, are some of the specs. Congratulations to Larry Houghton from England! 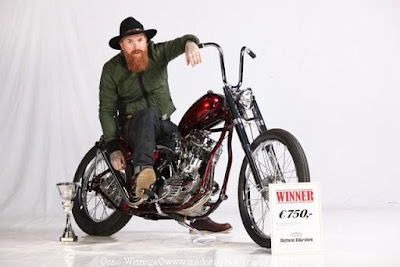 Ben and the Thunderbike Panhead Chopper 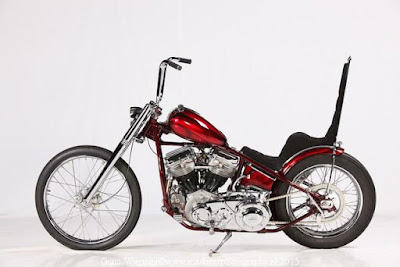 Thunderbike, Andreas Bergerforth from Germany. Not starting, Ben came running onto the stage with this beautiful, smooth and well built Panhead Chopper. “We left the keys in Germany,”laughs Ben, employee at Thunderbike. A 1950’s Panhead with Linkert carb, Thunderbike exhaust and H-D 4-speed transmission. H-D front fork and 19”wheels, a
Thundebike made gas and oil tank. “So smooth and beautiful, it’s like a top model, you want to touch it to feel it and see if it’s real…” 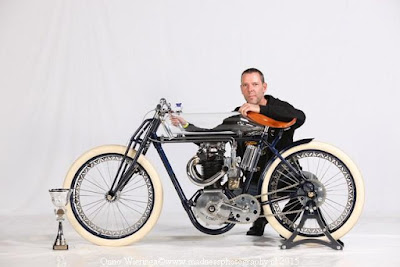 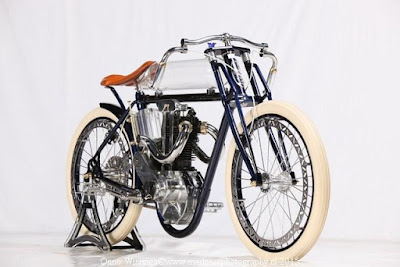 From The Netherlands, Piet Smits with his ‘Breakable’ Boardtracker. A stunning bike with a 1930 J.A.P. 500cc engine, self made stainless steel frame, front forks and exhaust system. 26 inch wheels and a hand blown glass gas tank! The fuel actually is hidden in the top frame tube. The hubs and the oil tank are made of perspex (‘plastic glass’). “No gearbox, the bike has a direct drive, so when I start it, off she goes!” explains Piet. 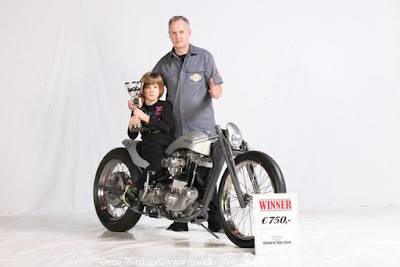 Michael Naumann and son with the 'SimpleIron' 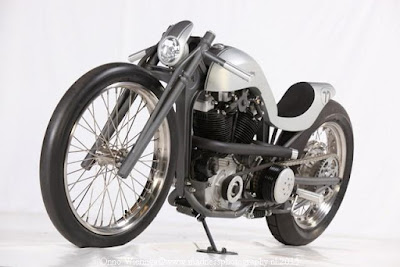 German Michael Naumann showed his newest creation, the 'SimpleIron', a completely self made bike, the frame, gas tank, fender, front forks, all home made. The Sportster Ironhead was seperated from the primary drive and transmission and the cases got cut off. A Bigtwin four speed tranny does the job now. Old style Magneto ignition and an S&S Two Throat carb make this bike work, that is, when you put fuel in the tank, and that’s just what Michael forgot…  Pushing on to the stage, he received his € 750,- cash prize to be sure he can bring a jerrycan next time! 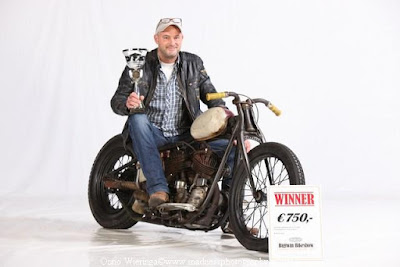 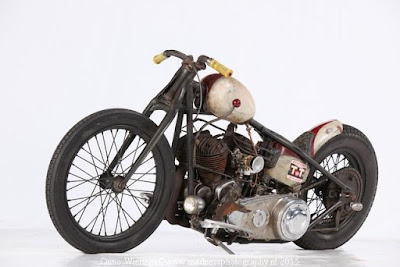 Dutchman Roderick Braunius was the only one that was ‘new’ on the Bigtwin Bikeshow stage, since Larry Houghton, Michael Naumann, Destiny Cycles and Piet Smits all won prizes before in 2012, all at the Bigtwin Bikeshow! His 1947 U-Model flathead H-D Bobber with Tillotson carb and rusty looks is the real interpretation of an authentic bobber. A moped gas tank and cool style elements such as the home made front fork look the bollocks!