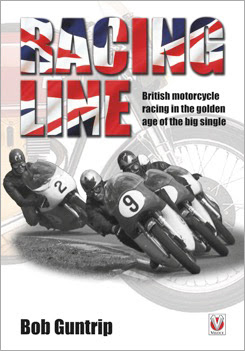 Description
Racing Line is the story of big-bike racing in Britain during the 1960s – when the British racing single reached its peak; when exciting racing unfolded at circuits across the land every summer; and when Britain took its last great generation of riding talent and engineering skill to the world.

Synopsis
The decade between 1960 and 1970 saw British racing singles reach the peak of their decelopment, a decade in which exciting racing unfolded at circuits across the land every weekend, and the decade of Bob McIntyre, Derek Minter, Mike Hailwood, Phil Read, Bill Ivy and Peter Williams.
This book documents the period from the introduction of the G50 Matchless, up to the advent of the Yamaha TR2, and the birth of the two-stroke era – a period of immense change. Britain during the 1960s wasn’t only a nation of pop music and fashion; it was a decade crammed with
the most competitive racing in the history of motorcycle sport. Racing Line tells this story – the ridres, the machines, the drama and the the excitement.

Additional Information
This book is a unique record of the British big-bike racing ’60s, when the country's last great generation of riding and engineering talent combined to dominate the sport.

Tells the story of the last great decade in British motorcyle racing – of Minter, Hailwood, McIntyre, and the epic races that defined the era.