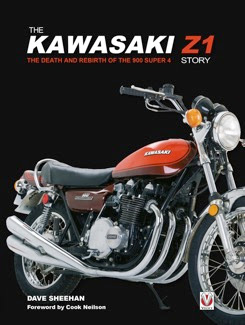 Features
• An unrivalled account of the Z1's record-breaking feat in Daytona in 1973
• From the author of ‘Superbike and the 70s’ – Vintage Motor Cycle magazine’s Book of 2013
• Examines the myths and uncovers the truth about the Z1's first race win
• Over 100 photographs and illustrations, some never previously published
• Reveals not only the bike that shaped motorcycling, but also the era that shaped the Z1
• Sheehan recreates Cycle magazine's seminal Superbike 'Big 7' road tests
• Foreword by Cook Neilson, former Editor of Cycle magazine
• Neilson on Sheehan's account of the editor's visit to Japan to preview the Z1: A great trip, well told
• ‘… it reads like a thriller’ – The Road, Motorcycle Action Group club journal

Description
The Kawasaki Z1 Story tells how the smallest of Japan’s Big Four motorcycle manufacturers nearly beat the world’s biggest to become the first to the market with a Four, and how Honda’s CB750 debut almost spelled the end for the Z-1 … before Kawasaki stunned everybody with something bigger, faster, and better!
Synopsis
Just as Kawasaki was about to green-light the world’s first mass-produced across-the-frame four-cylinder motorcycle, Honda pulled the rug out from under them, unveiling the CB750-4 at the Tokyo Show in 1968. It lit the fuse for what was to become motorcycling’s most explosive decade.
In never before published interviews, with the men responsible for the bike code-named ‘New York Steak,’ Dave Sheehan relates the story behind the Z1’s development; the secret US testing programme in which a team including Imola-race winner Paul Smart rode pre-production bikes disguised as Hondas coast-to-coast across America.
The Kawasaki Z1 Story examines the myth, truth and legend surrounding the Z1’s first race win – of which even Kawasaki knew nothing. Here, too, is the full story of the epic three days at Florida’s legendary Daytona Speedway when a trio of Z1s broke more than 50 speed endurance records.