Dramatically set in the Rosen Plaza Ballroom, Orlando, Florida, bright lights, powerful music and fine documentary video set the stage for induction of six motorcycling greats into the AMA Motorcycle Hall of Fame on October 17. Movie star Perry King emceed the momentous event, inviting each inductee to take the microphone and treat the audience to their personal and heartfelt story. Industry great and J&P Cycles founder John Parham is among the six inducted. "Getting the letter from the AMA about being inducted was a great surprise. While I am very honored to be among so many great racers and accomplished businessmen and inventors, I was totally surprised at being selected. I'll cherish my Motorcycle Hall of Fame ring."

John Parham's current passions are collecting motorcycles and making the
National Motorcycle Museum the best it can be.
This Vincent Rapide is from Parham's extensive collection.

Over the last century of motorcycling thousands of people have made important contributions to motorcycling, but only a select few make it to the Motorcycle Hall of Fame, perhaps the ultimate recognition in the world of motorcycling. The AMA Motorcycle Hall of Fame induction process is rigorous; first you have to be nominated, then over 250 previous inductees and members from five induction committees cast ballots selecting from many candidates, making it official. As might be expected, many past inductees like Wayne Rainey and Malcolm
Smith attended this year's ceremonies. The opportunities to talk with some of the world's greatest motorcyclists during the reception was simply amazing. But when each of the six took the stage, sharing heartfelt stories, demonstrating modesty and reminding us that success comes with hard work, that there may be challenges and disappointments along the way, all 600 in the audience had their attention locked on them.

John Parham is among the six inductees that took the stage in Orlando, Florida to accept their AMA Motorcycle Hall of Fame rings and address the audience of about 600.

The 2015 induction class includes racers Rodney Smith, John Kocinski and Alex Jorgenson, racing team manager Keith McCarty and industry leaders Rich Teerlink and John Parham. Perry King may have summed it up best when he offered, "With the greatest resolve, each of these icons has placed an indelible mark on motorcycling's past, present and future," said King, as he closed out the evening's ceremony. "From their motorcycles that set and broke world records, to inventions and innovations that revolutionized an industry, to the stories of hard-fought victories, from the racetrack all the way to the halls of government, each member of the Hall of Fame is an enduring testament to the steadfast and unwavering ability to dream big -- and never look back."

As this recognition of career achievement is a once in a lifetime event, John and Jill Parham were joined by about 30 close friends and family from all over the country including Bree and Zach Parham and their two children. Zach is J&P Cycles' Vice President and General Manager and traveled from Texas to see his dad get inducted. John Parham currently serves as Chairman of the National Motorcycle Museum. Not happy to rest on his laurels, John and wife Jill volunteer at the Museum as John's current pursuit is preserving motorcycle history and presenting it to the public. "Motorcycling has brought Jill and me great opportunities and forged many wonderful relationships. I feel good about giving back through our work at the Museum." 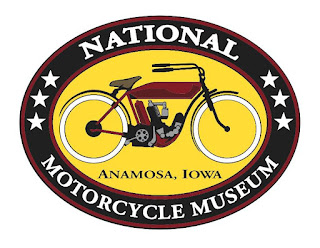 The National Motorcycle Museum is open seven days a week, year around. Museum members are admitted free. Becoming a member is quick and easy on the Museum website.

Museum admission is only $10.00 except during special events. Children 12 and under are admitted free when accompanied by an adult.

The National Motorcycle Museum is a non-profit 501 (c)(3) corporation.

For more information, email the Museum at museum@nationalmcmuseum.org or
call 319 462 3925.

Plan your visit to the National Motorcycle Museum on the web at www.nationalmcmuseum.org
Posted by Onno "Berserk" Wieringa www.madnessphotography.nl at 08:37