Brook Motorcycles - Custom "Out of the Box"
Macesine/Lake Garda/Italy, October 2015

Custom "Out of the Box"
Brook Motorcycles – a new Brandname in Custombikes! 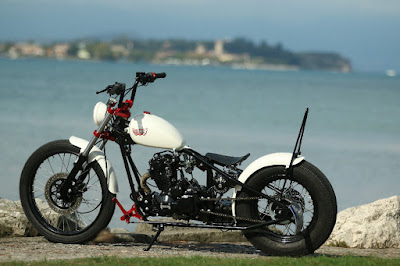 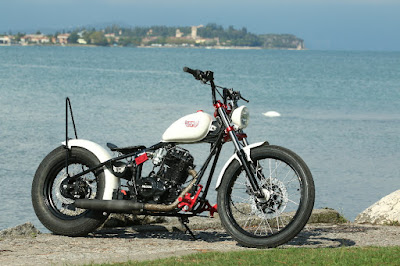 It has become a rare news to announce the birth of a new motorcycle brand, in particular one that is connected with the Custombike scene and offering a stunning option to own and ride a real cool custombike to younger people and motorcyclists that won't start with a Harley-Davidson, Victory, Indian or any other heavy Big Twin. Three years of development, searching for component suppliers and nailing down the production logistics resulted in a quite impressive ride that on October 17th was introduced to the potential dealers, which had the chance not just to see, but to ride the bike at Lake Garda in Italy.

There is little doubt that there is one thing the motorcycle market needs desperately: New and young blood! Watch all big brands realising the rising entry age into motorcycling, add the aging of the current motorcycle riders – and look at what is introduced to the market and sold as a motorcycle: High-tech, fully electronical equipped megabikes that give you all information, safety and riding performance that is available today. What was missing, is an entry-level
motorcycle for "pure" riding, one that is "back to basics" in terms of riding, service & maintenance and also somewhat "customizable" without having massive budgets. 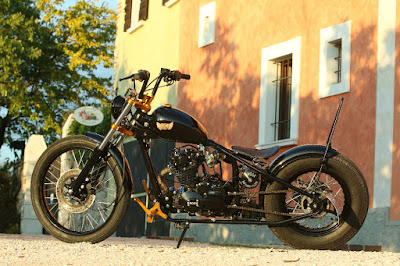 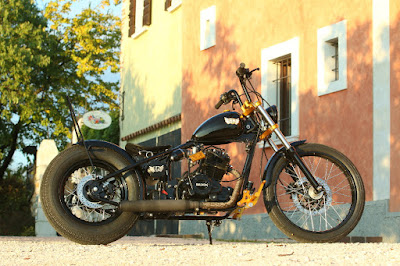 The project came up as a idea about three years ago, when the four Partners that spearhead the new "Brook" motorcycle brand saw the chance for an entry-level custom – and they wanted something of long-lasting quality and reliability. Michael "Brandy" Brandner, Radja Stritzko von Mayhem-Kustomz, Thomas Mergler und Oliver Arnold were aiming for a motorcycle they, their families – and their kids too – would have fun to ride. And that for a long time!
It came down to Brandy and Radja, both established customizers in their countrys with decade long experience to built radical custom motorcycles and Streetfighter to create the style and technology for the motorcycle, starting with the right choice of motorization. 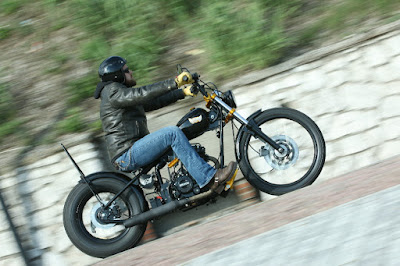 Quite obvious that even the dial-in rides for the engines, performed by the team with limited revs on the scenic roads above souther Lake Garda, was fun  for the team! Late October, traffic has calmed down around Lake Garda, but the weather still allows great riding. The super-agile 115 kg lighweight is handling very easy. The custom look did get great attention from the locals too!

Since the plan already asked for two models which would explore the 16+ market of younger riders and one with a more "adult" displacement and power output, the choice for 125 and 250 cc was made. This would allow the basic frame/rolling chassis combination to be identical and simplify production quite a bit. As it turned out, the choosen single-cylinder OHC 2-valve motor of japanese heritage is also identical in many details, simplifying maintenance even further. It is also one of the reliable motors which is in used in numerous motorcycles worldwide already, but never before in such a "glamouros" role to power a "stock custombike". 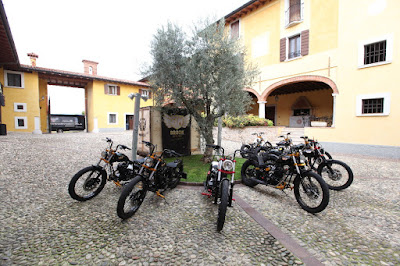 "Stock Custom" is the correct term for such a machine since although the development team had to fulfill all requirements to have the motorcycles homologated for EC-homologation, it had a close eye on what a true custombike should look like: Low riding position, peanut tank, old school attitude with single seat, short fenders, sidemount numberplates and micro-indicators that also act as tail- and brakelights, as miraculously homologated with Harley-Davidson's "Nightster" and now also available for custombike applications and other brands. Every "mandatory" component is there, yet almost invisible and not distracting from the unique look that really blends in with the Custom scene and which you actually can ride into any custombike event. 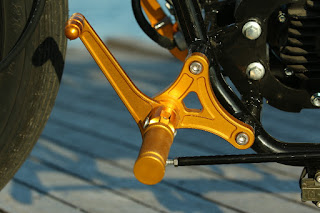 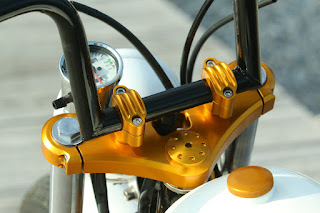 Despite being a "stock" production motorcycle, the bikes are already equipped with CNC-machined details such as anodized triple-trees, forward controls and kickstarter pedals, usually to be seen on expensive one-off customs... 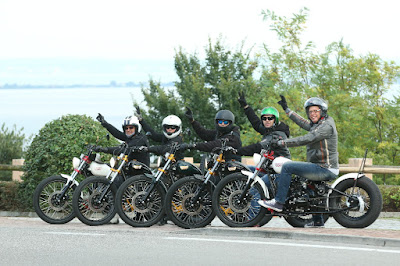 Ready to Ride: The Brook Motorcycles are taken "out of the Box" and the team uses
thursday and friday to dial-in the engines for the presentation.

The performance of the 12 hp 125 cc version and the 16,3 hp 250 cc version is great for riding countrysite and cities, the rigid frame experience is something to get adapted to quickly. Honestly, who is riding his hardtail custom V-Twin on the motorway for long distances? and these have ten times the displacement and six times the horsepower... The "stock" version is equipped with a spring-loaded single seat, but a two-seater version with seventies-style Chopper seat is available for those who want to ride "Easy Rider" style or carry luggage. At the testrides around Macesina above Lake Garda, the roads are small and holed with craters – not to mention the ever-present "speed-bumps" to dampen the fun for speeders – but the front fork takes much of the stress of suspension. Even when purposely "jumping" the speed bumps.

Riding the bike is pure fun, since particular the 250 cc engine offers enough torque to take turns at speed, ground clearance is excellent anyway for such a lightweight and low motorcycle! Downshifting one or two gears to recover soon gets "into the blood" after a few kilomters. This is not a "Bit Twin" by displacement or horsepower – but this bike is meant to be a "Old School" custom motorcycle in every sense: Some European Countries have waited for decades to have rigid frames made street-legal again, so don't complain now that the riding is hard, direct and honest!

Eight European dealers lined up for the bike premiere at Macesina, a considerable bigger number have declared interest, even though nothing but rumours had existed in the last few month when the first zero-series bikes were manufactured. Following three years of hard development work and pouring money into the project, the team itself was truely excited to sit on the bikes and ride them around Lake Garda for a short dial-in of the brandnew engines. Perfect sunshine on the presentation day added to the riding fun, while the potential "Brook Motorcycle" dealers, most of which were decade-long veterans of the European Custombike market, were flown in from their hometowns. The presentation included the unveilling of the bike, short introduction of the men behind the brand, developemt background and a ride-out through backroads ans small towns of the western Lake Garda shore. 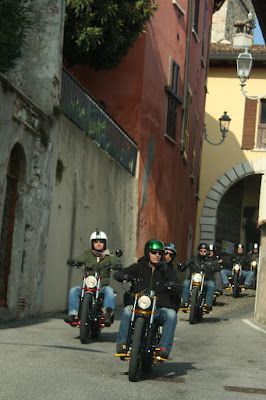 The Brook Gang "on the Road": Eight selected top customizers and V-Twin dealers from 4 different countries were invited to attend the premiere at Macesine/Italy and rode a tour around the scenic landscape and narrow villages above the South-west corner of famous Lake Garda.

The target for these motorcycle is not just the younger audience that want to ride a true custombike, it also the entry rider that doesn't want to mount a 400+ kg monster machine for honing his riding skills. And for those who already have a "Big Twin" of any brand in the garage, this would be a nice addition for short distances, in town riding and easy do-it-yourself customizing, for which the motorcycle is perfect! The "Brook" attracts a completely different client into the shop – and certainly one that later may "step-up" to a bigger machine, but would keep his "Brook" for fun or for the "next generation" in a family that rides. 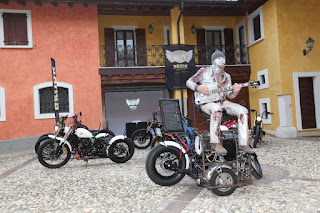 Rocco-Recycle is THE german Music-Artisc/Comedian (some may say "clown") – and since October 17th also "powered by Brook-Motorcycles"! His homemade transportable drum & percussion setup mounted to the sidecar makes him a "One Man Band" which – in Germany – already entertains huge crowds! He also "tested" the Brook and performed both for the Dealers and the Worldpremiere in Berndshofen.

A certain aspect that was taken care of during the development was product quality and reliability – much of the three years was spent on quality evaluations and searching for the best suppliers worldwide. The "Brook Motorcycle" is not just presenting itself as a "premium" motorcycle – it IS designed and built to be a premium product, which will be sold, served and maintained by experienced and high-profile custom shops or brand-dealers that want to add "something different" to their portfolio, attracting new and other clients to their shops. "We have received a very positive echo to the product at this event, both in terms of styling and performance – and the testride proved the dealers that we mean business and this is not a "one-year-wonder", says Michael Brandner, "the testride experience was convincing and we are now looking forward to many ohers to share the riding fun on the Brooks Motorcycles". The introduction of the the business background of both Thomas Mergler and Oliver Arnold – the first one a major player in the automotive supply market automation industry, the latter head of a worldwide operating special-equipment and heavy freights shipping specialist – futher underlined the seriousness of the task. These are the start into the new brand – and more is expected to follow. Other big brandnames started with a wooden shed in a backyard in Milwaukee – this one with a wooden box flapping open at the unveiling of 10 motorcycles in two displacements in the courtyard of a 17th century farmstead in Northern Italy: Custom out of the box!

Sonstiges/Other/Autres/ovenig/Altro/Outros: Get one, have fun!