S&S Cycle Inc of Viola, Wisconsin, is moving its Sturgis Rally headquarters from Lazelle Street in downtown Sturgis to the lot at Black Hills Harley-Davidson.
The company cites the traffic and congestion in the City of Sturgis as a major factor in the decision, with Black Hills Harley-Davidson providing easy access just off the I90 near Rapid City with plenty of free parking (exit 55). 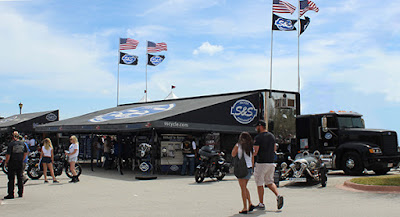 "Come and see what S&S has to offer without the hassle", the company says. S&S will be doing free installations of any exhaust system and/or air cleaner purchased during the Rally.
The move is certainly good news for those dealers, custom bike builders and performance engine tuners who will be in Sturgis, especially in this 75th anniversary year.
The traffic and parking conditions in Sturgis itself have always been "tricky" at best, but with this year's crowds and the added complication of Harley-Davidson's new Rally headquarters re-shaping the visitor geometry, those vendors who set up in the parts and accessory friendly environment and support of the Black Hills Harley-Davidson team will almost certainly be guaranteeing themselves and their customers a more satisfying Rally experience!
Products on show will include their 4” Race Tour slip-on mufflers for baggers and their Stealth air cleaners. "You'll be able to ride home with your Harley looking better, sounding better, and making more power than when you left for the Rally. It’s just that easy, and you don’t have to deal with the craziness downtown.