After missing a shift on a restart and slipping to the back of the pack, Mees charged through the field on his Rogers Racing Las Vegas H-D/Blue Springs H-D Harley-Davidson® XR750 motorcycle to hunt down fellow Wrecking Crew rider Kenny Coolbeth and Bryan Smith. The trio of riders crossed the finish line together, with Smith winning by less than an inch and Coolbeth just 0.013 seconds back in third place on the Zanotti Racing Harley-Davidson® XR750. 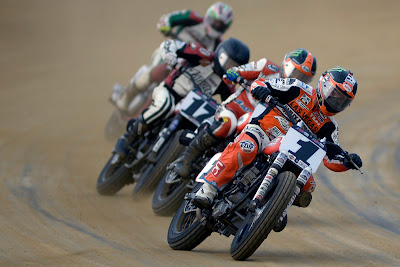 “I missed a shift and fell way back, but my Harley had the power to take me back to the front,” said Mees, the defending Grand National champion. “Coolbeth had checked out with his Harley on the restart but I finally caught him. On the last lap I thought we’d dropped Smith, so when he came up beside me at the finish I was kind of surprised. It came down to a quarter inch. What a great race for flat track fans, and I think the most fun I’ve ever had on a race track.”

After six of 16 races on the AMA Pro Harley-Davidson GNC1 schedule, the top five in the standings is separated by just 20 points. Mees is in first with 96 points and increased his lead over Sammy Halbert from three to eight points. Halbert is second with 88 points, followed by
Smith and Coolbeth in a tie with 86 points, and Harley-Davidson® Screamin’ Eagle® Factory Team rider Brad Baker in fifth place with 76 points.

Baker, coming off a win in the Grand National main last weekend in Lima, Ohio, was on pace to score more points at Du Quoin. Riding the Factory Harley-Davidson XR750 with confidence and blistering speed, Baker won his heat race and the four-lap Dash for Cash bonus sprint race. At the start of the 25-lap main, Baker joined Coolbeth, Mees and Smith in a group racing wide open and elbow-to-elbow on the wide and smooth Du Quoin Mile as it pulled away from the pack. The race was stopped on lap 10 when Zanotti Racing Harley-Davidson rider Henry Wiles crashed. On the restart Coolbeth jumped to the front and broke the draft of the pack, opening a gap over Smith and Baker, as Mees battled through the field. After working with Mees to catch Coolbeth, Baker dropped out of the race on lap 19 with a mechanical issue. Mees passed Coolbeth for the lead on lap 22 but could not pull away, setting the stage for the last-lap charge to the finish line.


The Harley-Davidson Wrecking Crew riders will be back on the track when the AMA Pro Harley-Davidson GNC1 presented by Vance & Hines series resumes July 11 on the Indy Mile at the Indiana State Fairgrounds.