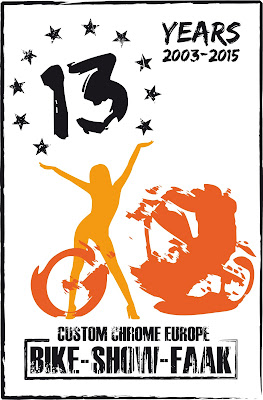 What unites Custom Chrome Europe and European Bike Week forever? The founding year! 1998 was the year of the premiere Harley-Davidson event at Faaker See, back then the European celebration for the brand´s 95th Anniversary. Those who were there won't forget! Since then, the globe has turned several times and Custom Chrome Europe has been one of the anchor points of the Arneitz Custom Show: Activities are many and multifaceted (and some at the current stage still in the planning stages), but beside the established highlights like the "Custom Chrome Europe Ride-In Bike Show" on Saturday and the 2015 "Bolt On and Ride" bikes, a few cool dates and guests can already be confirmed! 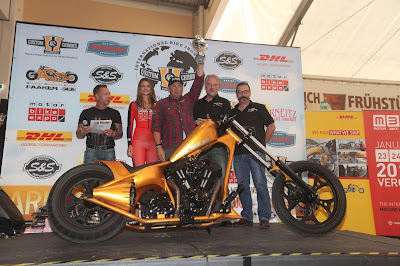 2014 Chopper 2nd
Being renowned for their high-tech state-of the art motor- cycle creations that are recognized worldwide, the team of Viareggio/Tuscany based „Garage 65“ re-defined how a 21st century Chopper can look! Again unique design features with curved forms all over – and the rear triangle of the rigid frame is extended with jet-intake-style covers that house the cooled oil tank on the right and electrical system compo-nents on the left side! Lots of handcrafted sheet metal work on another Marco Cinquini masterpiece! www.Garage65.it

All 2015 "Bolt On and Ride" bikes, this year built by some of the best custom-shops of Germany, will be present for the event – both static at the CCE display or "in Ac-tion" during presentations at the „Arneitz-100 Showmile“. Consequently, CCE's new "Summer Update" – 56 pages featuring brand-new parts by Carhartt, Easyriders Roadware, Chopper Kings handlebar, BSL, Biltwell, Böker, Zassel and many others – will be printed – and some of the
products will be present at the CCE booth. 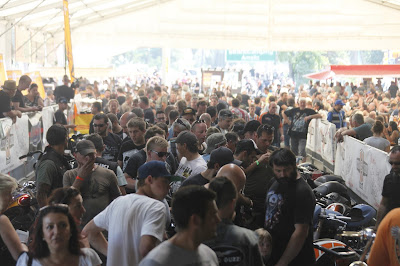 This can be granted for the now CCE-distributed "Victory" customparts, including EC-approved exhaust systems which will be highlighted by Swiss top-customizer Patrick Meyer of PM-Performance heritage who will introduce his award-winning Victory - and Indian customs next to the CCE booth. "Total Customania" is the theme during the days of the "Arneitz Custom Show": This is the only event that Custom Chrome Europe opens its exclusive Fashion Store to the public – lot's of "special deals" in-cluded. If you already want to switch to "Shopping-mode": CCE's re-launched web-site offers a new Dealer Store as well as the complete 2015 catalog and updates online at www.custom-chrome-europe.com. Check it out! 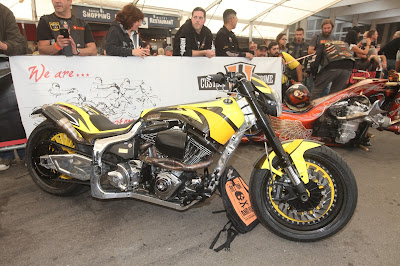 199 RRS by Asso Special Bikes
Asso Special Bike and Carlo Colombo are well established for their radical designs. Their booth has been a centerpiece of the Verona BIKE EXPO ever since its intro-duction. The „Uno-nove-nove RRS“ or 199 RR is one of the latest bike of the series, unveiled at the 2014 MOTOR BIKE EXPO in Verona. Named after its dramatic weight drop below the 200 kg mark for a V-twin powered custombike, the 16 kg frame is completely made from aluminum, a single down tube splits into two box-shaped tubes that hold engine and gearbox. The swing arm is also aluminum-structure using a Paioli monoshock. The hi-tech frame proto-type is hosting a Rev Tech 110“ engine with Baker 6-speed right side drive transmission, which gives the motorcycle a superbly balanced weight distribution. www.assospecial-bike.com

Which "VIP-guests" will answer tech and product questions at the CCE booth in September is still to be determined (in 2014, S&S top engine specialist Scott Sjovall was present at CCE), but the 13th CCE Ride-In Bike Show is a fixed date for Satur-day, September 12th, one of the highlights of European Bike Week. The fully covered „Show-Mile“ at the main road beside the „Arneitz-Custom-Show“ and the Arneitz campground is weather-proof and close to the stage-program and restaurants. Trophies and other prizes given by CCE will exceed € 5.000,00, granting that the Custom Chrome Europe Ride-In-Bike Show at Lake Faak is the bike show with the highest prize money – and not just at European Bike Week! 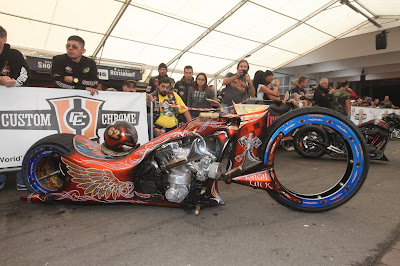 The „Kuwait Riders“ took home two trophies of the Custom Chrome Europe Ride-In Bike Show with bikes built by Virginia-based Flypaper Customs and no limits to style and ridebility. In 2014, they took home to Kuwait the 115 Cubic Inch RevTech motor, no doubt to bring it back next year in a new stunning Custombike.

The entry for the bike show will open „high noon“ on Saturday after the parade, judgement will start at 3:30 p.m. and around 5:00 p.m. trophies will be handed out. The term „Ride-In“ has to be taken literally: Only bikes are allowed that are ridden into the event area: Participation will be international and the winners may be international as well. Even if you don’t make the trophy ranks, the international custom-press will be there on the hunt for the hottest custombikes to be featured in their magazines! The Custom Chrome International Bike Show Series classes are: Championship, Modified Harley, Jammer Old School and RevTech-Performance. Additional classes in Faak are: Chopper, Bagger and Sportster-Engine. 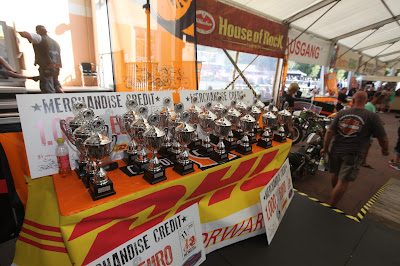 But if you leave the Arneitz Custom Show with the last trophy, you haven't read the 2015 program! The real party is just about to start! 6:30 pm the main stage at the Arneitz Custom Show in the tent directly at the CCE booth will rock, because "Cus-tom Chrome Europe proudly presents: Ruby Shock". The cult-band from the current CCE Music Video (https://www.custom-chrome-europe.com/ueber-uns/cce-videos.html) will perform "live in Faak" on Saturday, September 12th! Handmade hard Rock 'n' Roll at its best – and a stunning stage show that will get the house on its toes! The message from both CCE-music clips "Sexy Thing" and "This Is" comes to Faak: Customizing rocks! 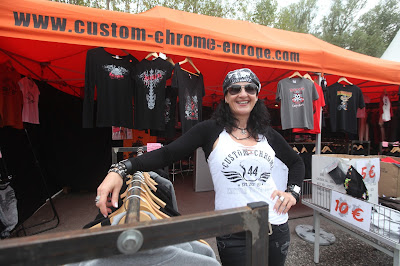 CCE Staff, here Simone Messer, will welcome you at the only "Custom Chrome Europe Fashion Outlet", open only at the Arneitz Custom Show every year! 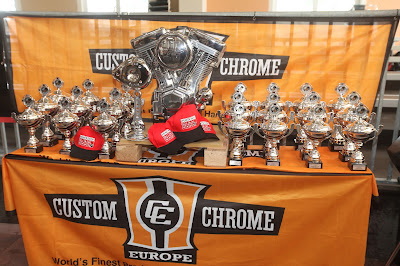 Trophies and more at the 2014 (2013) event: Trophies and other prices given by CCE will exceed € 5.000,00, granting that the Custom Chrome Europe Ride-In-Bike Show at Lake Faak is the bike show with the highest prize money – and not just at European Bike Week! 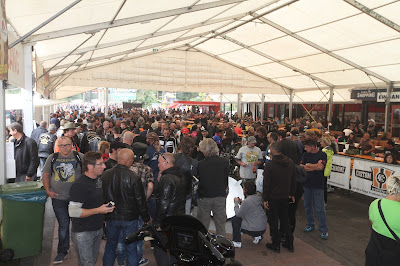 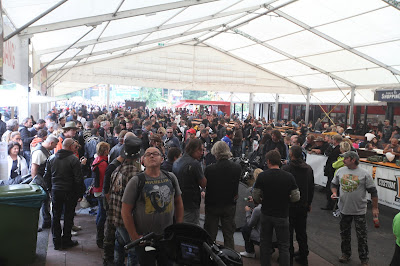 Crowded conditions at the annual CCE Ride-In Bike Show as usual – it is the only show that is weather-proof, thanks to the location!

Sign In at the CCE Show: All entries will receive a "welcome packet" – and the entry fee (rounded up considerably by CCE) is donated to a good cause every year! 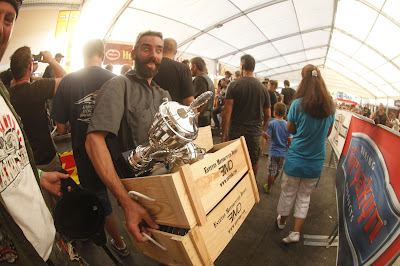 A trophy at the CCE Ride-In Show always make a happy face! 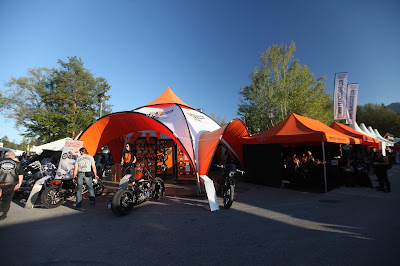 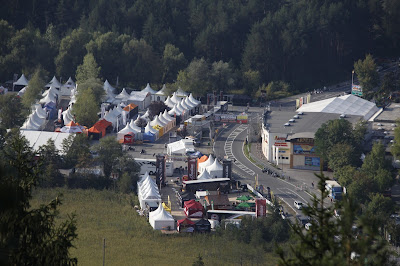 Quiet only in the morning hours: Arneitz Custom Show with CCE tent and "Arneitz 100 Custom Mile" right of the main street, the "Seeuferstraße". 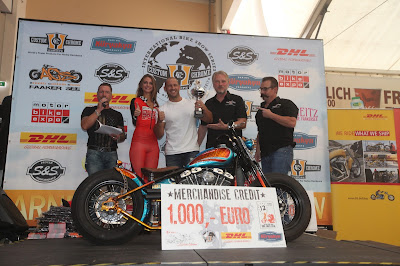 Old School has been a major style in recent years – and the massive line-up of Old-School custombikes and original stock classics would have deserved more trophies or at least some special awards! Best "Jammer Old School" 2014 went to „Viva la Vida“ of Michael Lorenz, built by Naumann & Co 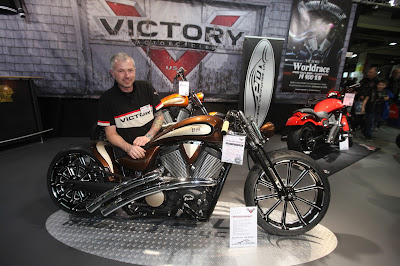 Patrik Meyer of PM-Performance is one of Switzerland’s top customizers: For a few years also specialized for "Victory" motorcycle and recently the new "Indian" types. 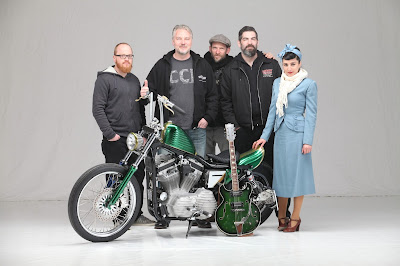 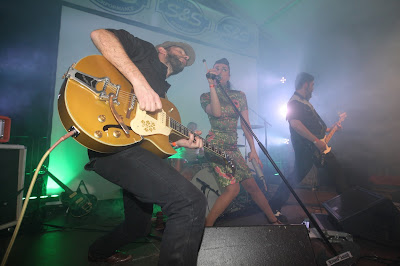 Live at the CCE 2015 "Open House": Based in Stuttgart/Germany and touring all over Europe, „Ruby Shock“ performs stunning breathtaking hard Rock ´n‘ Roll with a stage show that simply blows you away. Songs are written and arranged by the Band themselves offering hard and raw „Punk ´n‘ Roll“ at its best! Check them out or better: Book them! 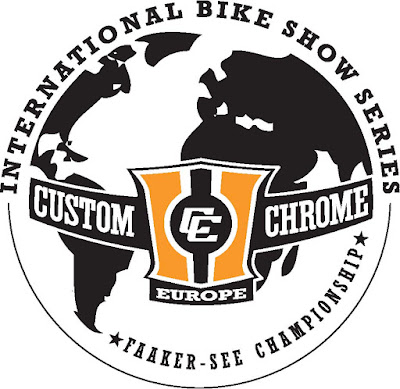