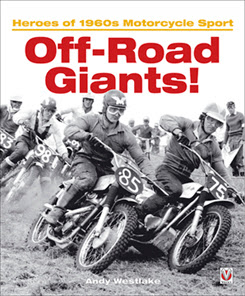 If you can recall watching motorcycle scrambles and trials on your black and white TV during the 1960s, then this is the book for you. ItÂ’s a trip down memory lane as the author recalls boyhood journeys in his big brothers ex-GPO van to watch the stars in action, some of the worldÂ’s best, including scramblers like the Sharp brothers, Badger Goss and Ivor England, trials riders Gordon Jackson, Max King and the Kendalls, and great all-rounders like Ken Heanes, Johnny Giles and the American Bud Ekins. Not only does it include the star riders, but also the main British manufacturers of the time like BSA, Triumph, James, Greeves, Metisse, Cheney and Wasp, the latter two of which are still in existence to this day. However, the book isnÂ’t just about bikes Â– itÂ’s about the people and their stories from illustrious and successful careers on two and three wheels, which makes for a thoroughly interesting and
captivating read.

Features
• An affectionate and warm insight to a truly great era of motorcycle sport
• Profiles of 17 famous riders of the 1960s
• Contains photographs by Gordon Francis, one of the UK’s leading sports photographers: most have never been published before
• Will appeal to both male and female readers
• 126 evocative, period photos

Description
A fascinating and nostalgic compilation of rider profiles written over a three year period, which originally appeared in Classic Motorcycle magazine, and is now accompanied by a new set of over 100 photographs. All of the riders featured became top achievers in their field, although, for some, it was their first interview. During the 1950s and 60s, scrambling especially drew huge crowds to meetings all across the country, and, thanks to TV coverage such as BBC Grandstand Trophy, and ITVÂ’s World of Sport, many of the competitors featured in this book became household names. Each chapter includes the competition years of the riders, and also gives an overview of their careers, and conveys their enthusiasm for the sport.