Having apparently not yet caught up with the realities of Harley-Davidson's sales performance by the end of last year, investors are now seeing the poor final quarter 2014 and first quarter 2015 unit sales figures reflected in recent trading. At the end of last year the share price was still at a near eight-year high at around $69.00 a share, but following the 2014 year-end announcement of a drop in domestic US sales, the price dropped into low $60.00/upper $50.00 territory, with the decline continuing after the second consecutive set of poor quarterlies announced in April for the first quarter of this year. As this edition of AMD Magazine went to press the share price was moribund - trading at the $55.00 mark - a 24-month low.
This is despite the Company increasing its dividend from $0.275 a share through 2014 to $0.31 per share in February, and sustaining that level with its late April cash dividend announcement.

This has added fuel to the already established conjecture that Harley-Davidson was vulnerable to possible hostile bid activity, with the Company continuing to try to "work" its
investor community by maintaining its highest quarterly dividends since their 2008 $0.33 peak. 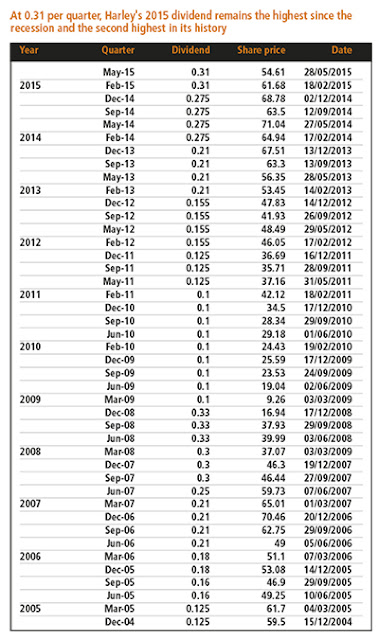 Dividends were as low as $0.10 per share during the recession (March '09 through April '11), with the Company's share price having seen its historic high of over $74.65 per share in November 2006. Having dropped into the bargain basement and back again during the recession (bottoming out at $8.20 per share in March 2009) in not responding to the pimping of the dividend, the present level of stock value is definitely storing up potential problems for the Company, especially in contrast to the performance of Polaris, which has now taken over as the benchmark for the powersports industry.
To put the current mid $50.00 performance into context, Harley's recovery saw their stock price peak at around $73.94 at the end of April 2014 - something in the region of a $20.00 or greater than 25 percent decline in some 12 months or so. 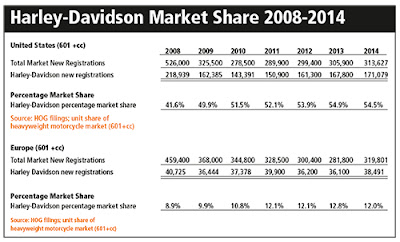 It is five years since the last bout of takeover rumors emerged - when Kohlberg Kravis Roberts (KKR) were cited as being "in-play". Those rumors (and others then and since) came to nothing, but the share price to dividend to sales income ratio is much more attractive now.
With mergers and acquisitions capital more readily available than at any time since 2008, private equity buyers are also likely to now be eyeing Harley's progress this year with considerable interest.