(Mitchell, SD) May 11, 2015 – Klock Werks was tasked by Indian Motorcycle to create a military tribute motorcycle that represents the recent partnership announced between the 114 year-old brand and the USO military service organization. The new Indian Scout was the perfect platform for Klock Werks to build a military tribute style bike reflecting the heritage and roots of the Scout model and creating a ride-able custom to promote awareness of the partnership. 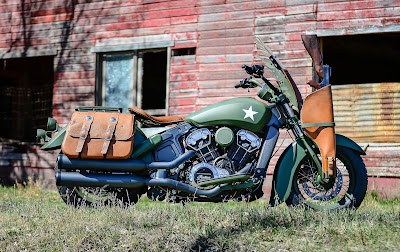 "The USO does so much as a non-profit for the moral of our troops and entertainment during those long stints away from family, we are proud to give back in such a way that utilizes the talents of our team and a great motorcycle like the Scout", said Brian Klock, founder of Klock Werks.

Motorcycles have long been a staple piece of equipment in military ranks used as scouting platforms, messenger units, and military police units. Military motorcycles embodied the power of freedom and adventure that carries through every motorcycle on the road today. The Klock Werks team stripped down the new Indian Scout and rebuilt it respecting the past, but maintaining the modern performance that has taken the motorcycle scene by storm. 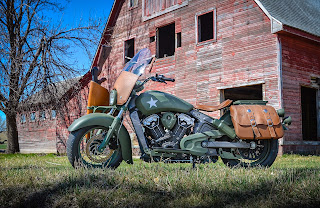 The project nicknamed “Pathfinder” by the Klock Werks team will tour upcoming Indian Motorcycle events, and will make its first public appearance at the Quail Motorcycle Gathering in Monterey California over the weekend of May 15th and 16th. The event features a tribute to
the US military this year and will feature a full collection of vintage Indian Motorcycle and other brand military models as well as customs, race motorcycles and rare brands.

Custom touches on Pathfinder come together to reflect the utility, balance and durability that cemented Indian military models in history. The matte green paint and white graphics were perfectly applied by Brad Smith of The Factory Match. The USO Scout features taillights that are modern street legal reproductions on a custom bracket to mimic the look of military lights.

The saddlebags are an Indian Accessory but were accented by the "Klassic" seat kit that was custom upholstered using the exact same hides as on the saddlebags. The same leather wraps the base of the Indian quick detach windshield for an ideal match. 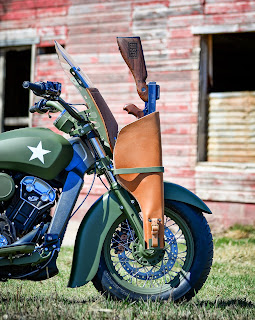 Floorboards replace the stock forward controls and feature custom Klock Werks designed mounting brackets and hardware. The luggage rack is a custom one off billet top with metal side plates featuring the USO logo.

The exhaust has been ceramic coated to blend with the frame coloration. The right side features a "Klassic" round injector cover. The custom gun scabbard mount holds a de-commissioned Thompson sub machine gun with a custom gunstock by Boyds Gunstocks of Mitchell, SD. The USO and Indian Motorcycle logos are both engraved in the stock.

"The balance of custom touches and keeping the bike rideable for future events was critical. We were not trying to recreate an old bike but rather conjure up images of yesteryear while respecting the modern water-cooled powerplant, and innovative design elements", Brian stated. "Klock Werks team took Indian's direction and executed a fully functional motorcycle. The talented team from Boyd's Gunstocks certainly added the frosting to the cake with their efforts. We are fortunate to be able to work with the USO on furthering their cause and be surrounded by the talent in Mitchell, SD."

Klock Werks Kustom Cycles is honored and humbled to have the opportunity to partner with Indian Motorcycle on a project that pays tribute to the outstanding service men and women of our country. With an impressive track record of supporting U.S. troops dating back to WWI, Indian Motorcycle has always believed in the importance of standing strong to support the Military.


To see Pathfinder in person, join motorcycle fans This Saturday May 16th at the Quail Motorcycle Gathering. More information can be found at http://signatureevents.peninsula.com/en/motorcycle/motorcycle.html